Your best friends have been low-key nerds their entire lives. While any of your groomsmen would be down to crack open a cold one or go skydiving with you, they feel most at home when they’re chilling with their feet up in front of the Xbox, or the Playstation, or a Dungeon Master privacy screen. Whatever flavor of gamer geek your pals are, you’ll find groomsmen gifts for them here.

Some things to keep in mind when you’re gifting stuff to gamers: most guys have the library of games they want, and tossing your best friends money for in-game upgrades is kind of tacky. You could search for custom gamer groomsmen gifts, but you’re going to end up with a lot of cheap flasks and weird cufflinks. There are ways to infuse these standard gift items with your geek interests, but we actually recommend keeping those categories separate—unless you find a product that really sticks the landing.

Instead of getting your gamer dudes stuff they probably already own, try to focus on enhancing their lifestyles and sneaking in monograms or personalization whenever possible. After all, the best groomsmen gifts combine the elements of surprise and novelty with the promise of regular use for years. You’ve chosen your best friends to support you on the biggest day of your life—why not ensure your place in their memory with a gift that’ll make your buddies think of you every time they use it?

For the gorehound gamer who attends every PAX East 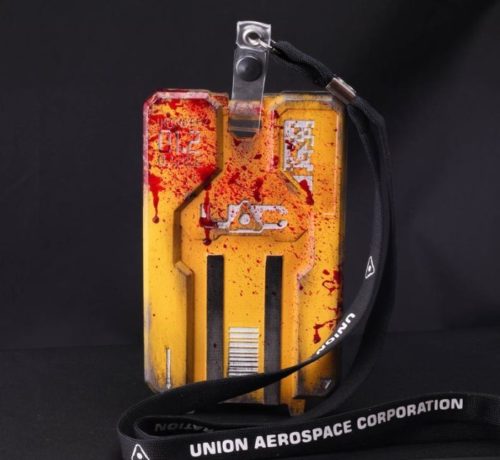 Make your favorite FPS fan’s day with this customized, monogrammable DOOM keycard. Every time they attend PAX East or open an airlock to shoot some aliens, they’ll remember how awesome your wedding was. Pro tip: you can customize the blood spatter too.

For the fine art major who hates conflict 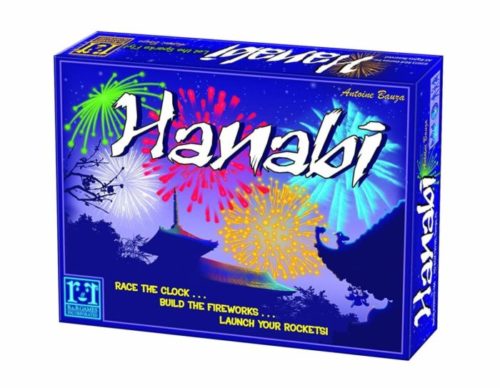 Hanabi is a life-changing board game for any friend who loves playing but isn’t a fan of confrontation. A Japanese classic for peace-makers and crunchy Hampshire College grads, this collaborative game tasks 2-5 players with creating a crowd-pleasing fireworks display—that’s it. It’s pretty meditative, and the game itself is beautifully designed. If you’ve got a groomsmen who considers himself a board game aficionado, this is sure to impress.

For the XBox-loyal geek who's worn down all the buttons 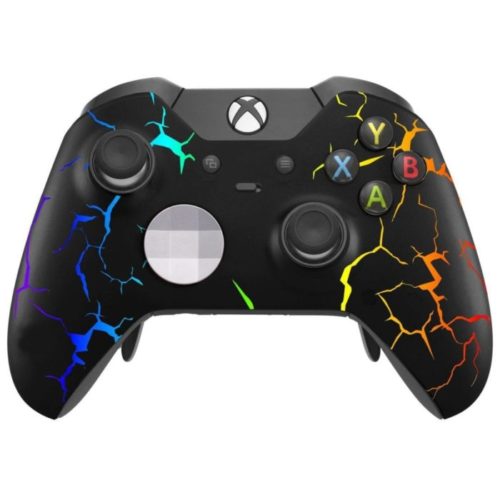 If your Best Man is an Xbox purist, then he’s definitely got his own wireless controllers. That’s cool—no need to mess with a classic. However, we’re willing to bet that your gamer buddy doesn’t have a customized wireless controller with his name literally on it. Thanks to Xbox’s Design Lab, you can throw that bad boy together for him. The interface allows you to choose a color for every conceivable part of the controller, too.

For the retro gamer who lives in a loft apartment 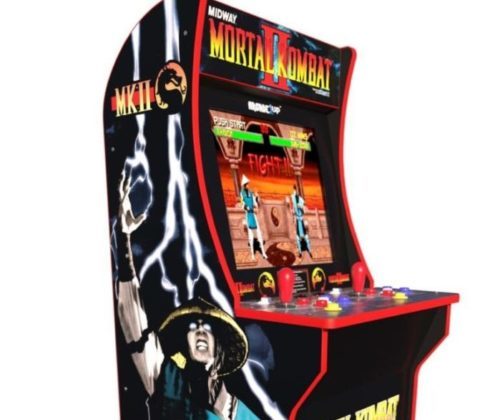 Remember that scene in Big, when Tom Hanks’ character takes his best friend back to his badass apartment and it’s filled with arcade games and bouncy castles? That’s what you’re giving your best friend when you buy him a Mortal Kombat console. This replica from Arcade1UP is fully functional, which means it’ll play exactly like the one you and your friends ran into the ground at the mall, when you were just kids with pockets full of quarters. 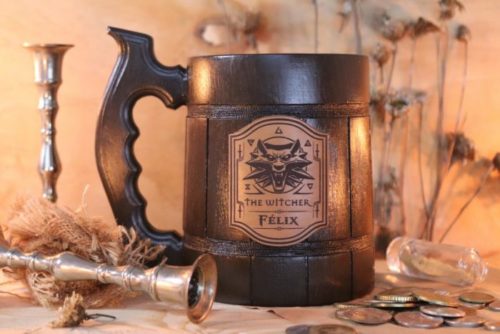 Let your high fantasy dudes drink a frothy beer from their very own Witcher tankards—exactly like the one Geralt might use at the The Cockatrice Inn. This sophisticated gift works for any Witcher fan, of course, but the leathercraft store also offers alternative designs for gamers who prefer Dungeons and Dragons or Warcraft.

For the world history nut who needs new hobbies

So, let’s say your groomsmen were all history majors, and they’ve seen every Tom Hanks WWII project in existence. You can get them the definitive version of everyone’s favorite war game, Risk, and make everyone commit to monthly games via Skype. That’s the gift of community—granted, it’s a community of people trying to steal land from each other.

For the nostalgic gamer who loves 8-bit everything 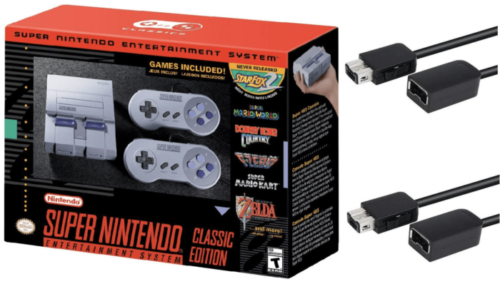 If you and your best friends have been tight since the ’90s, you guys probably played a ton of SNES in your parents’ living rooms. Of course, it’s nearly 2020, so the tech has been upgraded a bit since then. Get your dudes the gift of classic 8-bit entertainment—this time, the system comes with 21 of the greatest games.

For the wise-ass who's tired of playing Balderdash 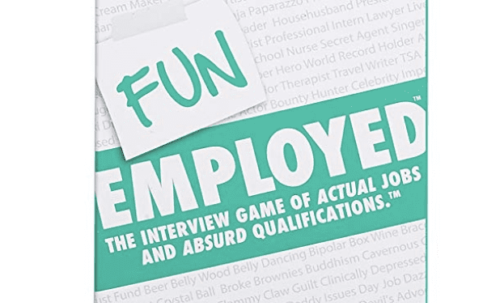 Think of this little card game as a groomsmen stocking stuffer: it’s going to be a big hit once you play, but you probably want to pair it with another, more impressive-looking gift to maximize the “wow” factor. A fair warning: Funemployed works best if you play it with your funniest friends. I don’t mean the guy who knows a lot of knock-knock jokes; Funemployed is for the guys who have made you piss yourself laughing. If you guys are looking for a way to wind down on your bachelor party weekend, make sure someone brings their copy.

For the amateur e-sports player who wants to go pro 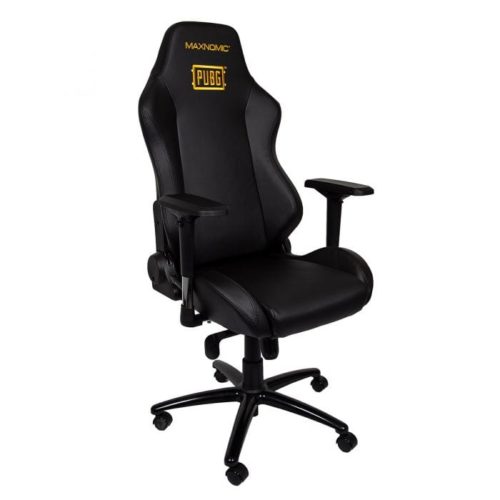 Now, this is a groomsmen gift you’ll have to ship to your friends’ houses, as you don’t want to be caught wheeling around a bunch of gaming chairs at your bachelor party—or worse, your wedding. Whether your friends are Xbox fiends or part of the PC master race, they’ll play like e-sports legends in their monogrammed, professional-level chairs. Oh, and by the way, the Maxnomic is the official chair of choice of Ninja, if that means anything to you.

For the tabletop roleplayer who owns Yeezys

Actor Joe Manganiello dreamt up his geeky streetwear line Death Saves after a lifetime of playing D&D and feeling like a dork. Give your geeky friends the gift of death metal style with one of the brand’s limited edition sweatshirts. This one showcases Orcus, aka legendary Demon Lord and Undead Master of the 333th Layer of the Abyss.

For the D&D nerd who always drops his D20 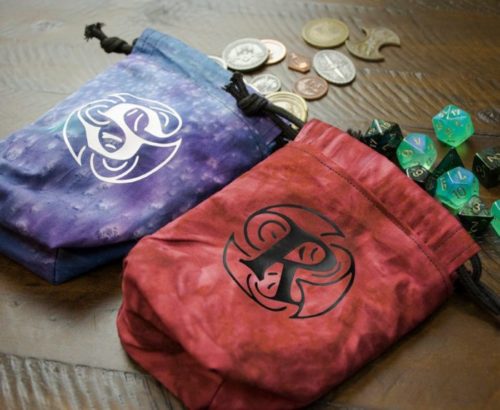 Let your friends protect their D&D stuff in a dice bag that proclaims who they really are. You can choose by fabric, color, and monogram, and if you’re feeling generous, throw in a custom D20 with your wedding information on it.

For the Playstation gamer who needs to clean his room 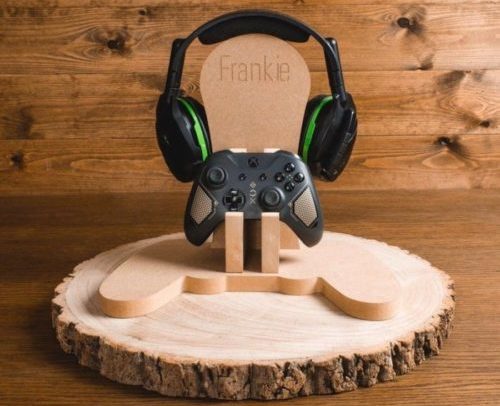 Your friends already have their own controllers and headsets, but where are they tossing those treasured items when they’re done playing? If we have to guess, they’re probably just winding up those cords and letting the pieces fall where they may. Well, no more! Customize a set for each groomsman with his name and a message, and they’ll all think of you when they’re putting their stuff away like grown men.