She’s the one. You’ve got the ring. You’re ready to lock it down. But you gotta decide: do you pop the question in public, or in private? As your (unofficial) best man, we advise you to do it in private. That’s the easiest way to achieve one of the most important aspects of the proposal: keeping the focus and attention on her.

There are four levels of privacy when it comes to a proposal, and we’re going to look at them now, starting with our least favorite and working up (or down) to our favorite. 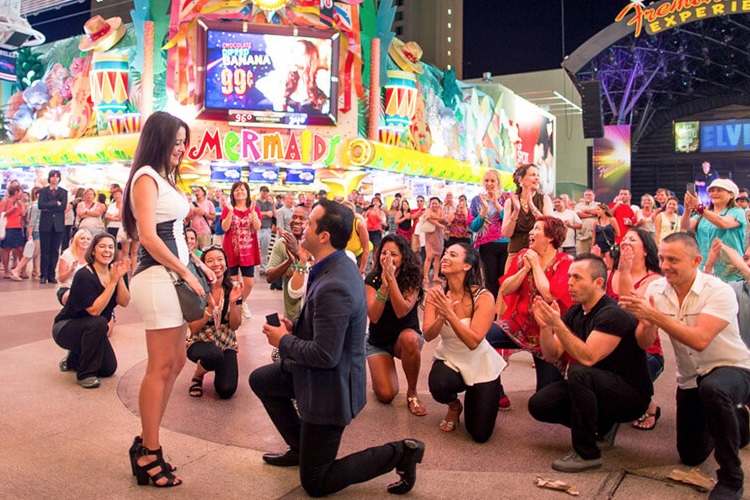 Here’s the thing: the big “event” proposal—the kiss cam proposal, the skywriting proposal, the filmed flash-mob proposal—is played out. Too many people are spending too much time trying to be clever, and to come up with an event that will look good on YouTube.

The proposal is supposed to be about you and your girl. So before you hire that 20 piece orchestra and that film crew, ask yourself a few questions:

If you answered “Yes,” to any of these questions, then you need to shut this thing down. Unless you want to end up on one of those “Biggest Proposal Fails” compilation.

On this level, the proposal takes place in a public setting–in a restaurant, walking in the park, at a national monument, or in the middle of a crowded street–but only involves the two of you. Here you can take advantage of an exciting or personally significant location, without having to pull out all the stops.

If you’re in a public location, you’ll be relying on the general good will of the people around you, and while most decent folks will at least smile when they see a couple getting engaged, some will simply ignore you. A few might be actively put off by your sudden display of romantic intent, but fuck ‘em: this is about you and your bride.

This level leverages an event where the two of you are surrounded by friends and relatives (for example, visiting her family on Christmas Eve).

The family-and-friends scenario is, in some ways, easier than a public proposal, though it can be more intense emotionally. Everyone present loves you (or, at the very least, tolerates you) and will wish you well. Also, it’s extremely flattering to be included in this moment, so your audience will be well-disposed towards whatever form your proposal takes.

Level 1 (Private): Just the Two of You 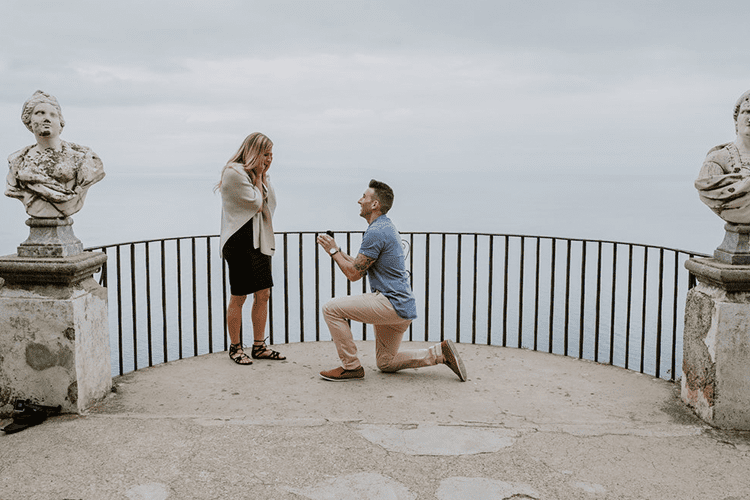 Ok, so you’re not renting a hot air balloon, or asking via Game Day Jumbotron. You’re not popping the question in front of her family. You still need to make it special. Private and intimate does not mean unplanned and unpracticed.

Pick a location that has special significance to her, particularly as it relates to your relationship.

Pick a time when she’ll be relaxed (so, not right after she gets home from lunch with her mom). If need be, help her get relaxed with a well-timed foot rub or some other act of girly pampering. She might get suspicious, but she’ll probably think you’re just angling for some late night sexcapades, not prepping her for the Biggest Romantic Moment of her Life.

Then (and this really holds true for all the above options) get down on one knee.

Check It Out: Find The Perfect Ring With The Setting Finder

Besides, think of the body language involved. By getting on one knee you’re making yourself a supplicant. Your vulnerability highlights the fact that she’s in the position of power: with one word, she can destroy your life or make you “the happiest man in the world.”

That’s a potent feeling, and it turbocharges the emotional buzz this moment is giving her. Remember, the purpose of the proposal is not just to get a “yes.” It’s to get a “yes” that she will always remember giving.

While the proposal itself is private, don’t rob all your friends and family of the satisfaction of hearing the news. Plan to meet up so she can show off the ring and tell everyone the story. It doesn’t have to be that night–maybe arrange a brunch for the next day. But do give them a chance to help you make it official.

Whether you propose in a public place or in the privacy of your home, make sure she remains the focus, no matter who’s watching.