When it comes to public speaking, moving the crowd with raw emotion is far more powerful than appealing to the intellect. Logic is not needed in a wedding speech: whether your toast slays or tanks depends on your ability to connect emotionally with your audience.

Here’s something the advertising business learned long ago: people buy things based on emotion and only use logic to rationalize their purchases after the fact. In public speaking, you have to make people “buy” what you have to say.

Facts are nice, but they’re just icing on the cake. Nobody will care if you flub the date that the happy couple met, or misquote what the groom told his friends about the first time he met the woman he’s about to marry.  But if you mischaracterize the relationship between the newlywed couple, people will notice and they will not be happy.

There are certain emotions you need to generate. Here’s a list of the most important: four emotions you want to evoke, along with ways to evoke them (plus two you want to avoid creating in your audience. Study up and you’ll have the audience in the palm of your hand:

How To Get It: Look Them In The Eye 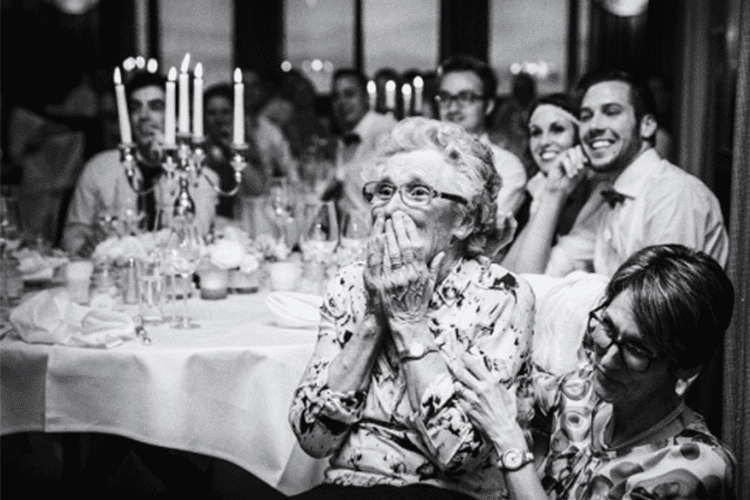 You may not think people are not interested in what you have to say, but they are definitely interested in feeling something. When you address a wedding reception, each guest should feel as if you’re speaking to them specifically, whether there are 10 guests or 200. Shift your gaze around the room and look at various people while you speak. But the entire time, try to imagine you are sitting across the table from someone specific and speak with that kind of straightforward personal warmth and honesty.

How To Get It: Find Electrifying Language

Not all words carry the same emotional charge. Try to find language that will make people perk up and pay attention. When you use vivid sensory words, your audience will feel emotions they have unconsciously associated with those words. Don’t say “I know we’re all happy to be here tonight,” say “I’m almost dizzy with joy at being here tonight, as I’m sure we all are.” Don’t say “This will be a happy marriage,” say “This marriage will be so blindingly, deafeningly blissful, I predict everyone here will have a contact high for at least a year from now.”

How To Get It: Make Them Laugh

But, as we note elsewhere, humor isn’t easy. The surest way to bomb when making a wedding toast is to make a bad or unintentionally offensive joke. Also, trying to rap. Don’t try to rap.

How To Get It: Read The Room

This is one of the easiest crowds you’ll ever face. That doesn’t mean you should ignore the specific beliefs and values of the people you are addressing. Remember, the emotions you’re trying to evoke are the good ones–happiness, amusement, love. If you evoke outrage, anger or contempt, you’ll know immediately. There’s a reason comedians call it “dying on stage.”

Is it an older, conservative crowd? Then don’t mention socialism, unisex bathrooms or rap music. Are you at an orthodox Jewish wedding? Don’t tell the story of how you tricked the bride and groom into eating a pulled pork sandwich. Knowing your audience will help you fine-tune your speech for maximum effectiveness and help you avoid being dragged out into the parking lot and savagely beaten by angry Hasids.

How To Avoid It: Steer Clear of Certain Topics

Unless you are addressing a dog or cat wedding (in which case you are on the wrong site), there are certain things you should never mention, for the simple reason that most humans will find them offensive or upsetting. Cancer, the Holocaust, incest, the slave trade, car crashes, murder, rape, flatulence, vomiting, diarrhea, cable bills and infidelity have no place in a wedding toast.

How To Avoid It: Dial It Back

Your tone, volume, pace, and gestures should mirror your emotions. If what you’re saying makes you choke up, then by all means choke up. If you feel like laughing, then laugh. If you’re moved to the point of tears, thcen shed a few tasteful drops.

But remember: you’re not auditioning for an episode of Empire. If you oversell the emotions and drama, you’ll just end up annoying your audience, shifting the attention away from the couple to yourself. People won’t be saying “What a lovely speech,” they’ll be whispering “What the fuck is up with that guy?”

Emotions are the most important element of a wedding speech. Use every tool at your command to engage your audience with the right emotions, and you will win the wedding toast MVP award. Hands down.