Spain has culture, art, wine, beauty, food, wine, romance, food, wine, sport, beer, crazy architecture, design, food, wine, and a language most Americans should be vaguely familiar with. Honestly, what more could you ask for in a honeymoon destination?

There is so much to recommend Spain as a honeymoon destination that we won’t do it justice here. One reason: suggesting “Spain” for your honeymoon destination is about as helpful as someone from Spain saying “Let’s go to America for our honeymoon.”  And just like the U.S., Spain is huge and regionally and culturally diverse and as fascinating as your new wife. OK. Almost as fascinating as your new wife. You get the point. You should consider renewing your vows regularly so you can take a honeymoon to Spain every couple of years.

Assuming your most likely point of entry into Spain will be either Madrid or Barcelona, we’re going to assume those two cities are your top contenders for honeymoon destinations. Here are some ideas to get you started (and hopefully returning). 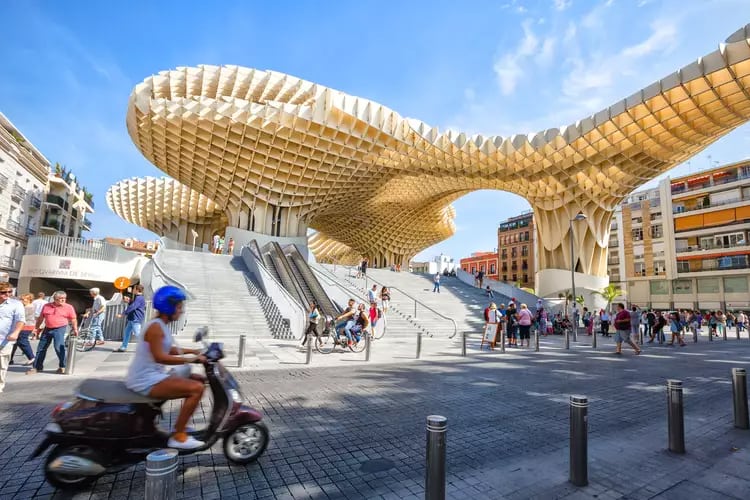 If you find speaking basic Spanish a challenge (Catalan is spoken in Barcelona but everyone speaks Spanish to tourists); you are looking for a resort-style honeymoon; you are not up for adventure; you hate soccer (futbol is ingrained in the local culture—think Leo Messi and Cristiano Ronaldo); or you want to get away from the crowds then Barcelona and Madrid are not for you. Might we recommend somewhere else?

Spain is hot in the summer (July and August) when it becomes a top destination for the rest of Europe (and loud American and Australian tourists). There are no beaches in Madrid—it is literally in the middle of the country—so keep that in mind when picking a destination. Spring and Fall are ideal and while winter can get cold it’s never on par with North American sub zero temperatures. Tourism is a major industry so prices for tourist things will be usually be higher in warmer months.

You can fly direct from the U.S. to Madrid and Barcelona from several major U.S. airports starting from around $500 round trip from the east coast depending on the usual variables—time of year (summer is more expensive), type of airline, and, if you select a flight with a stopover. Pro tip: That flight on Turkish Airlines is a great price because you fly to Istanbul, change planes, and then trek back the direction you just came, not only ruining your body clock but wasting valuable honeymoon time and turning a six hour flight into a 12 hour expedition. So, if it seems like a deal—check why it is a deal.

Go to Madrid If…

You like tradition mixed with cutting edge culture; want to try old school as well modern restaurants, enjoy long lunches served on white tablecloths by wait staff wearing white jackets (even at neighborhood places); tapas, gin and tonic at 6 p.m. with some olives on a side plate, shopping at some of Europe’s best known stores or browzing mazy flea markets, checking out world class art museums, and hitting bars and clubs in hip neighborhoods until dawn (the party in Spain NEVER begins until midnight).

Must Do in Madrid:

One of Europe’s grandest art museums. 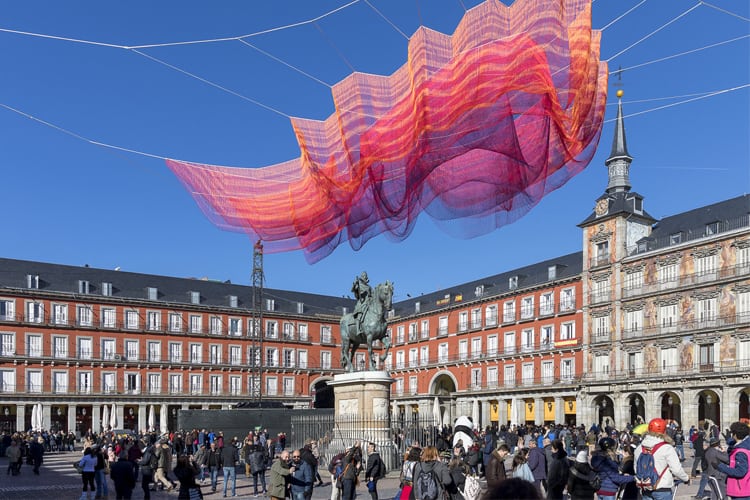 Have a “menu del dia” lunch in an old school restaurant.

Where to hang out in Madrid

Madrid can be an overwhelming sprawl but, like anywhere, different neighborhoods have different atmospheres. Want old school European? Try Asturias, La Latina, or Huertas; for energy and streetlife try Chueca, Malasana, or Lavapies. Warning: what may seem like a dead neighborhood at 2pm can often be bouncing off the walls at 2am.

Stay in Madrid at

Airbnb is worth considering if you want somewhere more interesting than a hotel. There are many hotel options around the city for every budget or level of luxury (fancy people have apartments too, remember) and if dollars are on your mind consider a hostal (a small family run hotel – not a hostel) although that might not be everyone’s idea of romance. If you have the budget check out: 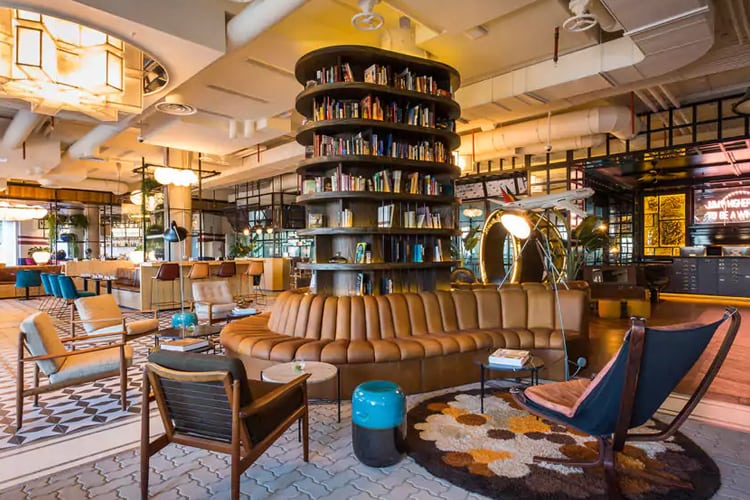 Located near Atocha train station, Retiro Park, and a stroll to bar-lined Plaza Santa Ana, Huertas and Lavapies, Only You features amazing interior design in rooms and public areas. A honeymoon conundrum: go outside and explore the city or spend your entire stay at the hotel. Around $180 and up.

Would you marry us if we said Hotel Unico had Ramon Freixa Madrid, one of the top restaurants in Spain, on site? The building was formerly a 19th century palace. Now it’s a 44-room hotel in the fancy Salamanca district. The opposite of Rodeway Inn. Not that there’s anything wrong with that. Around $280 and up.

Eat in Madrid at…

A family-run restaurant since 1972 close to Real Madrid’s stadium, now run by the eponymous Sacha, the son of the original owners. Sacha is known for occasional whimsy as well as his way with meat. If he’s there, say hello. A perfect terrace for a summer dinner and close to becoming a Madrid institution.

A small tavern opened in 1941 with photos and posters of bullfighters on the wall – and not for the benefit of tourists. Casa Salvador is serious about tradition and about food and serious about bullfighting. Back in the day, matadors would eat here. It doesn’t get more Spanish than this. Take your wife somewhere authentic to channel her inner bull.

Go to Barcelona If…

You love walking through ancient gothic laneways, checking out tiny stores selling everything from high-end designer clothes to anarchist t-shirts; if you and your new wife want to drink wine with locals at a table overlooking a neighborhood square that has been there for hundreds of years; spend the day at a beach just 30 minutes walk from the downtown action, like style, design, and artistic culture.

Must Do in Barcelona

Everyone goes to the Picasso Museum. Don’t be like everyone.

Picnic with Gaudi in this park overlooking the city

Even if you hate sports, a game here may convert you.

Where to hang out in Barcelona

Las Ramblas, the long pedestrian mall that stretches from Placa Catalunya to the sea, is your geographical marker. On one side is the Gothic Quarter or “Barrio Gotico” with its mazy alleyways, bars, and restaurants. On the other side is El Raval, slightly less packed with tourists and definitely more cutting edge. Use your feet and the clean and efficient subway system to explore.

Stay in Barcelona at…

Like Madrid, Barcelona has many Airbnb options, cheap hotels and hostals in the areas surrounding Las Ramblas. If self-sufficiency in a local apartment is not your honeymoon vibe check out:

As well as walking the streets in cool Camper shoes, you can now stay in a boutique Camper hotel and begin your marriage in quirky style. You can also take a very long shower with your wife because the hotel’s water recycling system reuses shower and bath water for its toilets. Now that’s romantic. They throw in a free bike during your stay. Around $200 and up.

A W hotel with ocean views close to the Barceloneta beach area and not too far from the downtown action. The hotel also has a rooftop bar, spa, and swimming pool. Around $320 and up.

Eat in Barcelona at… 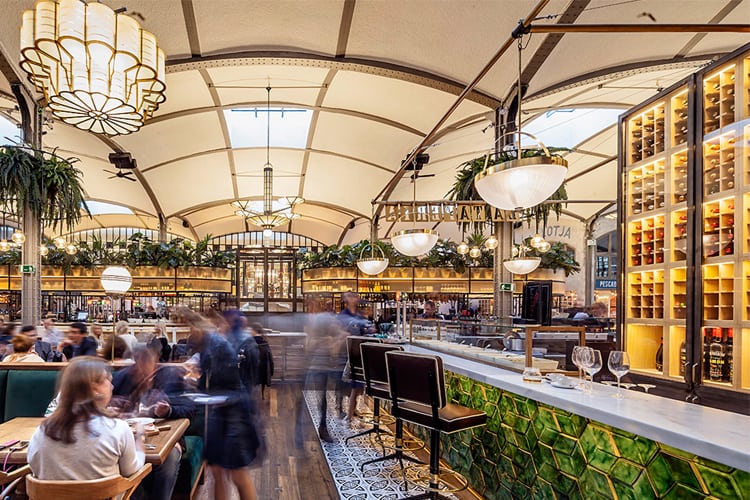 There are thousands of amazing tiny restaurants in Barcelona so why visit El Nacional, a place as big as an aircraft hangar that seats 700? Because this place offers five areas specialising in meat, fish, tapas, rice, and a deli that all highlight Spanish regional cooking. Don’t wanna eat? Try one of the bars that showcase local beer, wine, cava and cocktails – and oysters. The space is unique, too. Prior to becoming a restaurant, the building was a theatre, a fabric factory, a car dealer and – before it became a huge restaurant – a garage.

A 180-year-old Barcelona institution, 7 Portes is blue tiles, white tablecloths, and buttoned-up pro waiters, quality Catalan food, and a reasonable price. Eat at the same tables as Picasso, Miro, and Dali and fellow tourists like Robert de Niro (there are table nameplates for previous diners). Excellent for a long lunch before a honeymoon “nap”, make reservations by email or expect a long wait for a table.

Outside your hotel is Spain…

Maybe your idea of a perfect honeymoon means getting outside your fancy hotel and seeing more of the country than just Madrid and Barcelona. Excellent idea. Like most of Europe, Spain is connected by a modern, extensive, efficient, and economical train network that embarrass AMTRAK. There’s nothing stopping you from seeing more than Madrid and Barcelona to make a truly memorable honeymoon.

From Madrid, consider also visiting Sevilla (where streets are lined with orange trees), Cordoba and its Mesquita, and Granada, home to flamenco dancing and the incredible Alhambra. From Barcelona, take a ride along the Mediterranean coast to the city of Valencia and the region of Andalucia. There are worse ideas than renting a car from Madrid and spending the first weeks of married life touring La Rioja wine area and the Basque region or heading toward Galica in the earthy north west.