But that doesn’t mean you can’t get some amazing luxury — and at a much cheaper price than you would in the United States or Europe. So here’s a little insider’s perspective on the three main regions of Vietnam: The north, the central region, and the south. Pick one for a deep dive, or explore the highlights of this versatile, but manageable, country. 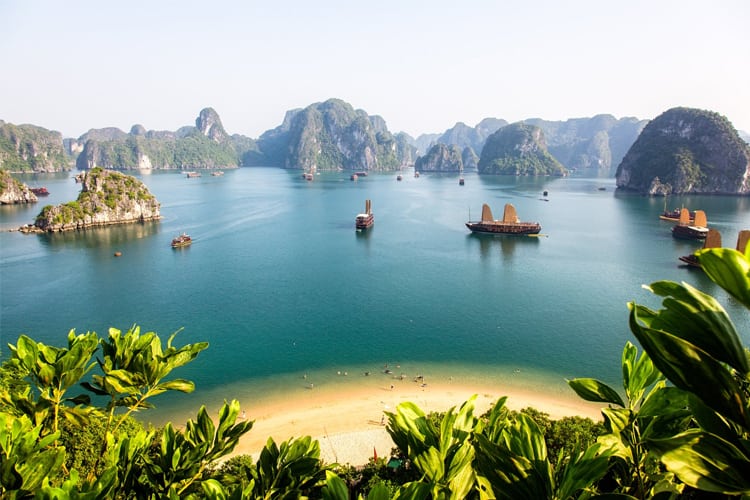 A visit to Halong Bay feels like a trip back in time. Take a cruise through the thousands of islands, admiring the incredible natural landscape and the tiny fishing boat villages scattered throughout. When it’s sunny, you’ll be treated to sparkling emerald waters and when it’s foggy, it’s like traveling through some ethereal other world. It’s an incredible experience and the romance is perfect for any honeymoon.

How to get there:

Halong Bay is pretty remote, but your best bet is to book a cruise that offers a round trip ride from Hanoi. The trip takes about four hours and the buses of the bigger tour companies are luxurious and they all stop about halfway through for bathrooms, foods, and purchasing handicrafts. The ride itself is beautiful, giving you a front row view of rural life in northern Vietnam.

High season in Halong Bay between September and November and March to May. That’s when you’ll find the best weather — but that also means higher prices. For more affordable trips (up to 40 percent off, in some cases) consider going in off-season months. However, July and August can see torrential downpours, so it’s best to avoid those months.

The only place to stay in Halong Bay is on a cruise ship. While there are hotels at the port, there’s no reason to stay on land. Cruise ships range from day trips to two nights and from bare bones to luxury. For a romantic, luxurious experience that includes your own private cabin, complete with a soaking tub with views out the ship window, check out Dragon Legend Cruise. It will set you back about $249 ($240 for early birds or last minute tickets) per person for one night, two days, or $420 ($405 for early birds or last minute tickets) for two nights, three days, and it’s well worth the cost.

In addition to soaking in the views on the multiple decks or dipping in the top deck pool, you’ll have the option to do activities each day on the cruise. These usually include kayaking through the rock formations, exploring a cave, and swimming in the bay. But if you just want to relax and enjoy the delicious food and drink while keeping an eye out for one of the many boat villages scattered throughout the Bay, that’s totally fine too. Extra points if you spot a floating dog house.

The Central Region: Hoi An and Da Nang 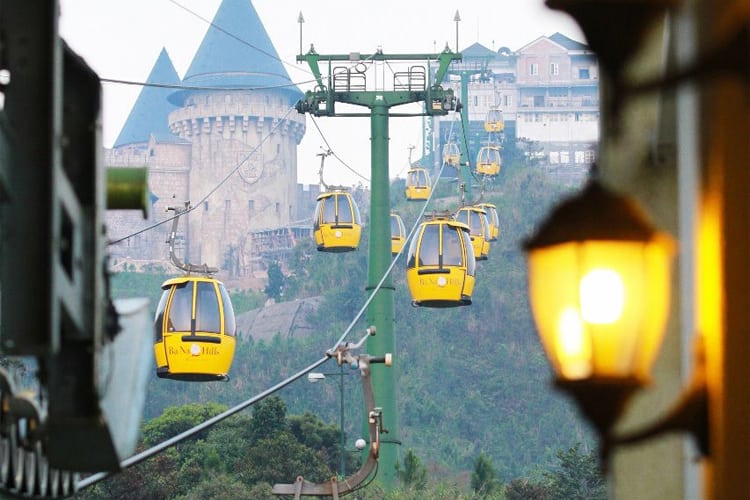 If beaches are more your thing, Da Nang is your spot in Vietnam. Located on the central part of the country’s long, skinny coast, Da Nang is known for its white sand beaches and tourist-friendly culture. Hoi An is a quick 45 minute drive away, making it an easy day trip or a stop all on its own while you’re visiting the beach.

Da Nang has a monsoon climate, so there are two seasons: Dry and wet. Dry season is hot and humid — you can expect temperatures as high as 95 degrees Fahrenheit — and lasts from January to September. Wet season is from October to March, during which time the temperature is cooler (high seventies is common), but it also may rain a lot.

The ideal time to visit Da Nang is between January and March, when the temperature hovers between 67 degrees and 80 degrees Fahrenheit. It might rain a little bit, but not enough to spoil your beach time.

Da Nang has many, many options that are perfect for honeymooners. It’s a beach city, after all! You really can’t go wrong, but if you’re looking for a place to start, check out the Fusion Maia and Naman Retreat.

In Hoi An, the Anantara is a boutique hotel that offers visitors old world luxury. Rooms hover between $180 and $250, depending on what you’re looking for. For super luxury, book a couple nights in Four Seasons Nam Hai, which Forbes calls “one of Vietnam’s best hotels.” Rates start around $700 and you get your own villa.

What to see and do:

In Da Nang, the obvious thing to do is relax on the beach. But the city is fascinating too, especially at night. On Saturday and Sunday at 9 PM, head over to the Dragon Bridge for the fire and water performance. Or take a cooking class together so that you can remember your honeymoon every time you cook Vietnamese food.

Pro tip: Vietnamese cities come at live at night, especially in the steamy central and southern regions. Don’t hesitate to explore after dark for a whole new view of the city. Just keep a close eye on any valuables.

Dan Nang is also a great jumping off point for visiting other parts of the region. In addition to Hoi An, consider heading up to Ba Na Hills, a resort built by the French during the colonial era as a mountain retreats to escape from the heat. Ba Na Hills boasts the world’s longest cable car to get there.

Hoi An is an ancient city with quaint buildings, a bustling market, and — most importantly — extremely skilled and affordable tailors. If you’ve ever wanted anything made by hand and tailored just right to your body, this is the time and place to do it. And if you haven’t, take some time to think about it and pick out designs before you go. Hoi An tailors are world famous for their ability to produce pretty much anything quickly and affordably.

Another really cool thing to do in Hoi An is travel to the Tra Que vegetable village.    It’s the first organic vegetable village in Vietnam. Learn about traditional farming methods and catch your own fish with traditional nets. Even more fun? Everything you catch and grow, you then get to cook and eat right there in the village. It’s a true farm to table experience.

Hoi An became a World Heritage site in 1999 and, to some people, it’s become “like Disneyland” since then. It’s something to be aware of but it’s still possible to see past the tourists and into the old beauty of this coastal town. 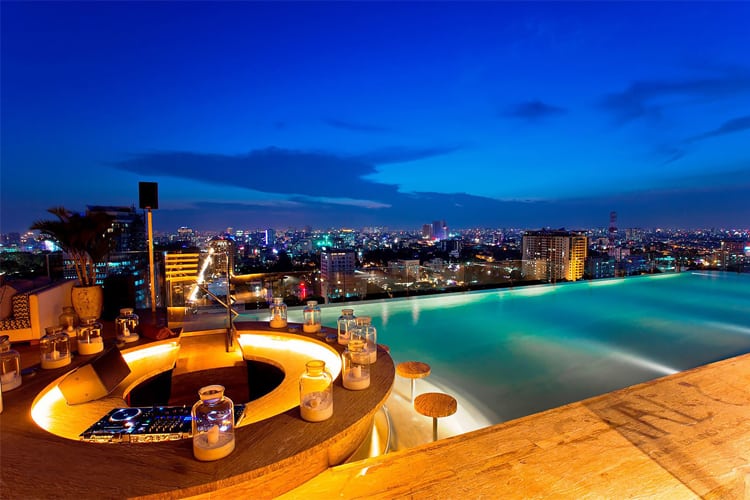 The technical name of Vietnam’s most famous southern city is Ho Chi Minh City, but most everyone calls it Saigon. It’s a hot, bustling, delicious city packed with motorbikes, street food, and buildings that are weirdly skinny and tall. Not for the faint of heart, Saigon will challenge you in ways you’d never considered before — and you’ll probably love her all the more for it.

Weather in Saigon is extreme! From March to May, Saigon is hot, hot, hot — and very humid. Temperatures climb up into the low 100s and most of the city closes down from 11 AM to 3 PM, in order to preserve energy during the hottest part of the day. May to November is rainy season and when I say rainy, I mean torrential downpours that flood the streets. The best months to visit Saigon are December through February, when the weather is still relatively hot but bearable.

Hotel des Arts Saigon is a boutique hotel that’s part of the M Gallery chain. It’s located right in the center of town and boasts beautiful, Asian-influenced decor, a rooftop infinity pool next to one of the chicest bars in town, and both a western and high-end Vietnamese restaurant. The beds are like comfy clouds; the rooftop happy hour boasts drinks that are both strong and delicious; and the food will have you eating until you burst. It’s also totally affordable — you can find rooms for as low as $150 a night.

For a more resort-like feel, the Intercontinental offers every amenity you might possibly need. It’s also conveniently located downtown and — bonus! — their all-you-can-eat-and-drink champagne brunch is unrivaled in the city. Prices are similar to Hotel des Arts.

What to see and do:

When in Saigon, you should absolutely hit all of the obvious tourist things: the Cathedral, Nguyen Hue boulevard, Ben Thanh Market. But some of the more interesting sites can be found wandering the back alleys of the city, were you’ll get a true look at how the Saigonese people live. I always recommend people check out the Emperor Jade Pagoda and then cross the river to explore the alleys there. Don’t be afraid to get a little lost, but do be conscientious about your belongings. Remember: Saigon is a very poor city, so don’t make yourself an easy target for theft.

Another cool thing to do in Saigon is check out Chinatown. The Chinese population of Saigon has been there for generations and they’ve built up an incredible Chinatown, complete with a massive indoor/outdoor market and traditional Chinese temples. Don’t be scared to bargain while you’re there — the vendors expect it.

For a look at how foreigners (read: other Americans and Europeans) live in Saigon — as well as what it means to be a Vietnamese hipster — head to Saigon Outcast for live music. This American-style beer garden features local graffiti art, buildings made from shipping containers, and actually decent beer. It’s a fun way to spend a hot evening in the city.

Of course, no trip to Saigon would be complete without street food! Saigonese people eat a lot of their meals quite literally in the street. There’s even a word for eating “beer food” and drinking beer with your buddies on little plastic stools: di nhau.  You’ll find street food vendors everywhere, setting up their little mobile restaurants in the form of small plastic stools. Generally, it’s a good idea to stick to places that have their own water source and places where there’s clearly a lot of turnover. Markets are generally a good bet, as they’re close to the food source and also are usually pretty busy. But if you’re feeling brave, go for whatever looks good!

Vietnam is no country for unimaginative honeymooners. It’s the kind of place that’s best appreciated by couples looking for the new and unfamiliar.