As far as island tourism campaigns go, it’s hard to beat Antigua’s: The Caribbean island boasts 365 beaches, “one for every day of the year!” If only the honeymoon were as long as the engagement. With its history as a British naval outpost-turned-popular sailing destination, Antigua draws more sophisticated travelers than the rum-drunk spring breakers and cruise bunnies dropping in on nearby Puerto Rico, Dominica, and Barbados. Those are certainly fine locations for your honeymoon, as are these well-known locales. However, once you’re on Antigua, the island speaks for itself: pristine white beaches, turquoise waters, and verdant green hills make it a no-brainer for honeymooners looking for a place to finally relax post-wedding craziness. Plus, there’s rum. A lot of rum. So much rum.

The Pros & Cons of a Honeymoon in Antigua

Like most Caribbean islands, the weather in Antigua is a major plus: It’s the sunniest of the eastern Caribbean islands, and temperatures average about 84°F all year, although December to April is the island’s coolest, driest time (primed for honeymooners). November, May, and June aren’t too different, although prices drop by as much as a third because they’re considered the off-season. But July brings the humidity and August the hurricanes, which both stick around through September and part of October. Trust us; you’re going to want to plan this one with military precision (specifically the naval kind).

Thirteen U.S. cities offer direct flights to Antigua, and there are countless opportunities for connections (it’s a three-and-a-half hour flight from Miami). Antigua is an English-speaking country that widely uses the American dollar, so that shouldn’t cause any hiccups in your travel plans (although they do drive on the left side of the road, like the British, so that might!). But that does make it an appealing cruise stop and depending on where you go on the island; you will run into khaki shorts- and fanny pack-wearing tourists. Because Antigua is so small—the estimated population is currently at 94,731 people, versus 280,000 annual tourists (1,280,000 if you count cruisers)—it might not provide quite the right locale if you’re looking for an exotic honeymoon.

Remind Me: Why Antigua?

Like the rest of the Caribbean, Antigua is known for its beaches, but Antigua offers something most other islands don’t: a rich military history. English Harbor was an important strategic position in the Caribbean for the British Royal Navy, and throughout the 18th century, the Brits used Antigua as their base in the region. Nelson’s Dockyard, which was built in 1955 and made a UNESCO World Heritage site in 2016, is one of the most famous sites. It’s 18th- and 19th-century buildings have been fully restored, and it’s still used as a working dockyard (try not to drool over all the yachts). And at Shirley Heights, you can still see the Royal Artillery Gunner’s Barracks and the Train of Artillery building, as well as the Lookout and Blockhouse. Nearby, you’ll find military ruins at Monk’s Hill, where English settlers first built a fort to defend the island’s first town (Falmouth) back in 1689. If you’re the kind of guy who likes your rum punch with a side of battle history (and yachts), Antigua’s the island for you.

Where to Stay in Antigua 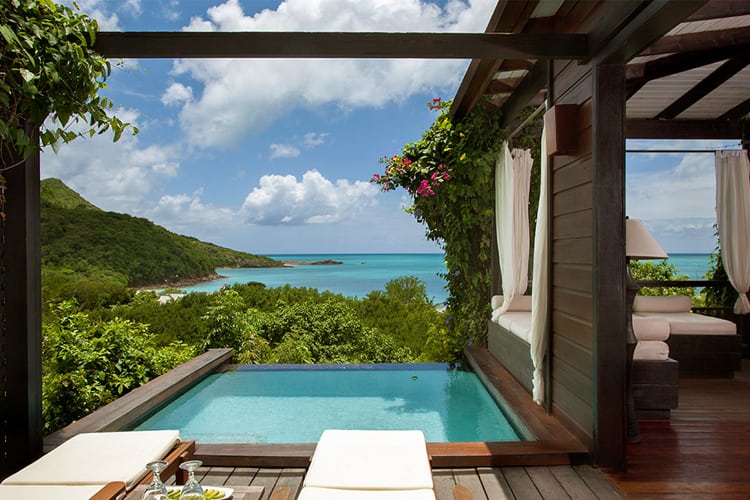 Antigua isn’t big—just 14 miles long by 11 miles wide—so you could stay pretty much anywhere on the island and still have plenty of opportunities to explore the rest of it. But with over 60 hotels and 3,000 rooms, you might as well stay in the area that matches your honeymoon vibe.

St. John’s is the island’s capital in the north, and it has as close to a city feel as you’re going to find in Antigua. There’s a lot of history here (like the Antigua and Barbuda Museum), but most of the cotton candy-colored buildings are restorations versus originals, and this is where all the cruise boats dock, so you’d be fine skipping it, too.

On the south coast, English Harbor is the real historical destination—it’s home to Nelson’s Dockyard. There’s one five-star hotel actually in the Dockyard, The Copper and Lumber Store Hotel; it was formerly used to store sheets of copper and lumber (obviously) for repairing ships. And there’s an amazing bakery tucked right behind the Dockyard Museum.

Out near Jolly Harbor, on the west coast, and to the south is where you’ll find the island’s most deserted (read: best) beaches. Check out Ffryes Beach, Darkwood Beach, and Crab Hill Bay/Johnson’s Point if you want to get away from the crowds.

The east coast is home to Half Moon Bay, one of Antigua’s most beautiful beaches and a hugely popular spot for windsurfing. But other than that, this part of the island is a bit rockier, so it tends to be more secluded—which could be perfect for a honeymoon hideout.

The Best Honeymoon Hotels in Antigua

Honeymooning in Antigua is less about the package (well, the hotel package), and more about location. These five properties provide the white sand beaches, translucent water, and frozen cocktails your honeymoon dreams were made of—and then some.

The five-star Carlisle Bay resort is tucked into its own private inlet west of Falmouth and provides the kind of seclusion newlyweds crave. There are 82 luxurious suites just steps from the sand, four locally-sourced restaurants on the property, an award-winning spa, and a top-notch staff that’s happy to help you arrange any off-property excursions. The Bay Suites, designed specifically for honeymooners, average about $630 per night.

Jumby Bay Resort is so secluded; it’s on its own island (Long Island, off Antigua’s northeast shores). The short ferry ride from the mainland is worth it, because, with just 40 rooms, five restaurants, and as many as 200 employees, you’re guaranteed VIP treatment. There are also two private beaches and stellar golf course. It’s all-inclusive, and double rooms start at $1,095 per night. 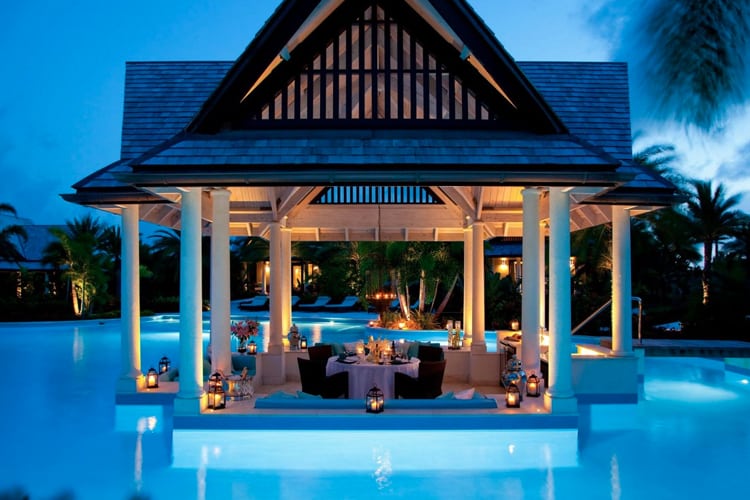 At Cocobay Resort, just above Ffryes Beach on the island’s west coast, your all-inclusive honeymoon escape starts at $540 per night (honeymooners get a 10 percent discount on five nights or more). Colorful pastel cottages dot the hillside above two miles of white-sand beaches, and the deluxe options include private plunge pools right en-suite. There are no phones or TVs here, so if you’re really looking to escape, this is your spot.

North of St. John’s, Blue Waters Resort is a luxurious all-inclusive resort that offers a standard and a deluxe honeymoon option (starting at $536 per night)—the deluxe includes a sunset champagne experience with canapes and private use of the spa’s infinity pool, a one-hour couple’s massage, and a four-course tasting menu at the Cove Restaurant (or a private gazebo dinner with a special four-course menu). Prince Harry stayed here recently, so be aware you’ll have to hear about that non-stop.

Best Attractions and Activities in Antigua 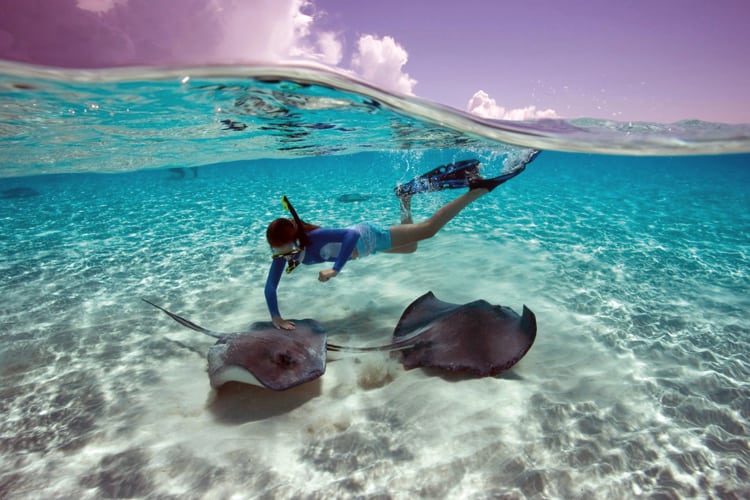 While most of Antigua’s beaches offer excellent snorkeling, Stingray City is the one place you can actually swim with stingrays (snap some Grams of those rays). Experienced guides ferry you off the northeastern coast and teach you “the stingray shuffle” (if only you learned that one for the wedding reception) so you can avoid getting stung, and then you’re free to splash around.

Head up to this restored military lookout and gun battery 490-feet above English and Falmouth Harbours for stunning panoramic views of Antigua (on a good day, you can see Guadeloupe to the south and the active volcano on Montserrat to the southwest). Do it on a Sunday evening, and you’ll find yourself at an epic sundowner party complete with a jammin’ steel band and drool-worthy BBQ spread.

Give yourself a break from the beach for a little thrill. The Antigua Rainforest Zipline Tour takes you over the treetops, across the gorge, and through the rainforest via 13 zip lines (ranging from 52 feet to 328 feet in length), three aerial walkways, one tree house, and two suspension bridges. It’s one of the easiest ways on the island to get your heart racing without expending any effort. Just make sure you’ve packed properly for your many adventures.

Thirty miles to the north, Antigua’s sister island, Barbuda, is much smaller and way less developed—but it’s just as beautiful. Much of the island was destroyed during 2017’s hurricane season, so there’s nowhere to stay, but it’s worth taking a boat ride over to explore the shipwrecks scattering its shores and relax on the beautiful pink sand beach. 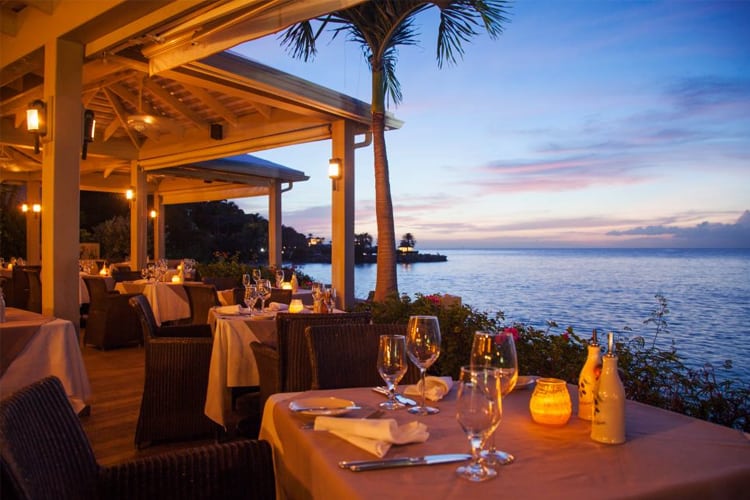 Whether you’re staying there or not, Sheer Rocks at Cocobay Resort is a must for lunch or dinner (or just cocktails) with a view. The restaurant, which serves up a Mediterranean-inspired menu, is poised right on the edge of a cliff over Ffryes Bay and is perfectly positioned for sweeping views of the Caribbean Sea—not to mention, the sunset.

Papa Zouk’s in St. John’s doesn’t look like much, but it’s got some of the best seafood on the island. Try the Carnival platter if you can’t make up your mind—it’s got half a lobster, mussels, and calamari. Zouk’s is known for its rum, too; there are over 250 bottles on offer.

In English Harbour, stop by Grace Before Meals, where you can eat in or grab West Indies takeaway from the pink, blue, and yellow shed. It’s cash-only and no-frills, but the home-cooked roti is to die for, as is the chicken curry.

At Carlisle Bay, dress up for dinner at East, a dinner-only (adults-only-after-7-ish) restaurant featuring Japanese, Thai, and Indonesian dishes. The food is great, but it’s the sexy, dark-wooded interior that will really make you feel like this is someplace special.

And, of course, almost every beach has at least one shack where you can pick up essentials, but if you’re looking to make a day out of it, Jacqui O’s BeachHouse on the west coast (with views of Montserrat) is a great place for seaside sips and eats.