There’s a reason so the beach proposal is so popular. Historically, many monumental moments have occurred on beaches. The Allies landing on Normandy for the D-Day Invasion. Every Sports Illustrated Swimsuit Issue. The ending to the original Planet of the Apes. The beach is essentially the backdrop for human (and sometimes simian) achievements in greatness.

Or maybe people just really like the beach. The warm weather, the cool breezes, the sound of the tide rolling in—these are all things that can put a person in a relaxed state. That’s a great baseline because you’re about the ask the single most important question of your life. You want to achieve greatness so here’s all you need to ensure hearing “yes” to your beach-based proposal and not getting sand kicked in your face.

You’ve got plenty of options when it comes to a proposal location. But why the beach? At least one of you needs to really, really like the beach (hint: it’s the person you’re asking). Did you share a special moment at la playa? Is there one beach you’ve both always wanted to visit? Remember, a proper proposal needs a personal connection. While a beach is generally considered a romantic place to offer an proposal (and a relatively safe one at that) it can also feel a bit generic too. All we’re saying is, just make sure the beach makes the most sense.

The Cons: Lots of people, seagulls, low-tide, sand getting everywhere and in everything

Question: is this beach local, a long drive, or a vacation destination? This proposal is a mission (of love) that needs to be planned like Eisenhower overseeing the attack on Omaha Beach. Some military precision (or at least some good intel) are going to be key. If the beach is local you’ve got near unlimited opportunities to scout it out. If the beach is far away, you’re going to need to do a little homework. Don’t hesitate to call a local travel bureau (yes, and talk to an actual live human being).

What To Watch Out For: 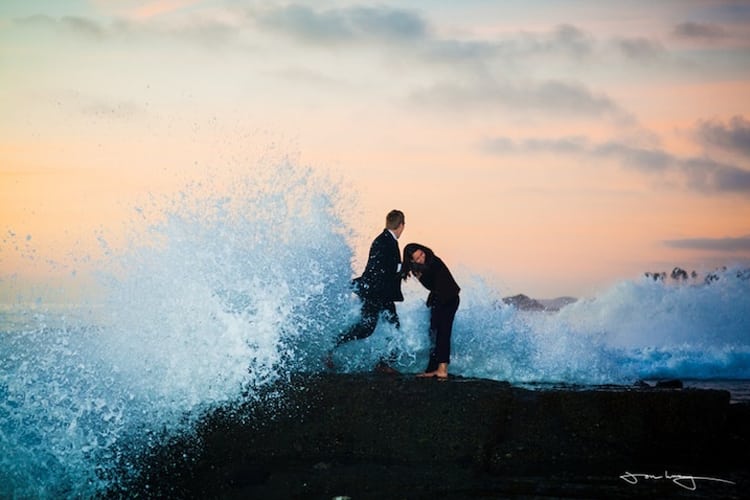 A beach proposal, like any other location, seems relatively simple: show up with a ring, bend the knee, and pop the question. But we want to make sure every little thing is properly accounted for. Here are some of the minor (and major) things you’re going to ideally want to suss out:

What are the beach hours?

Timing is everything, especially if you’re thinking of a proposal at night. No one wants a security guard’s flashlight beamed at them mid-proposal.

Can you bring booze?

Different beaches have different rules but even if the answer is no, you’ve definitely snuck booze into more difficult spots.

What time is sunset?

If you really want to nail that perfect sunset proposal you’re going to need to know exactly when sundown is. Try to time what you want to say with where you want to be.

The tides, when are they?

If you’re going to be anywhere near the water for your pending proposal, be aware of the tide times. High tide might leave you waterlogged and low tide might very well smell awful.

When is the beach most crowded?

Common sense dictates that the mid-morning through sunset are peak times for beach goers. It never hurts to ask a lifeguard.

Is there any planned event already scheduled?

A surfing competition? A regatta, perhaps? The highly unlikely bikini contest? Anything event like these can steal some shine from your big moment.

When is the beach cleaned?

Blame litterbugs or the low tide, but the beach can get messy during the day. Find out when it’s going to look its best (most likely in the morning).

What are the most secluded areas open to the public?

If you don’t want any gawking onlookers throwing you off your game, scout out some areas that feel removed from the masses. Also, check into the ability to reserve a private area, even if it means donating a few bucks to the lifeguard red shorts fund.

Is there any wildlife to be aware of?

We’re talking seagulls here people or other water-based birds who are attracted to litter on the beach. One or two can be cute but a whole colony of them can cramp a proposal real quick.

This is your proposal so it’s up to you to make it feel as thoughtful and original as possible. A message in the sand? Kind of done to death. A message in a bottle? Makes for a much better Police song. Spelling out a proposal in seashells? Quite honestly, kind of lame. Buried treasure? Best left to pirates. These are all tried and true methods of popping the question, but is that what you (or the person answering) really wants? We at The Plunge also wholeheartedly recommend verbalizing “those four words” and not leaving some printed, etched, or sculpted transcription of your intentions.

While just as classic as those previous options, a beach picnic or bonfire has a slightly more personal touch and creates some borders of intimacy in a wide open, probably public area. You’re either eating things or burning things, or eating burned things. It feels kind of primal in a way, especially since you’re ideally trying to lock down your lifelong mate.

Since you’re on the sand and surrounded by sky and water, there are some other options for you. First is the airplane banner, but again, we encourage you to pop the question yourself and not rely on a pilot. There’s also the option to go out on a boat and propose on open waters (or even tied to the dock). Depending on your location, you might even luck into a lighthouse, which is full of all sorts of romantic metaphors.

Any outdoor proposal should turn you into a meteorological expert, at least for that week. If your beach is located in a tropical region, daily storms are the norm but they pass by quickly. Be prepared to punt to another day if the weather report is looking stormy.

Sweating through a proposal is a common issue but if the sun is making your Right Guard work overtime and you’re feeling Ph unbalanced, look towards a post sunset proposal. That might actually help you keep your cool.

We’re not talking nerves here, we’re talking gut instinct. Maybe there’s too many people around. Maybe she’s in a bad mood (although if a proposal doesn’t get her out of it, well, good luck with that). Maybe you both ate something bad. You’re in control of this situation and if it doesn’t feel near completely optimal, you can hold off.

If sun and surf and sand is your thing as a couple, then a beach proposal is rarely the wrong answer. Just remember to keep cool out there.