James used a fake movie shoot to propose to his girlfriend—and fellow actor—Elizabeth.

James Huang and Elizabeth Sandy have both been acting since their teens. In fact, the two met at an audition for a commercial, and soon after began working on another project together. They started dating a few months later, and about a year into their relationship James began brainstorming ways to propose. At the time (2011), phone cameras were still subpar at best, so he wanted a way to film the proposal using professional equipment.  James came up with the idea for a spec commercial with an old-time spy movie feel and a big reveal ending. 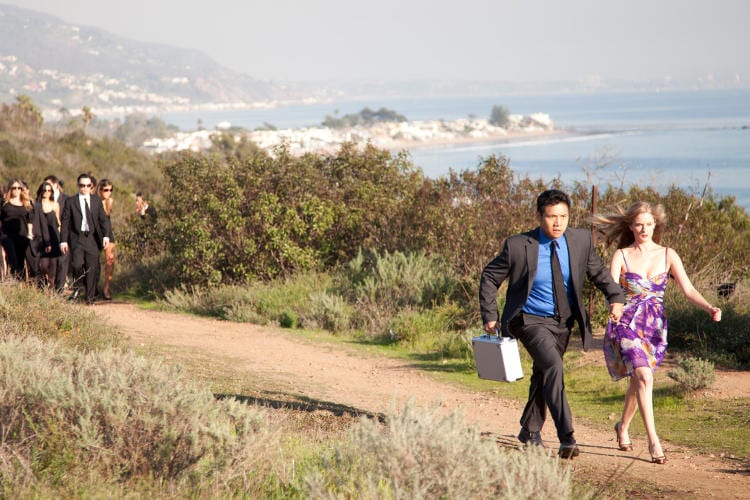 The duo had worked together on many projects before creating sketch comedy collaborations on YouTube, so another film shoot was nothing out of the ordinary. Many of their friends had suggested that they would like to be in these sketches, so when it came time for James to start planning the proposal, it wasn’t hard to gather a willing team of seasoned actors and filmmakers to help out with the project. Between actors and film crew, over 30 friends came together to orchestrate this fake movie proposal (it even has its own IMDB page. Check it out here).

In the film, a full cast of actors dressed in black suits and fancy dresses follows behind the couple in pursuit of a mysterious case that James is carrying. Just as the two approach the edge of a cliffside in Malibu at sunset, James kneels down to open the case (conveniently on one knee). Up until this point, Elizabeth still had no reason to suspect anything was up; she was told that inside the case would be a product shot that would save the day at the end of the film. What James pulled out instead was a ring, revealing his true secret mission: to marry his co-star.

The True Mission Is Revealed 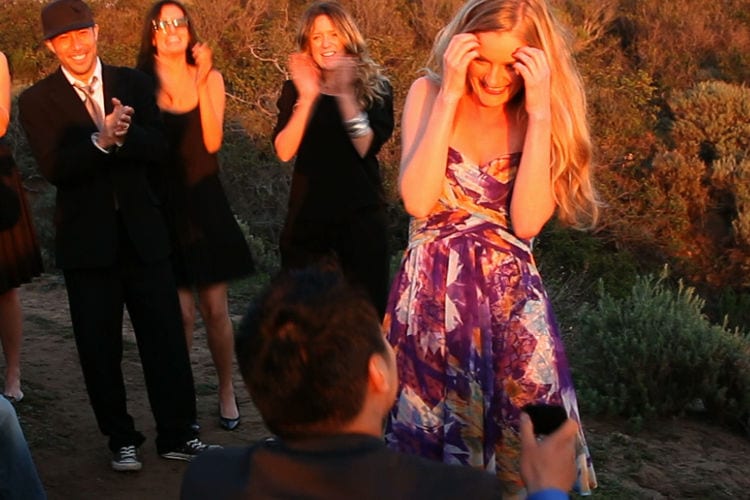 The best part? Once they returned home from their honeymoon, they finished making the film that originally brought them together—a rom-com about a divorced couple called “Starting from Scratch.” But fear not, the actors got a much happier ending than their characters and are currently going on eight years of marriage with two kids.

None, assuming you already have camera equipment and friends willing to volunteer.

Though planning a proposal of this magnitude is certainly no easy feat, it’s undoubtedly much easier (and significantly more cost effective) if both you and your partner are actors and filmmakers. If one or both of you are neither of those things, suddenly deciding you want to make a movie together might be a bit of a tip off.

Additionally, like many grand, Hollywood-style productions, the success of this proposal relies on your partner being okay with the extra attention. This might be safe to assume if he or she makes a living in front of a camera, but as with any proposal, your top priority should be to know what your partner will be comfortable with.  An audience is fine, but a cast and crew of 30+ might be overwhelming. If the attention will make them uncomfortable, scale it back a little and make it more intimate.

He Broke Character… And She Said Yes 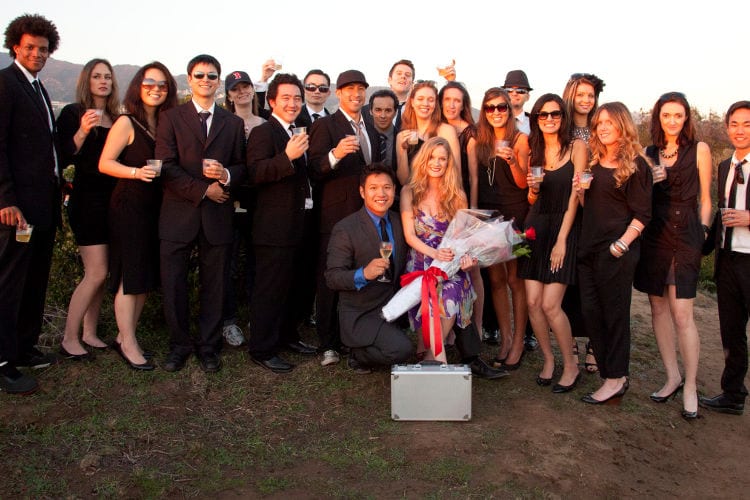 And this proposal is by no means a simple one. You’ll need plenty of time to prepare a script and get a crew together, but one of the most hilarious things about James and Elizabeth’s proposal is that, save for the ending, Elizabeth was almost completely in the loop the entire time. She helped do some of the prep work for her own proposal without knowing it. She was included in emails, knew all the details, and had the full script (with a decoy ending)—the only thing she didn’t know was that the “product” inside the case was actually a ring.

If anyone else out there has managed to include their partner in the proposal planning process while keeping the proposal a secret, we want to know about it. We applaud your creativity.

Photos and video courtesy of James Huang and Elizabeth Sandy