Joshua Ortiz, a 30-year-old filmmaker from Orlando, enlisted the help of the Detroit Symphony Orchestra to pop the question to his long-time girlfriend Valeri Santa Cruz.

Joshua considered all sorts of plans before hitting on the one he knew would most impress his 22-year-old girlfriend Valeri. He thought of flash mobs, fake movie trailers, and more, before realizing that she’d like something with music. Valeri was a composer, so Joshua came up with a plan to propose to her on the stage of the Detroit Symphony Orchestra.

How does one get to the stage of the DSO? Through persistence apparently. After many, many emails and phone calls, Joshua was able to arrange a proposal plan with the orchestra’s management and PR team.

Together they hatched the following plan: The DSO sent out a (fake) announcement advertising a networking event for young musicians. They eventually “cancelled” it, but Valeri was still able to get a tour of the Orchestra Hall. She took a friend instead of Joshua (he lied and said he had to film a wedding in Florida). In fact, he was driving to Detroit with his family.

Setting the Stage in a Public Auditorium 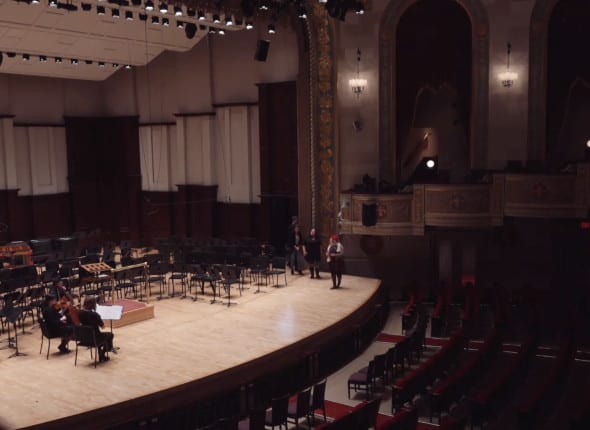 At the end of the tour, Valeri was led on to the main stage to watch a few of the musicians rehearse. Looking out from the famous stage, she was surprised to see some of her friends down among the seats.

She Recognizes Someone: “Wait, I Know You!” 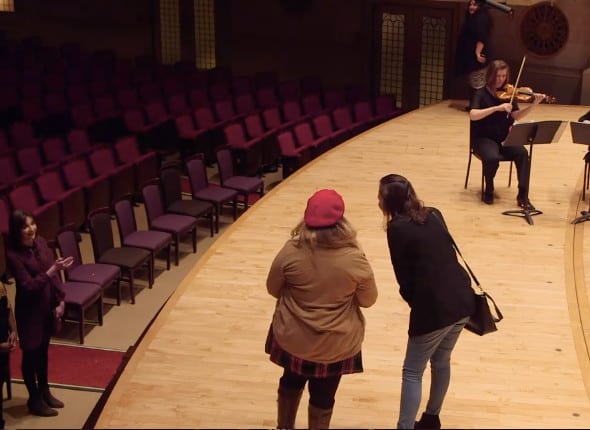 Then even more surprised when her parents and Joshua’s family suddenly appeared. Complete shock settled in when she saw Joshua himself emerging from stage left with a bouquet of flowers, and getting down on one knee.

Flowers Are Always a Good Idea 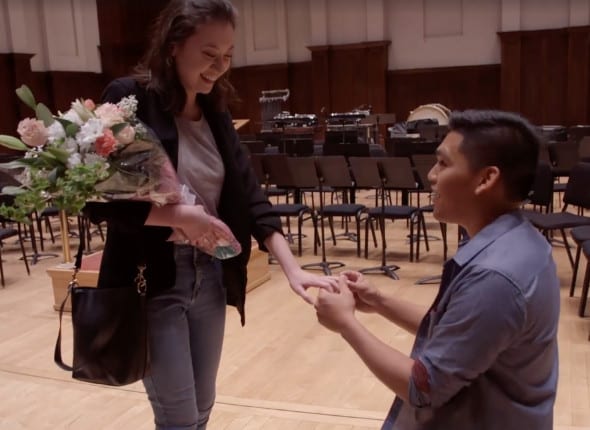 She Said Yes: Cue the Trumpets 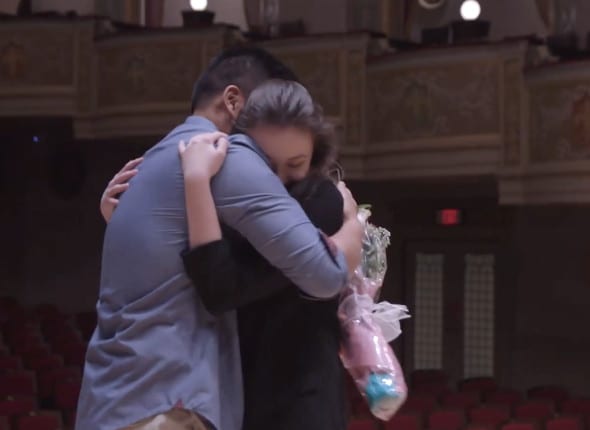 The nearest and nicest orchestral concert hall, assuming they allow this sort of thing.

Not much, assuming the hall doesn’t charge you for the privilege of using its space.

While it’s glorious to stand at the center of a huge performance space like Orchestral Hall, it won’t be the most intimate of proposals. If your intended is very shy, or if she doesn’t want even the hint of an audience, perhaps a 2,000+ seat concert hall is not your best bet. On the other hand, it’s cool, it’s awe-inspiring, and the acoustics will render her “yes” particularly resonant.