With the help of more than 60 friends and family members, Isaac Lamb was able to ask to his girlfriend, Amy Frankel, to marry him with one of the most collaborative, well-choreographed lip dub proposals of the decade.

For Isaac, a director and filmmaker, grand gestures are in his theatrical nature, and his proposal was no exception. He knew he wanted to include friends and family, so he enlisted the help of more than 60 loved ones to participate in a lip dub proposal to the hit song “Marry You” by Bruno Mars. It was fairly inevitable that this song would become a proposal anthem for the next generation of newlyweds, but even Bruno himself admitted in a tweet that he couldn’t have made a better video for this song.

On the day of the proposal, Isaac told Amy to meet him at his mother’s house. When she arrived, her brother stationed her on the edge of their Honda CRV’s open trunk with headphones playing “Marry You.” As the car began (very) slowly pulling away, friends and family members began emerging in the street for a live lip dub routine of the song while Amy watched from the trunk of the car. Over 60 people were involved, including four dancing laptops with friends on Skype who couldn’t be there in person. 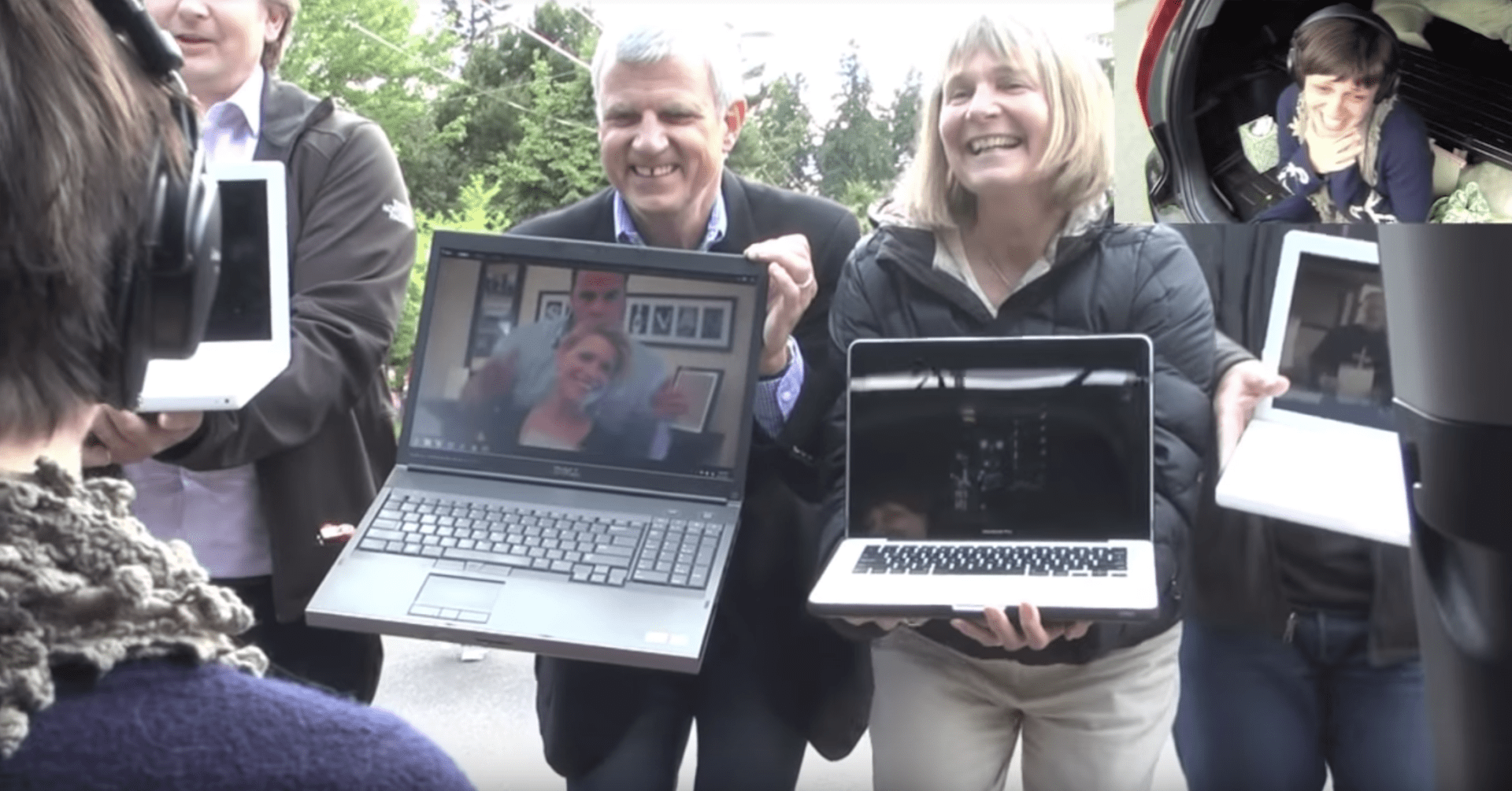 When the final chorus rolled around, the routine had escalated from two people to dozens, many costumes borrowed from productions that Isaac and Amy had previously worked on together. When the final chorus rolled around, the dancers parted like the red sea with Isaac waiting at the center. As the car came to a stop, the song was perfectly timed to come to an end just as Isaac got down on one knee. Could you have said no to that?

The Groom Appears at the Grand Finale 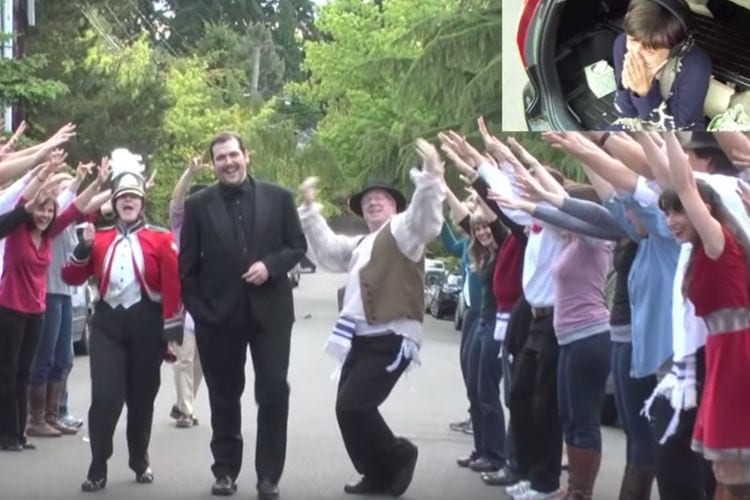 Location: Portland, Oregon (or anywhere else where weird is appreciated)

Assuming you have access to a costume department, this should only cost you the price of the ring.

Down on One Knee After the Performance 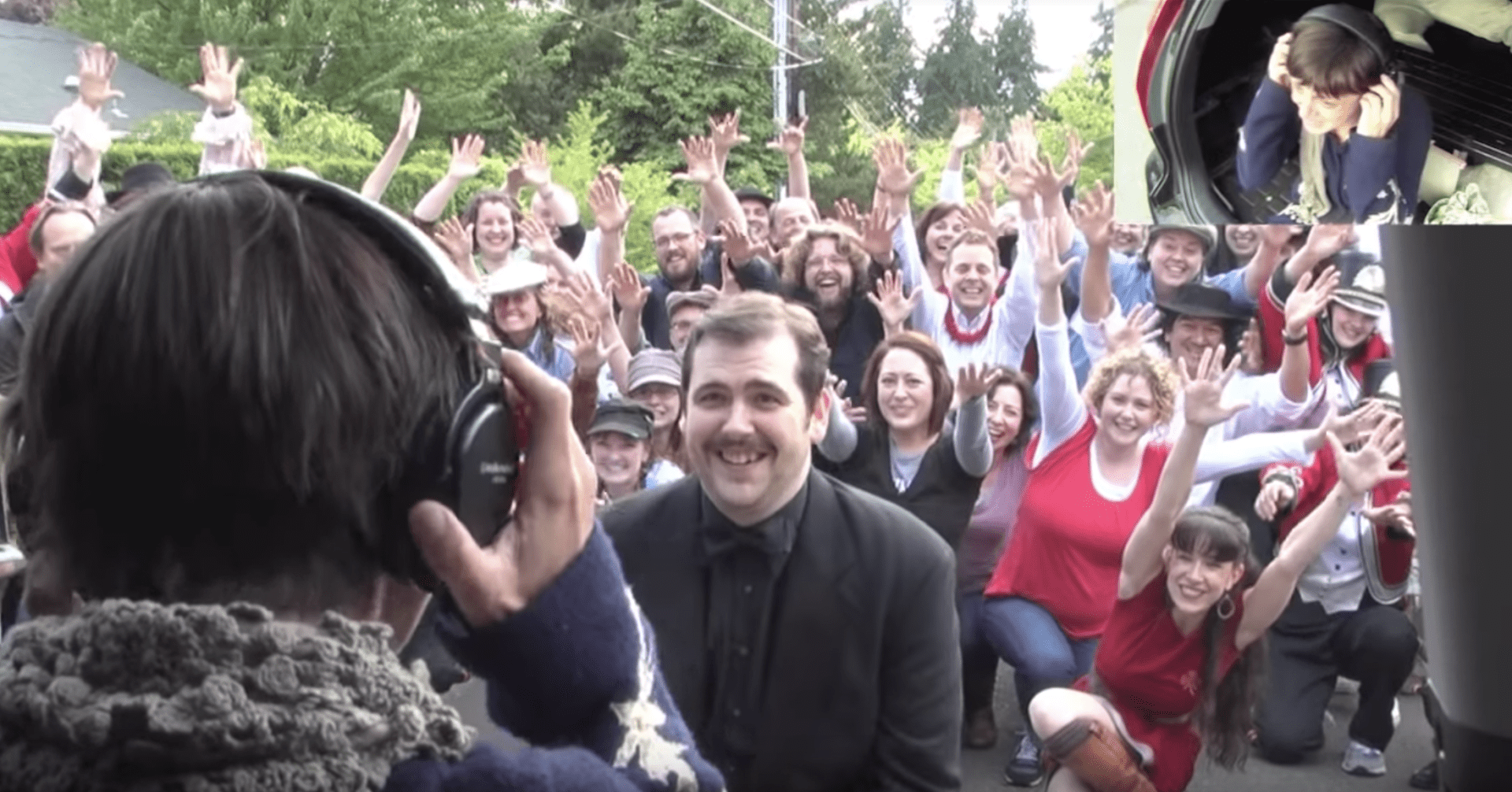 There are plenty of logistical concerns with a number this extravagant, not to mention the risk of adding a moving vehicle to the mix. Unless your closest inner circle of 60+ friends and family happen to all be professional dancers, someone will inevitably miss a step, trip and fall, forget the words, or skip town. Just roll with it. Nominate your safest driver for chauffeur duty, pick a street that will be empty for at least seven minutes, and have fun with it.

The entire routine took four hours of rehearsals, so if you’re going for something equally elaborate, factor in plenty of prep time. Isaac had been mentally blocking the routine for over six months, but made some adjustments during rehearsal by watching the routine from Amy’s point of view. Also, if your friends and family members have busy schedules, it might be a good idea to give people some notice to make sure everyone will be available.

Could You Say No If All Your Friends and Family Sang to You?

In the end, it won’t matter if everything doesn’t go completely perfectly. A million things can always go wrong, but what matters is that you get to propose surrounded by people who love you—people you love whether they have rhythm or not.

As seen on Racked. Photos and video courtesy of Isaac Lamb.