Once upon a time, Americans were really a bunch of Brits who had a bone to pick with the monarchy (something about tea). And even though our countries have since fought and made up, and then confused the hell out of each other by randomly dropping or adding the letter “u” to words like “color” and “humor,” sometimes it’s worth checking on your roots. Why wouldn’t you want to pay a visit to England’s capital?

Whether it’s the desire to launch a reverse British invasion, or just have a trip full of tea and crumpets, London can make for an adventurous honeymoon option. The contrasts leave plenty to pick from. Go urbane and eat at high-end restaurants every night. Or gulp cheese toasties and pints in pubs while listening to upcoming musicians. Grab a train to Bath, The Cotswolds, or Kent, or just walk along the Thames and a spin on the London Eye. And given that it’s the biggest city in the country (with 8.788 million residents) you won’t run out of events, sights, and opportunities to explore on your honeymoon. And don’t forget to say hi to the queen while you’re there!

The Pros & Cons of London

If Brexit brought us one piece of good news, it’s that dollar is now (slightly) stronger against the British Pound. But at a $1.42 per Pound, keep in mind the math isn’t likely on your side. If you’re looking to stretch your dollar, might we suggest taking a look here first. Thankfully, AirBNB has a strong presence in the city, along with budget hotels you’d actually want to stay in, like CitizenM. National museums like The Tate Modern are free, and—given that Britain is a nation that enjoys a stiff drink—happy hours are plentiful. (And no matter what your budget, cheap and greasy pub food really is one of the unsung wonders of the culinary world.) If you’re determined to hit the normal circuit of attractions, consider investing in the London Pass, which will allow you to mainline a crap ton of culture in a hurry.

The city boasts five airports, with regular connections by both bus and train into London and the rest of the country. Getting around is easy—within London there’s the iconic double-decker buses, the tube (Note: this is not literally a tube). Meanwhile their taxi drivers are so on their game they have to learn 320 routes through all of London’s 25,000 streets in order to get their license.

Its citizens are generally laid back, even in the face of tourists. (The saying “Keep Calm and Carry On” is very very real.) The nation’s food may be outdated, stand-up comedy fodder—but in reality, London is home to 72 Michelin-starred restaurants. (And no, not all of them belong to Gordon Ramsay.)

Since London is a large city with an endless buffet of options, you’re better off creating your own honeymoon package, so you can fine-tune your days to your exact liking. But if luxury is your bag and money is a concept for others to worry about, you can always tack on the Four Seasons honeymoon package, which includes a candle-lit dinner, sky spa, and lux picnic basket. Need a no-brainer? Travel Tringle will plan your days in both London and Edinburgh and throw in airport pickup.

Where To Stay in London 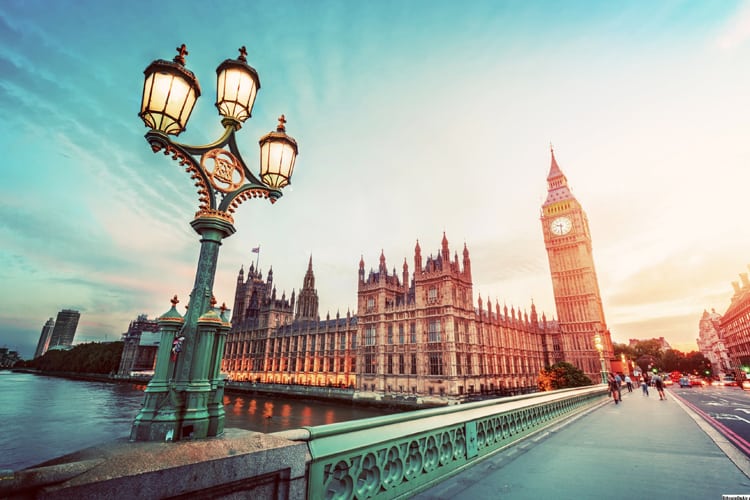 Mate! Make sure to plan this trip properly. That means knowing your neighborhoods. Notting Hill was unfortunately made popular stateside by the Julia Roberts/Hugh Grant rom-com of the same name.  Expect high-end tea options, funky flea markets, runs of brightly colored houses, and bookshops run by heartsick middle-aged British men. If that’s not quite your bag, Westminster is the photo-opt district. Famous points of interest include Big Ben, Houses of Parliament, Westminster Abbey, and every tourist ever attempting to score deals on Oxford Street and Piccadilly Circus.

Head to Shoreditch to get in touch with London’s Bohemian side. Get sugar buzzed on brownies in the Ace Hotel lobby and then go record shopping at the original Rough Trade records. Grab a curry at Brick Lane, flowers at Columbia Road Flower Market, and shop with the locals at Boxpark and Old Spitalfields Market. Soho is the premiere art district, if theater is your art of choice. Stop by the half-price ticket booth in Leicester Square. If you’re looking for one of the more laid back neighborhoods of London then look no further than Kensington. Park spaces and pubs and galleries, galore!

Best Attractions and Activities in London 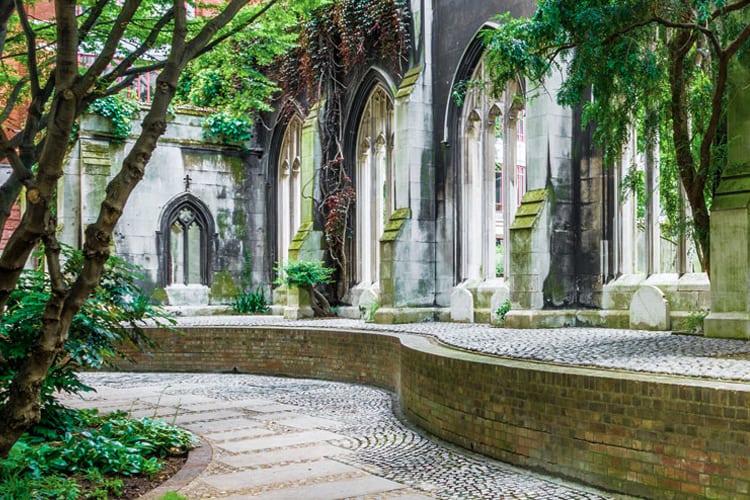 We don’t need to tell you that the standard loop of London activities is worth checking out. But after you’ve cruised the Thames, seen Hamilton on the West End, and done the obligatory royal spotting (or just watched the changing of the guards), here’s a few other things to add to your British bucketlist.

Built during the Saxton era, the tiny church of St. Dunstan-in-the-East was bombed during World War II, and its ruins were reclaimed by nature. Since then the former house of worship’s gardens have been curated a bit more, and often wins awards for its beautiful blooms. Grab a sandwich and head to the financial district refuge for a low-key picnic. During the weekdays, there’s usually a few suits grabbing a break, but during the weekends it’ll be all yours.

Looking for a more ambitious picnic experience? Grab a train to Kew Garden Botanical Gardens, where you can spend the whole day exploring its 300 acres of flora and fauna. The land is often host to installation art pieces like The Hive, a two-story wire structure where lights and sounds a triggered by bee activity (and if Instagram is any indication—social media likes.) Bonus: they’re super into the whole BYOB thing, so grab some food and don’t scrimp on the rosé.

Done the Tate Modern and National Portrait Gallery but not gotten your art fill? For some seriously modern art, try God’s Own Junkyard. During the weekends you can wander through the oversized warehouse featuring an eye-watering number of neon signs, culled from around the world. And because it’s London, there’s also a café in the back with additional signs and plenty of tea. 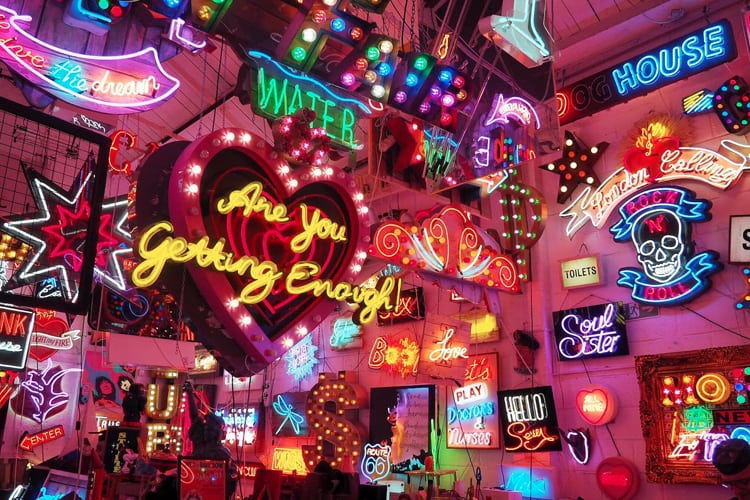 As we established earlier, London can be a pricey ride. But it is your honeymoon, and if you want a massage after the madness, who’s stopping you? Save a few Pounds without sacrificing much by hitting up Russian Spa Club Banya No 1. Come for a steam, stay for a scrub, and then finish with a round of borsch and brown bread.

Love partying but hate sleeping until noon? Perhaps going to a Morning Rave is for you. (No judgments from the night owls.) Since 2013, Morning Gloryville has been throwing ragers between the hours of 6:30 to 10:30am. No alcohol, just juice bars, coffee options, free massages, and the occasional celebrity DJ helping you dance your way into your day. You packed your glow sticks, right? 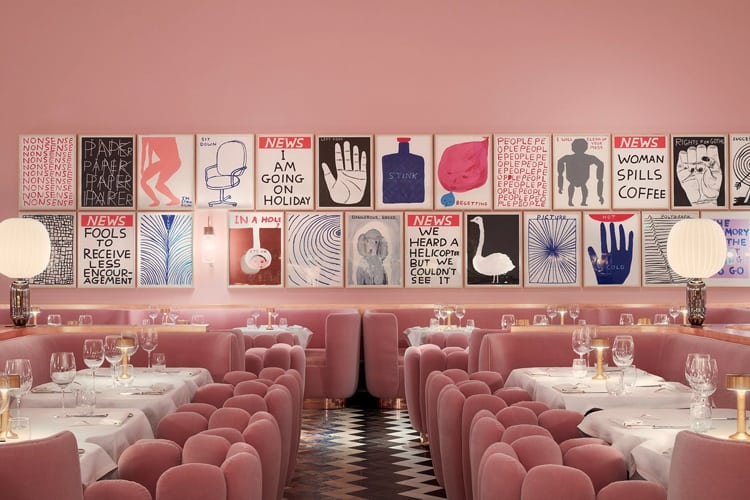 All you can eat brunch at Gaucho: Yes, all you can eat. Bottomless bloodies. Rivers of mimosas…and, oh yeah—food too. There’s a two-hour time limit, so come hungry, and prepared to chew like a champ.

Designed by satirical scribble artist David Shrigley, Sketch is a traditional British tea situation for people who don’t really get down with more fro-fro options. Yes, you can find tiny cakes and Earl Gray enough to bathe in. (It’s good for the skin, or so we’ve heard). But there’s also a full menu of lunch options, including fish, pasta, and duck.

Circus is part cocktail bar and part cabaret with a pan-Asian menu. Sip on a cocktail named for circus performer, nibble on some vegan-friendly sushi (or the real stuff if you’re so inclined) and marvel at performers twisting their bodies in ways that would take leave you claiming medical disability.

India is no longer a British colony but the cuisine’s hold on London is still strong. There’s plenty of hole in the wall joints worth visiting, but for the lux treatment, check out

Veeraswamy. Located on London’s West End, the 90-year-old, Michelin-starred restaurant has a deep bench of curries and traditional offerings from across India, in addition to what many consider to be the best chai in the city.