When making a Best Man toast, you don’t have to be Shakespeare. You just need to have a plan, execute it, get in, get out. Think of it like invading a small country: Don’t wing it, don’t overstay your welcome, and don’t piss off the locals. Yes, confidence and delivery matter. (More on that here.) But the most important element? The plan itself. You need to have the toast written out, and that starts with a template. Like this one.

No need to over-think it. If you stick to those 4 components, you’ll be fine.

How long should it be? Anywhere from 45 seconds to 5 minutes.

If it’s less than 45 seconds it looks like you didn’t give it any damn thought. If it’s longer than 5 minutes, then no matter how charming or brilliant you are, you’ll lose your audience. Besides, this is not the moment to try to impress everyone in the room with your accomplishments and brilliance.

A note on mechanics of the speech itself. You should have it mostly memorized, but also print it out and have it in front of you. Go one step further and print out a copy in

Make lots of little paragraphs. Chunk it up. That way, if you lose your place when looking up at the crowd—which you should be doing, frequently—you can quickly find it again. Also, double-space the son of a bitch.

Okay, onto the content itself. We’ll walk through each section, blow by blow. The good news: two of them are super-easy.  The intro and conclusions are paint-by-numbers; you just need a couple of warm-and-fuzzy gems. 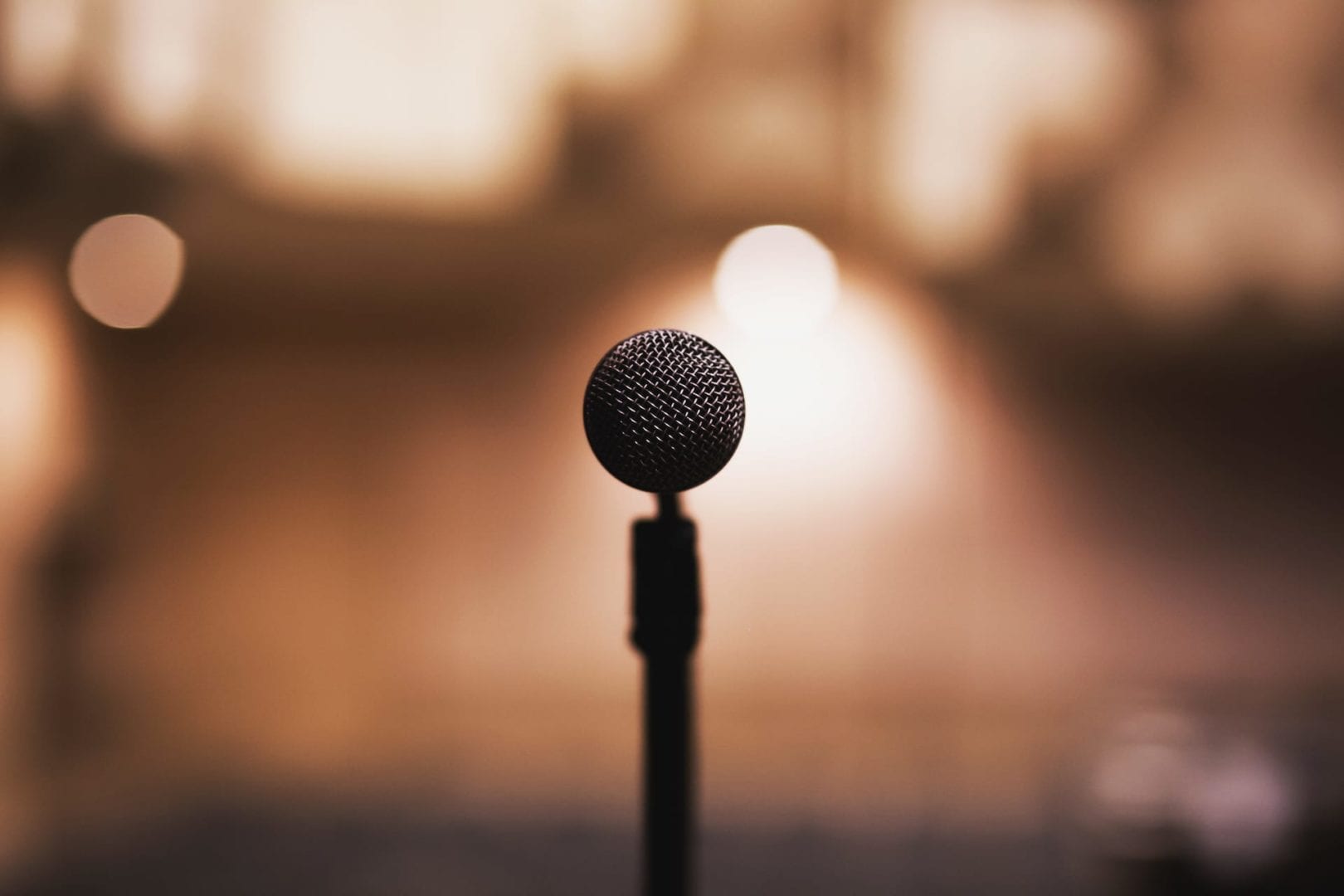 If you’re feeling gutsy, and if you trust your instincts and public speaking chops, you can have a tiny moment at the beginning where you humorously comment on something that just happened that night. This adds flavor and spontaneity, but it needs to be quick and in good taste. This part’s optional.

When you start, don’t assume people know who you are. Many have no clue. But avoid opening with the lame, “For those of you who don’t know me, I’m …..” Everyone else speaking will say the same exact thing, so try and separate yourself from the herd. Instead, start your speech with how you met the groom. It should be both factual and funny. Start with the fact, then pivot into the joke. Like this:

“I met Jason when we shared a cell together in Folsom prison.” That’s the fact. Then you pivot into… “Back then, his ‘girlfriends’ were named Frank and Bill and they made him pick up the soap, if you know what I mean…”

Okay, that was just to make  sure you’re paying attention. Obviously, the above violates two rules that you should have learned from this article: 1) No humor that will upset Grandma; and 2) no mentions of ex-girlfriends, not ever, under any circumstances.

Still, that example should give you the idea. Just start with “I met (groom’s name) (here),” pause, then you give a kicker.

“I met Charlie when we were roommates at Florida State.” Fact, then pivot into a quick little anecdote that you later leverage… ” In college, he was the worst cook I’d ever seen, maybe that the world has ever seen. When he made pasta, he used ketchup as sauce. Not kidding. Ketchup.”

Not laugh-out-loud funny, obviously, but mildly amusing and the trick is to later use this in reference to the bride. (You’ll see.) 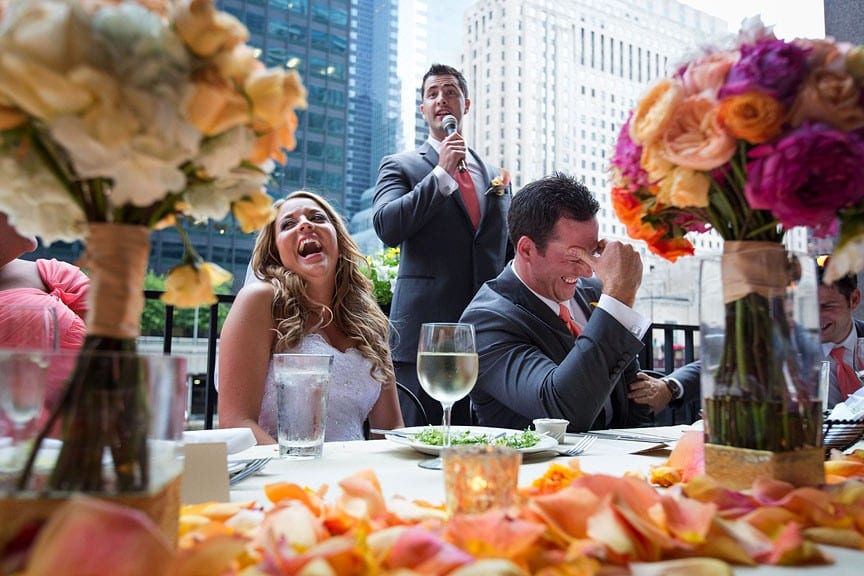 2) Funny (But Not Snarky) Stories About the Groom

These should be funny, but not mean-spirited. It’s not a roast, and you’re not trying to bust the guy’s balls. Technically, we already entered this section in the above example (Charlie’s bad cooking)–a good speech will segue right in.

Try and give between 2 and 4 little anecdotes.  These anecdotes should all meet the following criteria:

– They poke fun of “non-important stuff,” but they shouldn’t mock his career or fundamental life choices

– They aren’t too esoteric. For instance, you shouldn’t tell a “funny story” about how in Advanced Chemical Engineering, Charlie kept confusing the Hydrogen molecules with Hydrocarbon molecules. HA!!

– They don’t introduce any new characters by name. There should only be two characters in the toast: the bride and the groom. There’s nothing worse in a story than when someone bogs the sucker down with, “So, first off, you should understand that Charlie had two bosses-Brandon and Tony. Although, technically, Brandon reported to Tony, but that was really more a formality. Anyway, the big big BIG boss was Susan, and she [YAAAAAWWWWWWWWN.] No names besides the groom and the bride. Keep it simple.

You get the idea. Quick little anecdotes. This is the great secret, the key to a funny toast: you don’t have to actually be funny yourself…you just need to relay a few mildly funny stories. That’s it.

So your first task in writing this toast,  is to start with a blank sheet of paper and scribble down as many funny memories as possible. Start with a list of 10-15, then narrow it down to 3 or 4. Don’t worry about writing them funny, just write them straight, and the humor will play itself out. And if you can’t think of anything funny about the groom? Embellish and exaggerate.

That’s enough to get you off to a solid start. For extra-credit?  Here’s the advanced move: each of your stories subtly hints at a gap in the groom’s character–not a defect, mind you, but a gap–that’s magically filled by the bride. Which gets us to the next section: 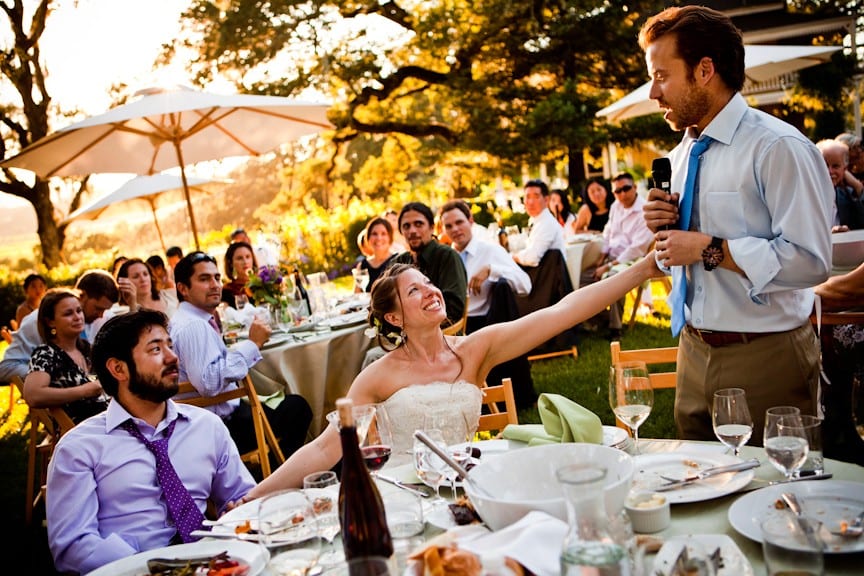 3) Glowing Words About the Bride

99% of the time, this is the toughest section. You’ve known the groom for years, probably, and the bride’s a relative stranger.  If you have glowing stories about her—and, ideally, about the happy couple together—great. Use them. If you’re worried they’re too sappy? They’re not. This is where the women in the audience bust out the hankies.

You’re the best man, you’ve known this dude for years and years, and now, ultimately, you’re giving them your blessing. Bring out the big guns and talk about how wonderful she is. If you have to, lie.

If you don’t know a damn thing about the bride, this is where you leverage Section 2 and actually show, without using these God-awful words, how the bride “completes him.”  Ahhhhhhwww.

Remember Charlie and the ketchup?  In this section, you link back to that with something like this:  “And then, about a year ago, I knew that Charlie was serious. He went grocery shopping for ingredients he had never seen before–cilantro, artichoke hearts, risotto–you name it. And he cooked. A real meal. Without ketchup. He spent five hours cooking, and I knew this man was in love.”

Another thing you’ll want to do is rattle off some of the bride’s amazing qualities. Even if they’re not stories, per se, a quick rat-tat-tat of brilliant qualities can do the trick. Go beyond looks. It can be nice and simple and factual, but you want to convey that she’s more than some hot chick, she’s a fascinating woman your buddy’s luck to have.

And here’s a funny and fool-proof way to segue into this little rundown: “After Charlie introduced me to Jennifer, I told him four words, and I kept repeating these four words every time I saw him. The four words: Don’t. Mess. This. Up.” (Chuckle from crowd.) “Not only is Jennifer beautiful, but she–” (This is where you rattle off the amazing qualities.)

If worst comes to absolute worst, hell, you can just say, “Not only is Jennifer beautiful, but she’s intelligent, funny, great at ___(something trivial like darts or karaoke or croquet or whatever)__and her only flaw, it seems, is questionable taste in men.”

Something along the lines of:

“Charlie…Jennifer…” (Raise glass, pause) “To a lifetime of love and happiness.”

Or if you’re feeling bolder and more sentimental:

“Charlie…Jennifer…” (Raise glass, pause) “To a lifetime of joy, love, and fulfillment.”

Of course, there are a million ways to close, but that’s a surefire line that’s simple and gets the job done. Whatever you do, make sure that it’s forceful and upbeat, feel-good and crisp.

And before you actually give the speech, make you sure check out our Dos and Don’ts of delivery.