For more than a decade, any discussion of New York City’s best restaurants has included at least a reference to Mario Carbone. Maybe it was when the chef-owner first co-opened Torrisi Italian Specialties in Nolita with partner Rich Torrisi in 2009. Or perhaps it was the launch of Parm in 2011. Or Carbone in 2013. The venues kept coming: ZZ’s Clam Bar, Dirty French, Sadelle’s, Santina (near the new Whitney), and most impressively, the reimagined Four Seasons Restaurant in the historic Seagram Building, which is now four spaces: The Grill, The Pool, The Pool Lounge and The Lobster Club.

Truth be told, you were probably eating Carbone cuisine even earlier; he honed his chops working with Mario Batali, Daniel Boulud, Wylie Dufresne and Mark Ladner—long before he founded Major Food Group. And now it’s hard to keep track of just how many Michelin and New York Times stars his empire represents. Through it all, he’s managed to attend and even cater weddings. We talked to Carbone about what kinds of food and drink to serve at a formal function. Here are his dos and don’ts—including that time he organized a “tower of cannolis.”

What is your experience with weddings and catering?
I’ve helped organize close friends. I’ve been a best man. I’ve been a caterer. I’ve seen it from almost every angle, but not as an actual groom. And I recently helped organize my best friend’s wedding. I let a caterer do the main meal, but provided midnight food for all the drunk dancers that just came out during the dance-floor hour.

Do you have advice for couples thinking about wedding food, catering and venues?
All too often when a couple is working with the caterer or when they’re thinking about their event and making choices of locations and food and aesthetics, they often consider the guests way too much. They lose sight of the fact that the guests are there for them. When you go to a wedding, you’re there to celebrate them, you [should] leave with a better feeling and understanding of who they were, their likes, their dislikes, maybe their heritage, their favorite things. I think it’s important you get a better understanding of the two people that just got married through their event and not like, ‘Oh we have to have a tuna appetizer.’ I’m like, why? Does one of you really like tuna?

I don’t care how many people are in your party, spaghetti’s out!

How do you cater a wedding with people from two very different food-centric backgrounds?
My best friend is Greek and his wife was Indian and I was like, “OK let’s work through this.” How do we express two very strong cultures in this wedding so that people get a better understanding of it? There should be a theme. There should be a reason. You know, guests should walk away understanding what they were just at and why they had what they had. All too often the couple’s  just like, “Oh, we should have a fillet entree.” Why? You’re just going through the motions right now.

Did that couple serve both Greek and Indian dishes or did you come up with fusion dishes that somehow blended both cuisines?
Because it was an Indian wedding, it took place over four days. There were Indian nights, they were traditional Greek nights. And then at the actual event, the dinner was a 50/50 buffet of Greek and Indian food. And then I came out at midnight with Carbone foods. 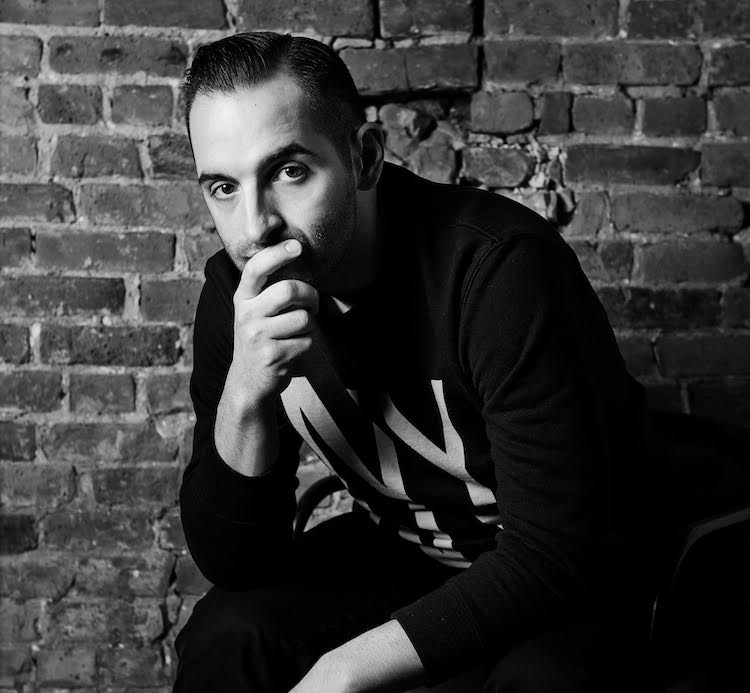 Are there any foods or ingredients that you would NOT recommend?
Absolutely. Once you’ve narrowed down what you’re serving, I think the next most important thing is trying to serve at optimum temperature. Can we really serve it hot for however many guests we have?

Spaghetti for example: there’s just no conceivable way of serving it to everybody [where it’s fresh]. It’s just physically impossible. I say this as someone with experience; I don’t care how many people are in your party, spaghetti’s out! When you choose spaghetti, what you don’t even realize is that this caterer is now going to dump 50 pounds of spaghetti in a pot of water three hours before your wedding and pour cold water on it and try to make it into something somewhat tasteful during the time of your wedding. That’s what you just said yes to.

What are your personal go-to dishes for events?
Stylistically, as an Italian American and thinking of the table as being the moment of bringing family together and always being convivial, I lean towards more sharing, family-style platters of food over individual plated food. But, if you’re looking for a super-refined meal of very high elegance, then you’re probably going to vote against that.

In a wedding environment, you can’t beat family style for getting food out in batches at the right temperature fast. And then there’s the convivial aspect of, ‘Hey, pass me the pepper’ and your waiters can help you with that. That’s the best way to serve a lot of people really fast delicious food.

If you’ve ever been to a really fancy three Michelin Star restaurant where they touch the shit out of the food and manipulate it to some level of perfection, it’s impossible for it to be the really cold or really hot. You just get room temperature because of how long they are working on it.

How about what to drink?
I think batch cocktails are great. You can have fun naming them, but it also offers speed; you can just pump them out and get everyone boozed really fast.

And then, you may want to do a Champagne toast. I prefer the Gatsby coupes over flutes. I just think they put smiles on people’s faces. You don’t see that much anymore.

For me, white wine should be very simple, clean, crisp, and ice cold–to the point where I put ice in mine. So I want a Vermentino, I want a Pinot Grigio, I want Arneis. I want ice cold, very clean, southern Italian white wine. And generally I’m eating, you know, higher acidity, seafood salad and baked clams and cheeses. That’s the quintessential first course of an Italian-American meal.

Moving on to a heartier thing, you’re going to make a lot of people happy by keeping red wine (if you’re doing an Italian theme) to a grape and a brand that people know and recognize. Within the whole world of  Barolo or Barbaresco, you can find a huge range of price points; give them something a little fuller-bodied red. Avoid anything austere unless there’s some reason why you want to serve it.

One of the things I did for my best friend’s wedding is serve a bottle from the person’s birth year. I was able to get a bottle of 1979 Jack Daniels and I pulled all the groomsmen into a room and we did a toast to his birth year. You could do the birth year with a bottle of wine. Or Sherry or Port, maybe something after dinner. Always tie it to the two people getting married or one of them. 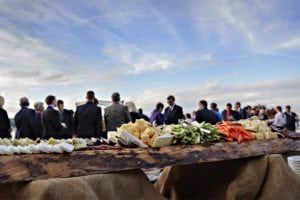 How Much Does Wedding Catering Cost?

When you’re hired as a caterer, are you responsible for dessert?
It’s 50-50. Sometimes, especially with wedding cakes, people have a particular cake-maker in mind. We in the company have one of the best, if not the best, pastry chefs in America: Stephanie Prida.

I think that’s one of the few moments that people do actually remember themselves; what is my favorite flavor of cake?

My best friend was like, ‘I don’t really want a traditional wedding cake.’ So I asked: What do you want to serve? We wound up serving giant coolers of ice-cream sandwiches and like King Cone pops. Oh, and he wanted carrot cakes from Carbone. So we made a sheet cake of carrot cake, but there was no cutting of the cake ceremony. But, you know, everybody’s different. I just had my birthday last month and I had a tower of 100 cannolis. It can be anything you want.

These 50 cocktails represent the most popular, delicious, and easy drinks to make for weddings and many require only two or three ingredients.

Just Desserts: How To Pick Your Wedding Cake

Everything You Need To Know: Food And Drink At The Engagement Party

Whether you go with a fancy fete or a casual barbeque in the backyard, having your food and booze on point is a must for the first event of your wedding adventure.

You and your friends together in a group setting should add up to the most casual version of lifestyle organizing one can imagine.

Everything You Need To Know: Food And Drink For The Proposal

What do all celebrations need? Well, food and drinks, of course.

The Food and Drink You Need At Your Wedding

These celebrations have one very important thing in common: they all require food and drinks.