Start Your Registry With A Checklist

Building a Registry With Your Bride (Without Tears, Blood or A Broken Jaw)

A Guide To Thank You Notes

Asking For Money With A Cash Registry

Building a Registry With Your Bride (Without Tears, Blood or A Broken Jaw)

Next to planning your honeymoon, building a registry should be one of the least stressful parts of your wedding planning. After all, you’re constructing a wish list of cool new toys to play with: what could go wrong?

For a start, a registry involves money. Other people’s money, it’s true, but money nonetheless. Money can be one of a relationship’s most fraught topics, especially at this stage. There’s no better way to learn about your partner’s financial personality than by planning a registry. Is your bride stingy? Is she Kardashian-level indulgent? You’re about to find out.

Also, there’s the problem of “the tyranny of choice.” Humans don’t want limitless options. Too much opportunity makes us anxious and stressed out. Think of how exhausting it can be to choose a movie on Netflix. The two of you spend an hour finding the right film, then she falls asleep half an hour in.

Registry shopping can have a similar effect. Spend a couple of days deciding which cappuccino maker to go for, or which shade of bath towel best captures your unique chemistry as a couple, and the two of you may end up hating each other.

But you do have to do this together. Here are some tips on how to build your registry without emotional scarring, physical injury and plates smashed against the dining room wall. 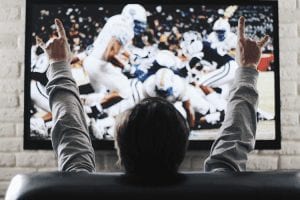 DO IT IN YOUR UNDERWEAR

You don’t have to drag yourself to a shopping mall and deal with pushy salespeople. You’ve heard about the Internet, right?

You can spend an hour a day just hanging out with your girl on the couch, looking at china patterns online and talking about what kind of home you each envision. The comfortable surroundings will extend your tolerance for such work, and if you start to get hangry, the refrigerator is ten feet away.

If you’re a real power player, you might even be able to use registry shopping as a form of foreplay. Butter her up with your attentive consideration of window shams, then smoothly transition into some couch-based nookie. That’s not something you can do at Macy’s (well, you could, but you might have to buy the couch afterwards).

DO IT WITH A LASER

On the other hand, if you can get your mind out of the gutter, there is something to be said for registry building the old fashioned way, in a bricks-and-mortar establishment.

The typical scenario involves walking around a department store with a scanner, reading the barcodes of everything that catches your eye and automatically adding them to your list. There are disadvantages (crowds, sales people) but you do get to fire at things with what is essentially a laser gun. 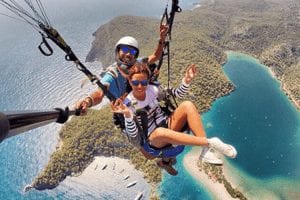 One of the most enjoyable things about working together on the registry is that it allows you both to indulge your passions and show off your expertise.

Are you a foodie, for instance? Now’s your chance to take control of the kitchenware selection, and mansplain the difference between an All-Clad pasta pot and a Le Creuset Dutch oven.

Are you handy around the house? Now’s your chance to get that deluxe Dremel tool you’ve had your eye on, or the $300 low torque electric screwdriver.

An important caveat, though. You need to extend to her the same courtesy and attention when she starts to opine on her areas of expertise. Maybe it’s Waterford crystal and towel sets, or maybe she’s the one who knows about the power tools. The point is, you have to take an interest in her stuff (and visa versa) if this thing is going to work.

If you treat your registry like a collaboration, and not a competitive, consumerist land grab, you’ll get through it without injury (emotional or otherwise).

The Best Wedding Registries for Every Type of Couple

Staying up to date in this technological world can be challening. A wedding registry focused on consumer electronics might be the best option for you.

The 3 Best Wedding Registries For Cash

Receiving wedding gifts is always an exciting part of the entire ceremony. But sometimes getting cash from family and friends is the more practical option.

The 5 Best Registries For Kitchenware

Every couple has a silver thread that ties them together....

How to Get Cash, Not Vases.

In virtually every gift-giving scenario, we are conditioned to give something personal, something creative, something they'll cherish. Yet something is different this time: the wedding registry.

Why You Should Use A Lingerie Registry

A good strategy will help make the registry an efficient, stress-free undertaking.