Arrive at Philadelphia International Airport (or if you’re arriving by Amtrak, the historic 30th Street Station), and take an Uber to Hotel Palomar Philadelphia. A stylish, hip hotel that’s part of the Kimpton chain, Hotel Palomar is near Rittenhouse Square in a building that dates back to 1929. It flaunts true Deco style, with funky, Americana-themed artwork, a buzzing restaurant and many suites with great views of the city skyline.phia Art Museum and Eastern State Penitentiary 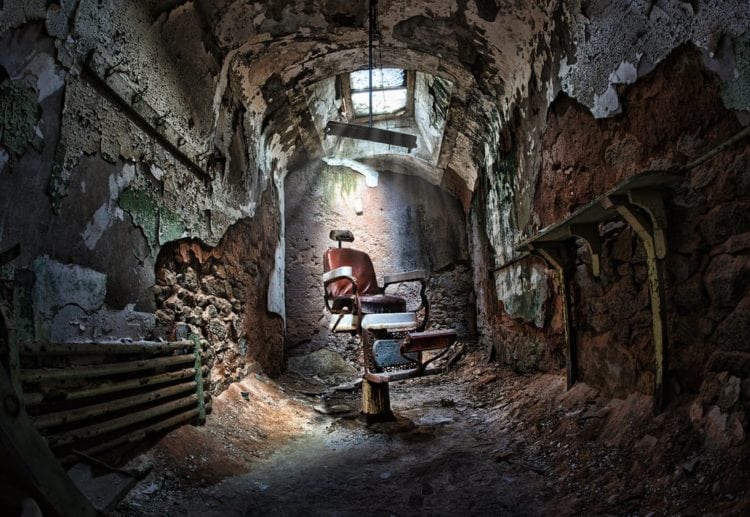 If there’s a city where the museums don’t suck, it’s Philly. One of the largest museums in the country, the Philadelphia Art Museum is iconic and full of national treasures and permanent international artwork. It could take days to explore it (although admission tickets are good for two days, which helps). You’ll see everything from Picasso to Dali here, but even if you don’t make it inside, you can at least recreate your favorite Rocky moment by running up those iconic steps. While you’re in the area, walk several blocks to the Eastern State Penitentiary, a historic, 1829 prison that led the way to reform in the judicial system. No, seriously. This prison basically changed the way we get locked up because it was notoriously hell-level bad for its prisoners. It’s still spooky as hell but don’t chicken out. Otherwise, how will you ever see Al Capone’s cell?

Get your history fix at Independence National Historic Park, home to Independence Hall, where the Declaration of Independence was signed. While you’re on your American history culture crawl, stop off at the Benjamin Franklin Museum, The Liberty Bell Center (home to the Liberty Bell, unsurprisingly enough), and the National Constitution Center, all within a quick stroll of each other.

Stephen Starr is Philadelphia’s most famous chef, and you may have already dined in one of his restaurants across the country (like Buddakan and Morimoto). Book a table at Barclay Prime, his upscale steakhouse inside the historic Barclay Building in Rittenhouse Square. It’s the perfect setting to toast the groom. The steaks here aren’t cheap (they go up to $195) but the best steaks in the state are worth the splurge.

Most people who start their night at McGillin’s Olde Ale House typically end their night at McGillin’s Olde Ale House, the oldest pub in the city that still feels, well… really old. It opened in 1860, the year Lincoln was elected president, to give you an idea of how old we’re talking. Now a huge tourist attraction, it’s still riotous fun with 30 beers on tap, and it’s basically in the hall of fame of famous beer bars.

9 am Breakfast/coffee at Rival Bros

Start your day early with a caffeine fix at Rival Bros, a former mobile coffee truck that finally got a permanent location in Fitler Square. They serve up house-roasted custom blends drip-style, as well as espressos. While you’re here, grab the Nutella toast with shaved coconut and dried strawberries, which is basically addictive.

Yes, Mutter is another museum, and yes, you’re going early before the crowds come. Don’t question it. You’ll thank us later. Mutter Museum is basically the most NSFW museum out there, housing a collection of really creepy, unusual and fascinating medical oddities inside a 19th-century building. Expect about 20,000 preserved body parts in jars, the tallest skeleton in the US, and actual tumors removed from bodies. It might make you a bit squeamish but it’s awesome and a nice break from paintings of lavender fields or whatever those other museums have.

There’s so many great cheesesteaks in a city known for cheesesteaks, so we’re sending you to the top three to get your fix. The no-frills, counter-style Sonny’s Famous Steaks are known for having the best in town (also voted number one by GQ). It’s all about juicy beef in soft rolls with gobs of provolone and Cheez Wiz.

Expect John’s Roast Pork to be packed. Not only does this famed retro spot close at 7 pm (meaning those who want to try their famous cheesesteaks don’t really have a dinner option), it’s also not huge. What’s huge are the cheesesteaks (and, of course, the roast pork, if you decide to go that route). Have your cheesesteak outside on the picnic tables.

Philip’s is an off-the-beaten-path, pedestrian drive-thru in South Philly. You order your cheesesteak at this retro spot by walking up to the counter window to order cheesesteaks that are a little messy with hot meat, onions and cheese. Because it’s not on the menu, ask for the original, old-fashioned cheesesteak, which comes with grilled tomatoes, fried onions, provolone, and sweet peppers. It’s a monster sandwich.

Not the type of garden you would expect, Magic Gardens is a whimsical, artsy attraction by local mosaic mural artist Isaiah Zagar. It’s got larger-than-life art in the form of a “garden” made completely out of tiles, found objects (like bicycle wheels), statues, recycled stuff, mirror mosaics, bottle walls, sculptures, and other outdoor art installations that spans half a block. It’s one of the coolest things you’ll find in Philly. 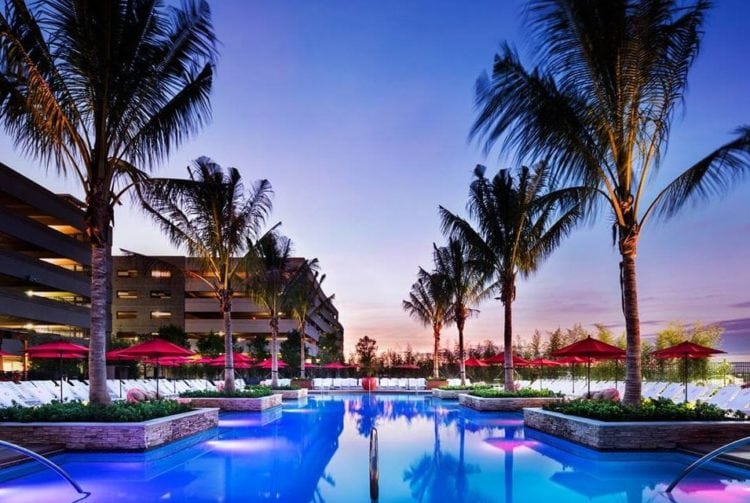 Most bachelor party groups spend a wild night out in Atlantic City, only an hour drive from Philly. Book with Secrets Limo Service and pre-game in a stretch limo with some booze picked up from Fine Wine & Good Spirits, the state-run liquor store. Atlantic City is party central with casinos, celebrity-chef restaurants and nightclubs. Go straight to Borgata Hotel Casino & Spa, where you’ll start off chilling out at the pools (there’s an indoor and outdoor option), play roulette on the casino floor, have dinner at Angeline by Iron Chef Michael Symon, and then party down at Premier Nightclub.

3 am Pat’s King of Steaks 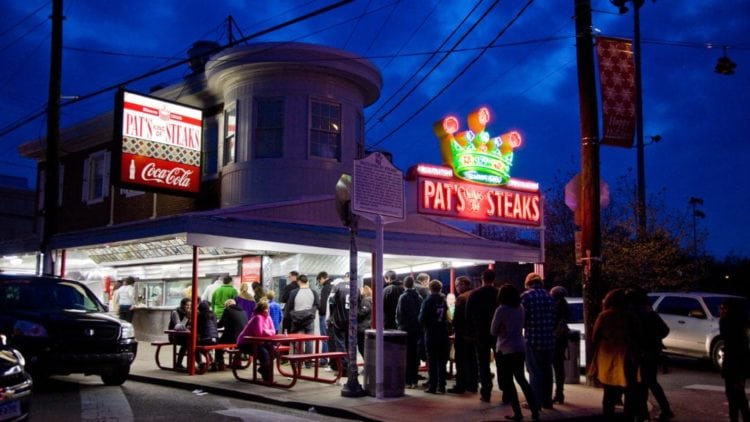 An underground food hall and market (underneath the 19th-century Reading Railroad), Reading Terminal Market is the best place to sample food from all over the world, whether Mexican, Greek, Thai, Indian, or plenty of other cuisines. Most of the food stalls have their own seating area, so pick a spot and chow down.

Celebrate the groom-to-be with a fancy cigar at Ashton Cigar Bar, a swanky little lounge right above a long-standing cigar shop. There are more than 200 premium cigars to choose from, and a whopping, 385 whiskeys, making Ashton’s the best spot for—wait for it—whiskey and cigars! 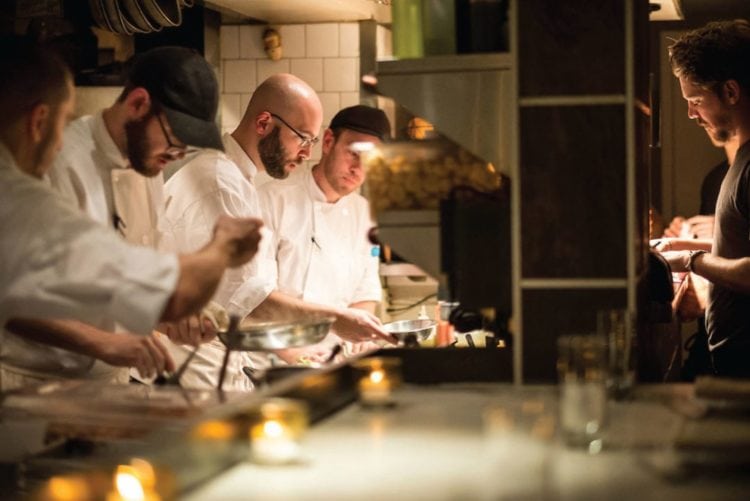 Hailed as the best restaurant in Philly (and praised by the New York Times), the two-level Vernick in Rittenhouse serves up New American cuisine in an ultramodern space. The restaurant has won awards and received accolades from every top critic (James Beard Foundation, Zagat, Bon Appetit), so you know you’re in for a culinary treat. Order anything that’s roasted in their wood-fire oven, like the organic Amish chicken or the whole fish.

Eraserhood is a cool area (located on the east side of Broad Street along Spring Garden) that inspired former resident David Lynch on his cuckoo filmmaking. It’s very industrial, with underground venues (particularly bars) and huge wall murals, which takes hipster to a whole other level.

Trestle Inn is a crazy dive bar that sort of feels like what Coyote Ugly did twenty years ago. It’s boisterous and fun with go-go dancers shaking it on the actual bar while waitresses serve up retro-inspired cocktails, live DJs take to the decks, and video projections add to the hip ambience. Did we mention go-go dancers? A bar with actual go-go dancers that’s not in a club setting? Trestle Inn is just about the only thing keeping some of the locals going, so have a blast.

1 am Finish the night at Day Dreams Strip Club

Daydreams turn into reality at, well… Day Dreams. This gentlemen’s club is consistently voted as the best in the city, not to mention it has the hottest girls to boot. It’s totally chilled out, and it’s also BYOB, which means you can save all your large bills for the ladies (and yes, feel free to wheel in your own keg… it’s done all the time). They have this thing called “dream seat” where you pay $40 to have your groom taken on stage, handcuffed to a pole while a “dream girl” does her number on him and a photo is taken as a souvenir. So, keep that in mind for the groom (or yourself). Do the whole night right with a VIP party room, which comes with its very own stage and DJ. It’s only $150 per hour, no matter how many horny dudes are in your bachelor party, so pony up for the best night of your life!