Hear it first from the city that doesn’t give a damn whether you come or not, Boston is the spot for your final engager-rager. The deep-rooted passion for sports and beer makes the perfect backdrop for your squad’s bachelor party goals. Just leave your not-as-original-as-you-think-it-is, fake Boston accent at home.

A few words to the wise before you book your flights to Beantown—neither the locals nor the weather will care or cooperate with your plans, and we highly advise staying away from the 7th-grade-field-trip spots (re: Freedom Trail) at the height of tourist season (summer). But with those things in mind, you’ll be set for a great time filled with all the sports, booze, and best party spots New England has to offer. Boston can come with a higher price tag than many cities, but we’ve built a baller itinerary with the best ways to navigate the city without breaking the bank. And if this isn’t enough help, there’s always our trusty Bachelor Party Planning Spreadsheet.

Located in Boston’s Back Bay, The Marriott Copley Place is by far the best deal you’ll find in any area that gives you access to the things you’ll actually want to do (without spending all your cash and time in an Uber). Also, it has great views, is attached to a decent sports bar, and has generously-sized bathrooms in case you and your entourage all decide not to hold on to your liquor at the same time. Hey, it happens. 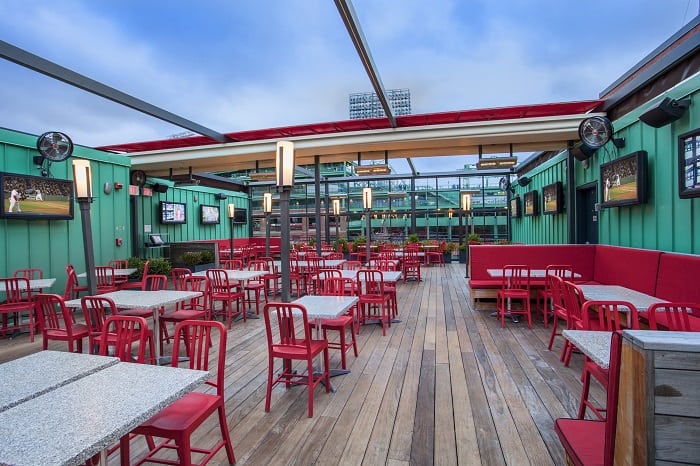 Named after a local baseball legend, Tony C’s is a cool and casual sports bar to grab lunch and few drinks with a big group. The upstairs has a retractable roof in case the weather is good that hour, and a full wall of windows that overlook Fenway Park so you can glimpse that green-monster-green within your first few hours in town. The bar also has cornhole on site at all times, which is a great way to loosen up the group post-grub especially if any of your crew hasn’t gotten to know each other yet (Work Mike, meet College Mike and Cousin Mike).

If you’re lucky enough to pick a weekend that the Sox are home, enjoy the fresh air, a Fenway  Frank, and enjoy the game while you’re at it. If not, take a tour of Fenway Park—it’s a great way to experience one of Boston’s most-beloved landmarks (sorry Paul Revere House). Tours are led by people who truly love the sport and know their WAR from their WHIP, plus you’ll get some great shots for the Instagrams of you and your boys in the dugout or a full-field cover photo from the press box. Not a Sox fan? First of all, why are you in Boston? Have some respect. Just kidding, the tour covers a whole lot baseball history including the team’s frenemy relationship with the Cubs. You’ll have a good time even if you have only the slightest interest in America’s favorite pastime. 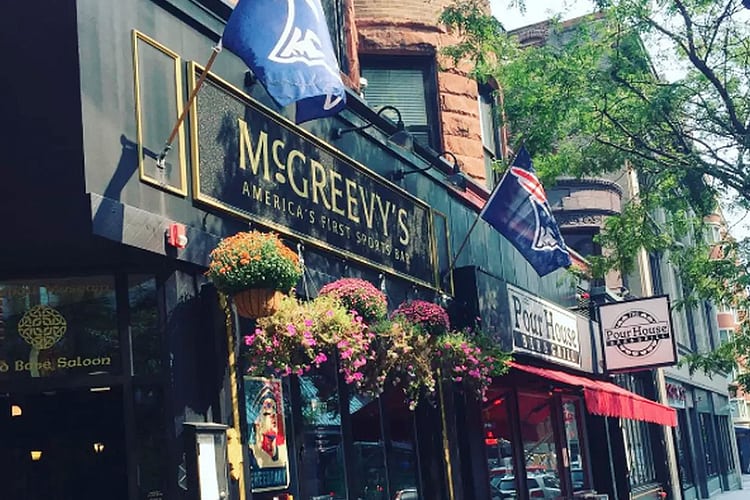 What’s a Boston trip without sticking your shoes to the floor of an old Irish pub? McGreevy’s Pub is a 10-15 minute walk from Fenway and will bring you all the charm (a.k.a. lack thereof) of old, salty, Boston Irishmen. Word to the wise: ordering an Irish car bomb is considered offensive in Boston, particularly at Irish-owned bars. Don’t even ask for the ingredients—they know what you’re doing and people legitimately get kicked out for it. We highly recommend a Guinness though, it somehow tastes better in a bar starting with “Mc” or “O’Somethings.”

Keep the Irish theme rolling but with a heightened party atmosphere, Clery’s is the spot for 20- and 30-somethings to let loose and forget the woes of their (most likely) finance jobs. If you’re feeling particularly, ahem- social, head downstairs to what some affectionately call the “Boom-Boom Room” for a sticky dance floor and a completely judgment free zone. Pro tip: Get to Clery’s before 10pm if you want to avoid waiting in line. Tear it up until you get kicked out (either from behavior or bar-close). Luckily you’re not far from the hotel so try to grab some rack time for tomorrow. 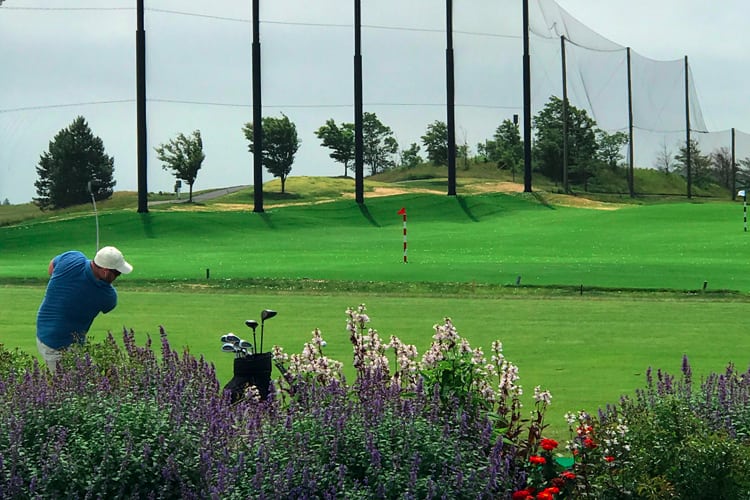 Without burning too much cash, nor your whole day on the golf course, Granite Links is a great place to hit a bucket of balls and recount the night before in order to get all your stories straight. And if the constant ping of a Titleist is too much to handle at least there’s the location to enjoy.

Granite Links is positioned on a hill just outside of the city and offers a great skyline view of Boston. And hopefully someone was wise enough to pack a flask for a celebratory morning nip. No one pack one, huh? Don’t worry, we’ve got you covered.

Spend the afternoon in Boston’s seaport—what was once an abandoned expanse of land less than a decade ago, is now filled with glass high rises boasting some of the city’s most sought after real estate, which brought excellent restaurants and a thriving nightlife (and weekend warrior) scene. Chow down at Temezcal, which has some of the best tacos and guacamole, including lobster guac. That story again: they have guacamole with lobster in it! The restaurant also faces the harbor and has one of the best water views in the area. 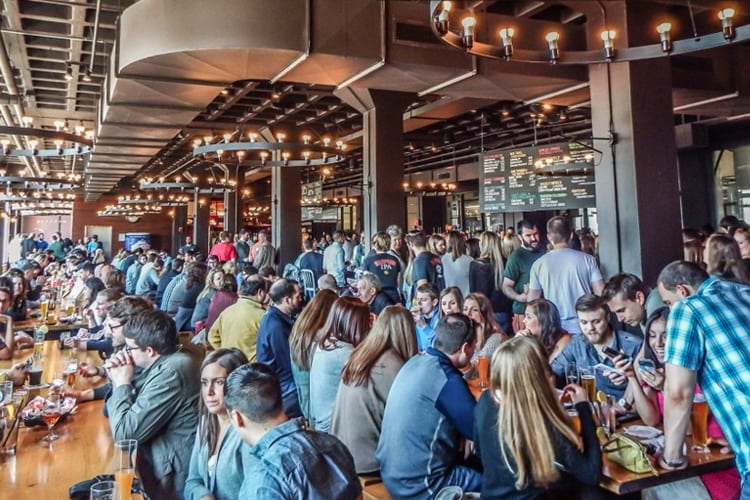 The favorite of Boston’s millennial population, Harpoon Brewery is also in the seaport and always has great beer tastings and a good social scene. Harpoon also has lots of events throughout the year that bring fun crowds, like a Mac n’ cheese challenge, limited release pilot beer samplings, and of course, the mother of all festivals, Harpoonfest.

6 p.m. Dinner and Drinks at Empire

Head down the road to another seaport spot (so convenient!). Empire has the best Asian fusion Boston has to offer, and great cocktails if you’re looking to make the switch from the beers you tasted earlier. We know, we know, “Beer before liquor…,” but a Samurai’s Privilege Martini (Hennessey VSOP, St.Germain, Raspberry Coulis, and lemon) sounds pretty good right about now. The restaurant also has a popular bar and lounge area so you can make the transition over there once the dumplings are gone and gameplan for the night ahead. 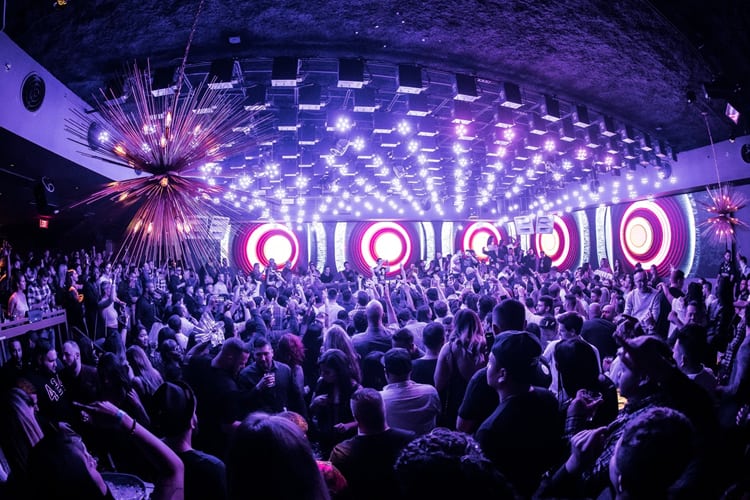 Grab a table and some bottle service, The Grand offers a multi-level party atmosphere that boasts the hottest Boston has to offer, and frequent celebrity appearances and/or performances. With all the different areas in the club, you’ll feel like you’ve gone to five different bars without the annoying part of waiting in line. There is a dress code, so be warned: “Stylish Nightlife Attire Required.”

Speaking of multi-level entertainment, next up is Centerfolds, billed as “Boston’s Only Gentlemen’s Club.” If you don’t quite understand the name of the establishment, you better ask your dad. And despite your current BAC, you will need to act like a gentleman to fully enjoy 100+ entertainers, a shower dance stage, and private parties if your group wants the VIP treatment. They provide their own currency exchange for “diamond dollars” but you know better than to trade real dollars for that funny money. Remember when you tried bitcoin? Also, you’ll want to brush up on how to stay out of “Stripper Jail.” Trust us, it’s a thing. 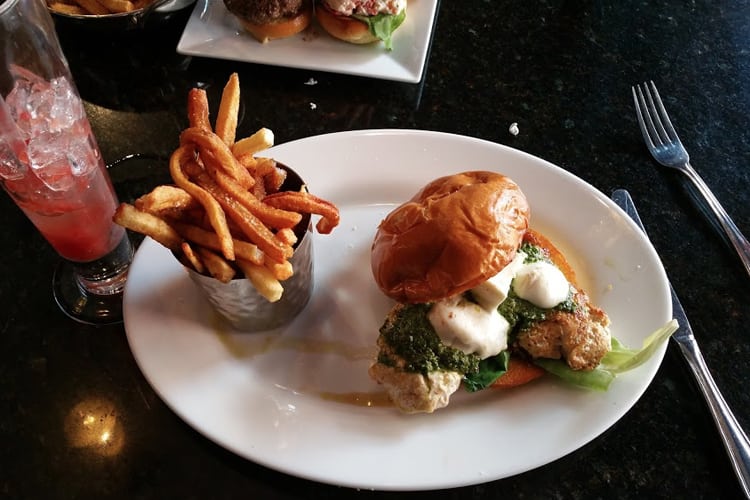 Tucked into Boston’s North End—the Italian food and culture center of the city—North Street Grille has every pancake, French toast, or eggs benedict flavor combination you can imagine. Pop some ibuprofen, down that 36oz. bottle of Aquafina, and head over there to continue your quest for a cure to your hangovers. Just so you know, the cocktail menu is even more extensive than the food menu if you’re up for a little hair of the dog. Just saying!

Yes, another Irish pub before your weekend wraps! Enjoy the bar that’s made vodka lemonade out of Boston’s War on Happy Hour and put its stake in the ground on offering cheap drinks all times of day or night. As you get near the end of the weekend, the squad may be getting a little strapped for cash—especially anyone who fell in love at Centerfolds (No she likes me, she even told me her real name!). Round up whatever singles didn’t make it into her college fund, and hit Coogan’s for dollar drafts.

Known by many to be the best pizza in Boston, rivaling the more tourist-known Regina’s (please don’t @ us) Santarpio’s Pizza will get you on the side of the harbor you need before you pull the ripcord on this city that likely chewed you up and vomited you out—hopefully not on our sidewalks, though. But come back soon! (Or, you know, don’t.)

Get back to where you came from via Logan International Airport, and try to remember some key points of the weekend to retell that don’t incriminate yourself or any of you friends. Grab an in-flight bloody mary and huddle with the guys to get those stories straight before you touch down and clarify what can and can not be included in the best-man toast. Cheers!