Are You Trying To Be Funny?

Your wedding speech has to be funny. It doesn’t have to be hilarious, and it shouldn’t be a stand-up routine. But you do have to at least try to make people laugh. Unfortunately, that old saying “dying is easy, comedy is hard” is actually true (well, the comedy part, anyway).

There is no better way to win over an audience than by opening your wedding speech with a hilarious joke. The problem is this: humor takes timing, finesse, and the ability to read a room. If you lack these qualities, you will be better off simply delivering a heartfelt speech than trying to be funny and ending up an epic failure. There are numerous pitfalls: if your jokes come off as awkward or forced, that’s much worse than having no sense of humor at all.

If you are making a best man speech, you should tell a few jokes at the expense of the groom; that’s fairly safe terrain since it’s his big day and he is nervous and you might even help him relax by laughing at himself. The key here is to keep your humor soft. For example, you might say: “I was talking to the bride earlier and her cell phone kept ringing. The good news is, it was her groom. The bad news is, she couldn’t figure out how he got her number.”

Even if the wedding band’s drummer doesn’t give you a rim-shot, everyone in the audience will be imagining it. Sure, it’s a pretty terrible joke, but it’s amusing and will put people at their ease.

2. Don’t Spare Anyone Else

Nobody really cares if you roast the bridesmaids and groomsmen, so feel free to do so. But keep in mind that people often feel more chivalrous at weddings, and might challenge you to a duel if you hurt one of the bridesmaids’ feelings. Save your sharpest barbs for the groomsmen, and the occasional bridesmaid who you know can take a good joke. 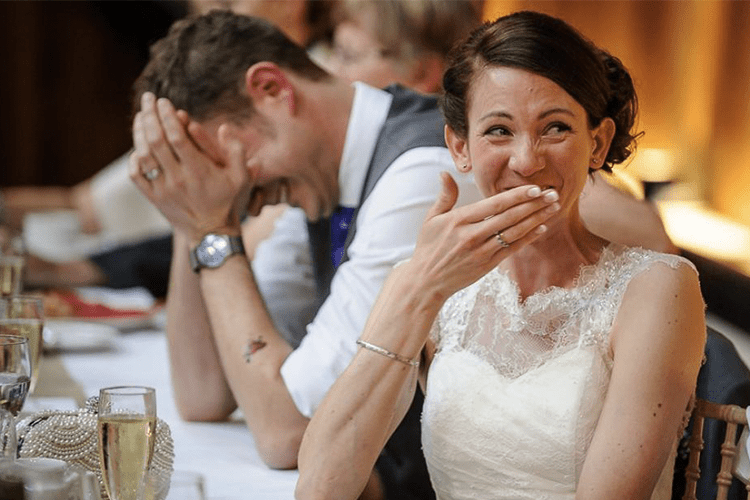 The one exception to all of the above is the bride. Making jokes at the expense of the bride is like diving into a volcano: one moment you’re having an awesome vacation in Hawaii, the next you’re taking a bath in molten lava. Her nerves are cranked up to the breaking point, and her brothers are a couple of savage brutes who’d love to crush you like a nut cracker crushes a walnut. Don’t make her the butt of even a light-hearted joke. Just say how beautiful she looks, and how happy she makes the groom.

There’s an old SNL skit where Phil Hartman plays Frank Sinatra and delivers the following bit of wisdom: “You don’t need to work blue! You’ll never play the big rooms with that crap.” Listen to fake Frank Sinatra. Nobody wants to hear dirty jokes at a wedding. At the bachelor party, yes. At the rehearsal dinner, maybe. Not at the reception.

Political or ethnic humor is a third rail on which only the most sure-footed should attempt to walk. Even if you think you know how to make such material work (and you probably don’t), this is not the time or place. Have a great Polish joke that you are sure will just kill? Leave it at home: you never know if the waiter pouring your drinks is named Wladamir Kowalski and if he’ll be taking a piss into your next glass of white wine.

Yes, we are talking to you, and no, you shouldn’t do your Robert DeNiro impression during your wedding toast. Puns, limericks and intricate wordplay should also be avoided. For one thing, you’re supposed to be focusing on the bride and groom, not dusting off the material from an old Shecky Greene record. Any joke that begins, “there once was a man from Nantucket,” will end badly.

Let’s say you are a fan of the absurdist, surrealist style of comedian Steven Wright. That’s all well and good, but a wedding is not the time for you to be bizarre. Even more important than being funny, you must strive to make sense. You may very well be talking into a crappy microphone through a rented PA system to a room of elderly relatives, who in the best of circumstances will be saying, “Whaaat? What did he say?” Don’t add to the confusion with your clever post-modern, post-logical non-sequiturs.

The hardest thing about being funny is making your humor seem effortless. A labored joke is a joke that doesn’t work. Professional comedians have an advantage in that they generally learn what works by trial and error, doing stand up comedy in clubs and seeing what gets a laugh. But when giving a wedding toast, you don’t have the luxury of honing your material beforehand. You have to get up there and deliver a speech, so avoid jokes with long set ups or overly complicated punchlines.

9. Don’t Be Too Personal

Despite what we just said, a professional comedian would not necessarily have an advantage in this case. Humor in a wedding speech has to come in just the right amount. Too much is almost as bad as too little. If the best man has hundreds of hours of standup experience to draw on, that’s an advantage. But if he just gets up and does “bits,” he’s going to bomb in this room. Remember, the wedding speech is supposed to be from the heart—this is someone else’s special day, not open mic night at the Laugh Factory.

Humor is essential in a wedding speech. Use humor like salt: a little here and there, but not so much that you give your audience a stroke.

6 Things To Include In Your Groom Speech

Preparing for your best man toast? Get inspired by these dudes who crushed it.

Women Weigh In On Wedding Vows

The key to nailing your vows is to speak to her like you would in private, but just in front of 150 people.

Should You Memorize Your Vows?

It all depends on how well you learn your lines.