What you don’t say in a wedding speech is often as important as what you do. Making your audience read between the lines not only adds to your charisma, it also allows you to make points gracefully, and skirt around awkward issues.

It’s Not a Deposition: It’s a Toast

Sure, you could go out there and make a wedding speech that’s literally about how long you’ve know the groom, or about all the amazing times that he and the bride have had, and blah blah blah. That would be about as interesting as a goat chewing grass.

Try to aim higher than merely saying what you mean. In order to give a truly great speech, you have to master the art of speaking between the lines. Charisma is all about subtext.

You have to relate to the room not only on the conscious level, but also by addressing their unconscious minds, so they get an intuitive understanding of exactly what it is you’re trying to say. 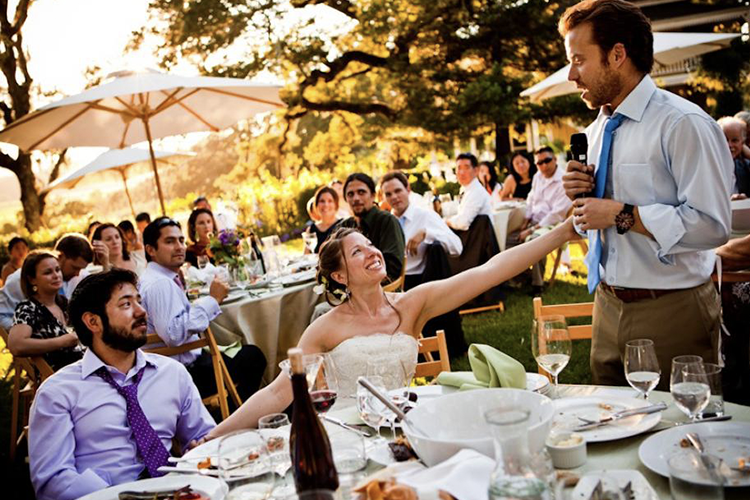 Subtext allows you to address sensitive topics with humor and ambiguity.  Let’s say the bride is a bit of a…what’s the word? Ball-breaker. Instead of characterizing her as  “a tactless diss machine,” you can praise her for “refusing to kiss up to anyone.” If the groom is always broke, he “has the rare ability to realize that money isn’t everything.” The couple met on a dating website for people with herpes? They have a “refreshingly modern romance.”

The wedding guests will know what you mean, but by referring to it obliquely, you’re being tactful and forgiving, turning an unattractive trait into a shared joke. For one night, you don’t have to hit the nail on the head.

The best wedding toasts are like a classic episode of The Simpsons. Idiots and geniuses can listen to the same words and both find reasons to laugh. Try to make your speech full of both explicit and implicit meanings. Address your close friends in the room with an implicit wink, without alienating the parents, grandparents and family friends who will hear the exact same wedding speech and yet hear an entirely different message.

Though you want your wedding toast to seem straight-forward, honest and emotional, you can’t just say whatever is on your mind. Be direct when you’re talking about the obvious stuff. But for the deeper stuff, use subtext.