The most important part of your speech is the first seven seconds. During these precious moments your audience will decide whether they like you or not.

When you write a wedding speech, you will understandably be tempted to labor over every line. While you want to make sure the middle and end are as entertaining as possible, you really want to spend the most time crafting the beginning–specifically the first seven seconds. That’s about a sentence and a half, maybe two.

“Well, nameless guy from The Plunge,” you may be saying to yourself, “that sounds like a pretty arbitrary number.” Sorry baby: it’s science. Research shows that people start making up their minds about each other within seven seconds of first meeting.

Here are 5 ways to make a super powerful impression in the first sentence of your wedding speech.

Before the 1st Second: Pick Your Look

This is a wedding, so you will presumably be in something other than sweatpants. But think about your accessories, too.  A tasteful ring, a nice watch, and smart-looking shoes are all ways to signal that you are a man worthy of attention.

Consider your timepiece. If you roll up your sleeve to reveal a plastic Timex, you’re letting people know that either 1) you have good values and don’t waste money on useless vanities, or 2) you lead a sad, lonely life. But if you flash a Rolex, before you even open your mouth, you’ve told the room, “Watch me: I’m either rich or I steal expensive watches.” Go big, and go bold. 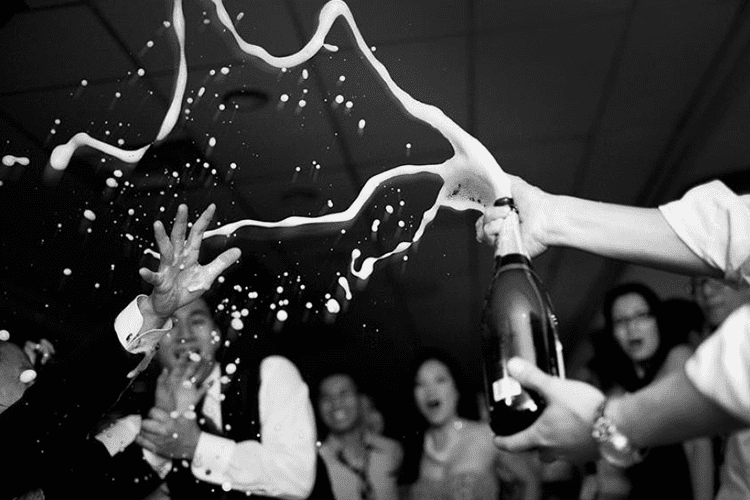 Take a few breaths before you pick up the microphone and “set an intention:” picture yourself getting laughs, tears, and a 20-minute standing ovation. This might seem like new age hocus-pocus, but a growing body of science shows that when you visualize something, you are literally rewiring your brain on a cellular level.

Remember, the one thing that will make your audience uncomfortable is the idea that you are about to put your foot in your mouth and say something totally clueless or offensive. They’ll be more inclined to feel this way if you’re nervous. On the other hand, if you’re calm, confident and commanding, everyone will relax and love you.

Of course if you’re nervous, you can always resort to the old trick of picturing everyone in the room wearing their underwear. But remember: your uncle Leon is in the room, and that may become distracting. His whiteys are not tighty.

Everything from your posture to how you carry yourself to the way you’re angling your body will send cues about whether you’re a baller everyone should to listen to, or a schlump to be ignored.

The good news is, you don’t have to take Alexander Technique, yoga or ballet to improve your posture (though, let’s be honest, your slouch is really appalling.)

Simply being aware of your body language can result in immediate changes for the better. Stand up tall, as if your head was being suspended from above by a string. Your body should be like an exclamation point, not a question mark.

Remember a wedding toast is not a radio broadcast. People will be getting as much information through their eyes as through their ears. So take full advantage by spreading your arms wide, smiling, and moving around in a way that projects complete ease.

You want to see some expert examples?  Watch a few stand-up comedy specials with the sound off, and study how those guys move on stage. They’ve trained in comedy clubs, in front of some of the most unforgiving audiences possible. We’re not saying you should pace back and forth like Chris Rock during your speech, but don’t just stand there with your eyes glued to your notes, either.

People always say “Just be yourself,” but one problem with that plan could be that you suck. In that case, don’t be you. Instead, try to channel Humphrey Bogart or Jay Z. Bring a hype man. Maybe mention how you used to grind in the ghetto as a crack dealer and now you’re married to Beyonce. End your toast with a mic drop. There is no law against identity theft. (Actually, there are many laws against identity theft. But in this case it doesn’t matter, because no one will actually think you are Jay Z.)

You have seven seconds to make a good impression with your speech. Use that time to establish your confidence and ease, and you’ll have them eating out of your hand.