The short, easy flight to Mexico, combined with its sprawling sandy beaches and affordable lodging certainly make it a favorite honeymoon destination. But if you need more convincing, consider the infinite tacos: because nothing says newlywed romance quite like, “Honey, you’ve got salsa dripping down your chin.”

Wander through ancient ruins or chow down on modern, fine-dining meals. From jewel-toned beaches of the Caribbean in the east, where culinary masterminds set up beachside seafood feasts to the bustling cultural capital where tamale stands pepper street corners, Mexico offers honeymoon experiences for every kind of couple. Best of all, every day can be Taco Tuesday. -By Naomi Tomky

The first question most people ask about a Mexican honeymoon is often, “Is it safe?” No, we’re clearly suggesting you step into certain death. Come, on! If that’s too much to handle, might we suggest another destination?In reality, there are parts of Mexico that should be avoided, and the U.S. State Department posts warnings when that’s the case. Otherwise use the usual caution you’d use almost anywhere: lock your valuables, watch your wallet, and don’t do anything idiotic. (Yes, that includes buying, selling, or using drugs. Seriously.)

Also, make sure to take into account weather as you plan. Hurricane season on both coasts ramps up in August and stays strong through October. If you go to the beach during hurricane season, you may save some money, but make sure to have a plan B—colonial cities inland, or even Mexico City. And don’t forget to find out if your airline and hotel have weather-based cancellation policies.

Remind Me: Why Mexico? 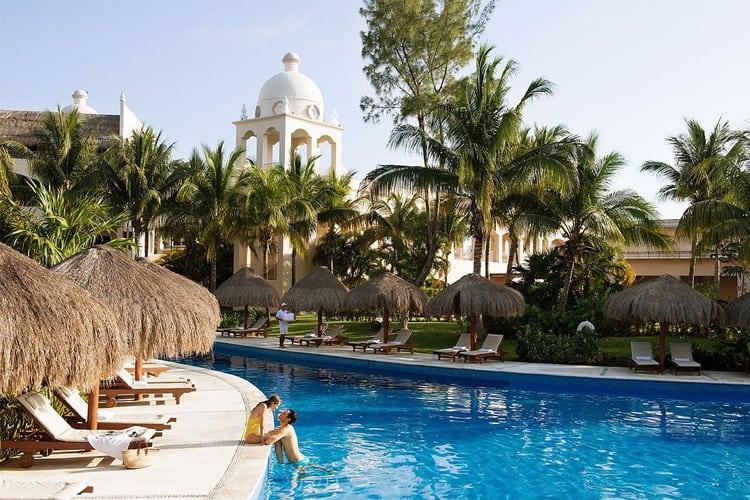 As you might expect in a country almost three times the size of Texas, Mexico has a little bit of everything. 5,800 miles of shoreline along the Pacific Ocean, Caribbean Sea, and the Gulf of Mexico make for beach resorts galore, whether for surfing, fishing, or simply laying in the sun.

The favorable exchange rate keeps prices reasonable, ranging from $125 a night at Mexico City’s Red Tree House, covering a stellar breakfast with churros and wine happy hour at one of the most welcoming hotels in the world, to the classic all-inclusive experience in Tulum, where $360 a night gets you acres of white sand and endless margaritas with top-shelf spirits.

While Spanish is Mexico’s national language and the peso its currency, English is widely spoken, and dollars widely accepted (though sometimes at a pretty poor exchange rate), especially at honeymoon resorts and their surrounding areas, so visitors are unlikely to run into issues unless they’re pretty far from the beaten path. In which case, you got yourself into this mess, you get yourself out.

Speaking of messes, this seems obvious, but you’ll be in one if you forget it: Mexico is a foreign country; bring your passport. If you’re leaving right after your wedding, make sure you know where yours is and when it expires (you’ll want it to be six months after the trip) well before the big day. More on that type of planning right here.

Where To Stay in Mexico

Like we said, Mexico is pretty damn big and there’s a ton to see, so we’ve divided the country up into four, honeymoon-friendly areas. There’s certainly more to see but these are all great starting points and home bases for further adventuring. 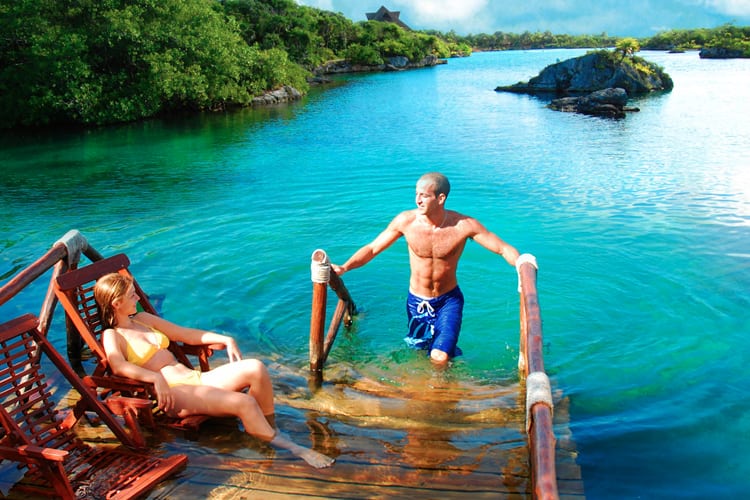 While Cancun (which is where you’ll fly into, followed by a 1.5-hour drive) anchors the Riviera Maya in the north, Tulum holds down the southern end, appealing to those looking for a slower pace, magical scenery, and endless activities. Once a sleepy yoga-retreat town, it recently became a haven for high-end chefs at restaurants like Hartwood and Casa Jaguar. A home base in an oceanside cabana at the Papaya Playa Project ($200/night), the jungle-side luxury of eco-boutique Sanará ($430/night), or a jacuzzi suite at the all-inclusive, adults-only Kore Tulum ($400/night) provides the perfect jumping off point for a trip.

Jumping off to what, you might ask? Well, besides the usual beachside activities, hammock-laying, sun-soaking stuff, Tulum is something of a yoga destination and boasts excellent spas, so embrace the honeymoon vibe and chill out a bit. For a bit more activity, the area features Mayan ruins and walking around them will help you work up an appetite for the excellent bar scene: places like Batey for its famous mojitos, Gitano for the DJ and house cocktails, Papaya Playa Project for full moon parties, and Pasito Tun Tun for drinking incredible mezcal while sitting on a swing.

Swim off your hangover in the fascinating darkness of a cenote: a unique natural underground pool, thousands of which dot the region. Find the major ones solidly on the tourist track or dig into jungle exploration and hike through the greenery to one of the more hidden caves. 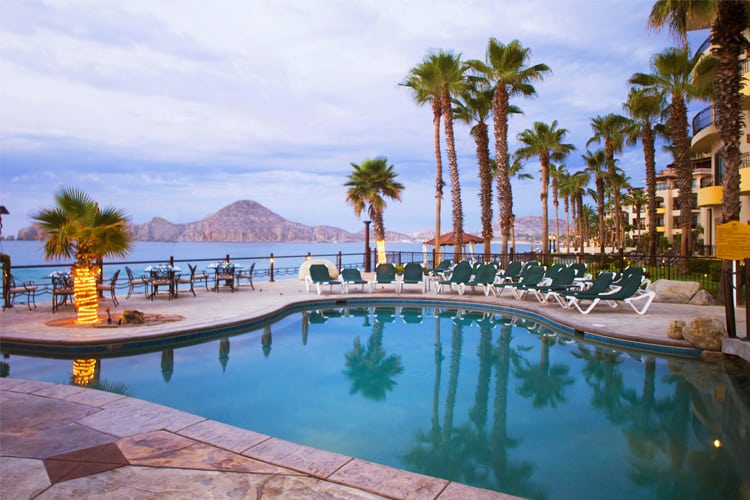 At the southern tip of Baja California, where the Pacific Ocean meets the Gulf of California, a pair of towns—and the 18-mile corridor between them—cater to sun-seeking tourists. Together, San Jose del Cabo and Cabo San Lucas are referred to as “Los Cabos,” but make sure you know where you’re booking: Cabo San Lucas is the modern party town with high-end shopping, San Jose del Cabo is a laid-back town with boutiques and adorable architecture.

For a beach on a budget, Cabo can’t be beat: less than $1000 will get you flights and a full week of all-inclusive fun (and even an adults-only area) at the Holiday Inn Resort on CheapCaribbean.com. But the area runs the spectrum, and higher-end places abound, like the Grand Velas ($3600 all-inclusive for the same week and flights).

Picturesque beaches with soft sand and warm water for swimming are the main draw here (along with Instagramming the Arch of Cabo San Lucas, which marks where the Gulf and the Pacific meet, obvi), but when you need a break from cervezas in the sand (it does happen, eventually), get out on the water: book a boat ride. From booze cruises to sunset sails, the market for recreational boating here is hot as the mid-day sun, so don’t get burned by bad tour touts. For a different side of the water, book a deep-sea fishing trip to look for marlin, tuna, and mahi mahi.

If you get skunked on the seas, there’s no shortage of spots in town to find fish tacos at place like Mariscos El Torito and La Casa Del Dorado. For something a little fancier, check out Manta, by Mexico’s most famous chef, Enrique Olvera. 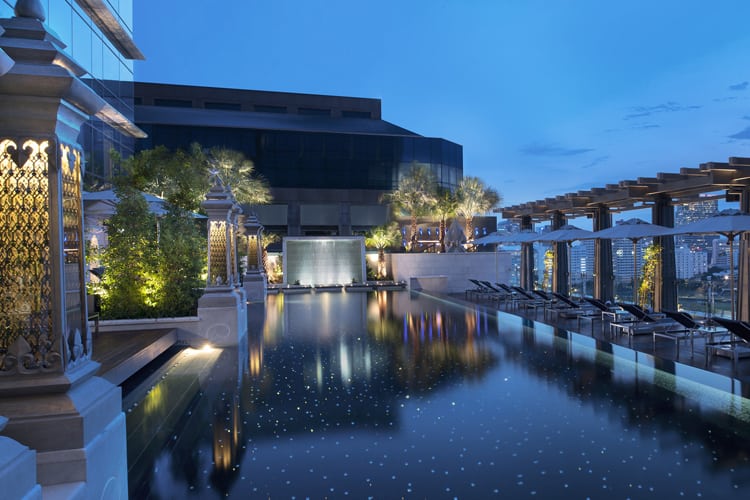 If spending your honeymoon with 26 million other human beings sounds like a good time, Mexico City calls your name. Okay, the mass of humanity might not be the most charming feature of CDMX, as Mexico’s political, cultural, and culinary capital goes by for short. But the bustling metropolis holds plenty of romantic vacation appeal: some of the best fine-dining in the world, five-star and boutique hotels, ancient ruins, and leafy suburbs navigated by canal boat.

For a traditional honeymoon feel, book a high-end hotel for about $300/night: either classic luxury at the St. Regis or modern style at Hotel Carlota. For a more affordable stay, check out the central and rooftop digs of Chaya B & B, around $100. Otherwise, anywhere in the Condesa or Roma neighborhoods will keep you close to the good bars and make for a good starting point for walking around the historic center, hopping a tour bus to the ruins of Tenochtitlan, or calling a ride share to bring you to restaurants like Quintonil, Fonda Mayora, and Contramar to eat the best Mexican (or almost any) food in the world for money that would barely buy you a decent steak in New York City.

To escape the whirlwind urban atmosphere, schedule a day on the canals of Xochimilco or wandering the quiet suburb of Coyoacan, where Frida Kahlo lived—and her house now serves as a museum. But come back to the center for the nightlife: bars like Bosforo, Clandestina, and Licorera Limantour will teach you a lesson on mezcal and sling world-class cocktails your way. 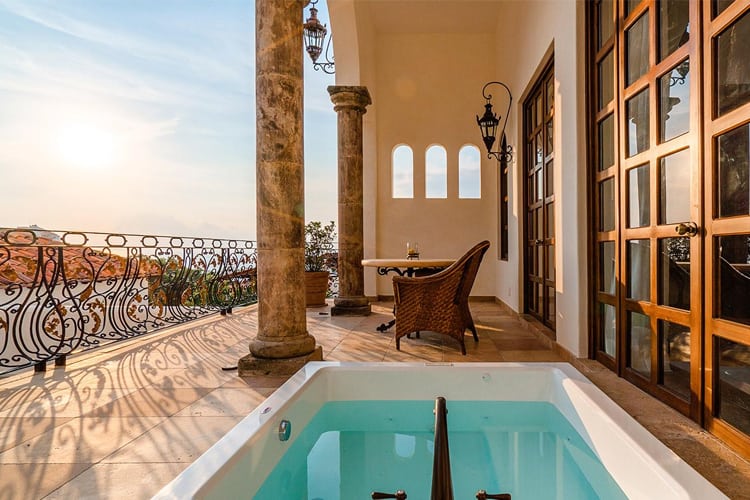 In the shadow of the Sierra Madre mountain range, the golden sands of Puerto Vallarta stretch out in front of a veritable line-up of hotel options. Like Cabo, PV caters to any budget, from the low-end Sunscape or Golden Crown, which will run you about $1150 for airfare and a week at the all-inclusive properties, right on up to Secrets for the same, but adults-only and $2250, as priced by CheapCaribbean.com.

But wherever you stay, the warm waters and party-friendly town invite you to relax and enjoy yourself. Head north to Sayulita for the best surfing around, or hop a boat out to the secluded village of Yelapa for a less-crowded beach. Fishing boats, whale watching tours, and sunset sails abound, but the smart folks reserve an early morning voyage to the Marietas Islands, where rare species such as the blue-footed boobies live, and you can swim under a cave formation through to what’s known as Hidden or Lover’s Beach.

When you’re done watching the wildlife, you can eat it: sidle up to Cerveceria Union for craft bears and freshly shucked oysters or to Ocean Grill for marlin tostadas. For something fancier, head to Tintoque for a 9-course tasting menu or La Leche.