Get started
Fiancé What?

If Her Parents Pay, Does He Have Any Say?

While we’re pretty full of ourselves here at The Plunge, we admit that sometimes we have no idea what women want out of the wedding planning process. That’s why we turn to our friends at BRIDES whenever we need an honest, female point of view. Check out this latest insight from the bride’s side.

The phrase “penny for your thoughts?” is employed if one party in a conversation has noticeably refrained from offering his two cents. When it comes to grooms and wedding planning though, that can happen because it seems like he’s the one who should be throwing money at the situation to voice his opinion.

According to this year’s WeddingWire Newlywed Report, millennials are paying for approximately 40-percent of their wedding, but parents or other family members are still coughing up the majority of costs. A lucky twenty percent of millennial couples will have their big days covered in full by someone else.

If the bride’s family is bankrolling most, if not all, of the affair, does that mean they call the shots? Do you have to buy your way into decision-making? (It reminds us of that scene in Disney’s Aladdin where a disguised Jafar says to the very poor street rat, “You’ve heard of the golden rule, haven’t you? Whoever has the gold makes the rules.”)

First, know that you absolutely should have a say in your wedding. While we may not agree on buttercream or whipped icing, if we’re marrying you we like at least some of your tastes. Never feel silenced when it comes to weighing in on this celebration that wouldn’t be taking place without you.

Alas, the real question here is, “Can you expect to be heard?” Sadly, that one is tougher to answer because in-laws run the gamut from “second family” to “certified sadists.” Though we can’t predict where yours will fall on the spectrum, we can propose some practical considerations when choosing and fighting your battles.

1. Recruit Your Fiancé as an Ally

Remember that your soon-to-be wife lived behind frenemy lines for years. She’ll know all their usual tricks, and how to best negotiate (read: manipulate) a little bit. Will flattery get you everywhere with her dad? (“You’re the perfect person to help us pick a vintage car for our reception exit since your auto knowledge is the stuff of legend!”) Does her mom actually just want to be asked what she thinks, and won’t push back as long as she’s involved? (“We may have found our perfect invitation design, but want you to look over it.”)

If you know the layout of the land, you can sidestep lots of argumentative landmines before anyone gets hurt. When you do come across an issue worth challenging (Peach is not your color, man), prep your partner so you can bring it up in conversation together as a team, instead of blindsiding her and unwittingly creating a “you versus them/blood is thicker than prosecco preference” scenario. 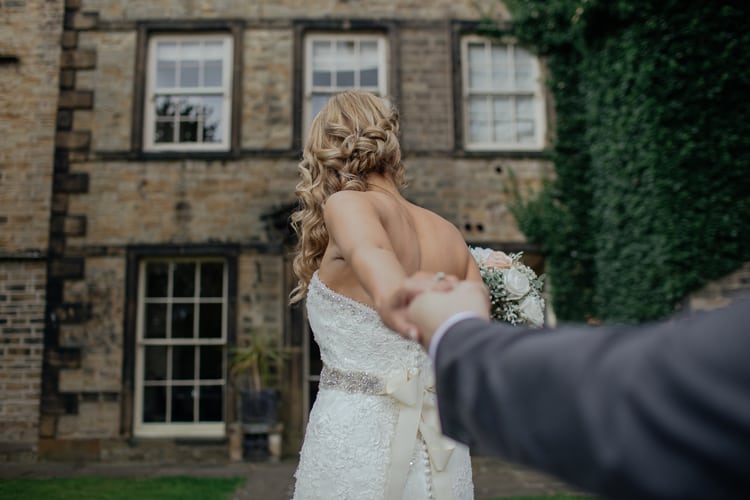 Not to generalize here, but most grooms only care about a few choice wedding details—attire, entertainment, booze, food. If her parents love arguing for the sake of arguing, identify which areas are most important to you, and be overly accommodating when it comes to everything else. Your positive attitude will store up good juju that you can call upon when it’s time to disagree with her mother’s polka band suggestion.

3. Use Metrics to Your Advantage

It’s a mostly safe bet that saving money will appeal to your bride’s family, so your ideas will likely get more traction if they’re less grandiose and/or pricey. As long as you don’t insult your future in-laws with an implication that they can’t afford something, you can easily work cost-effectiveness into your case. If the stuffy country club they’ve endorsed as a venue option clashes with you and your lady’s laidback nature vibes, maybe mention that an outdoor ceremony in a public park will free up funds for another undertaking.

If her parents do insist on talking numbers to establish sway, here are a few you might ask them to consider: a marriage is about two becoming one, and you are ½ of this union. Therefore, shouldn’t the wedding aspects reflect the joining of two lives, both halves, in order to feel whole? Plus, you are 100-percent in love with their daughter, so your viewpoints will have her at their forefront anyways. And finally, the number of grandchildren resulting from this union that they’ll see on a regular basis if they refuse to play nice? Zero.

Even More Fiancé What?

How to Talk About the Bachelor Party (Before, During, and After)

A quick run-through of how much information you’re expected to divulge about the classified goings-on of your “Farewell Tour.”

Can Someone on the “Ex-List” Make it to the Guest List?

There may be some cases for an individual on the “ex-list” making it on the guest list.

While we’re pretty full of ourselves here at The Plunge,...