Football attracts a special kind of psycho at every level of the game, be it the head coach who sleeps three hours a night under a bench press, the quarterback who sleeps with All-22 footage acting as white noise, or the fan who has both of their signatures on official team bedsheets. Players will pay humble lip service to the fans, but it really is up to us who are willing to channel, embrace, and unleash our psycho-sides for football to be its best. For centuries, we fans have simply flocked to local sporting events. Eventually, with the advent of TV, air travel, and feelings, we could follow a team easier with both more knowledge and more passion. That spark led to sport-wide fanaticism, which then bred comradery with our fellow man, universal resentment of spring and summer, and, ultimately, this here endeavor designed specifically for your bachelor party contingent to have “The Best Football Weekend of Your Life!” 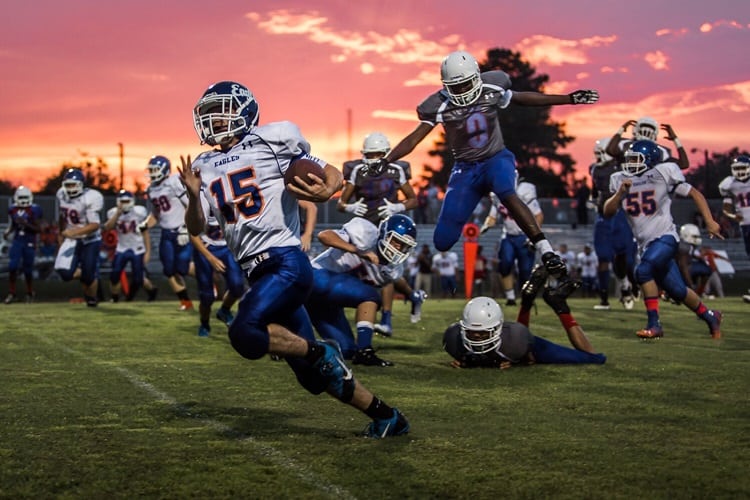 Most NFL cities have the alluring, reliable benefits that make an outstanding bachelor party weekend. What a select, elite group of those cities also have is a nearby college with a fairly decent football program and a whole other ecosystem of fandom needing to survive and thrive. That college/pro combo orchestrated correctly, could easily be nominated for a Best Bachelor Party Award. But when that city also has a coffee shop, a liquor store that sells whatever may fill that emptied disposable coffee cup, and a Friday night high school football game brimming with the hope and promise of bright futures ahead (and lacking the adequate security willing or able to check the contents of incoming coffee cups), then you have the potential for the greatest weekend imaginable, starring wall-to-wall football and the fanatical gentlemen necessary to make it all work.

If only someone would do the schedule-crunching legwork …