A Member Of Our Staff Takes The Plunge With Blue Nile

I met my fiancé Laura in community college, in a class on macroeconomics. Romantic, right?

I spent a few weeks chatting her up in class until I gathered the nerve to ask her for a ride home. On the way, we stopped at an Applebee’s. I got a salad:  I didn’t want her to think I was an animal. She got a sirloin steak. That was our first date.

After two weeks we were seeing each other exclusively. After a month and a half, we took a trip out to Greenport, which is a small town on the north-eastern tip of Long Island. I wanted to do something nice, but as a broke college student, my options were pretty limited. Greenport seemed perfect, close enough that we could drive but far enough that it felt like a getaway.

On the second day, we took a ride to Orient Point. The weather was pretty gross, overcast with that kind of misty rain where you don’t need an umbrella, but aren’t looking to have a picnic either. We sat in Laura’s beat up old car looking at the water and eating ham and cheese sandwiches, then spent a few hours wandering around the park in the mist. It was perfect.

I knew when we were at the beach on that rainy day that Laura was different than anyone else I had ever dated, and that our relationship was going to be different too. That’s the moment that it clicked for me that she was perfect. 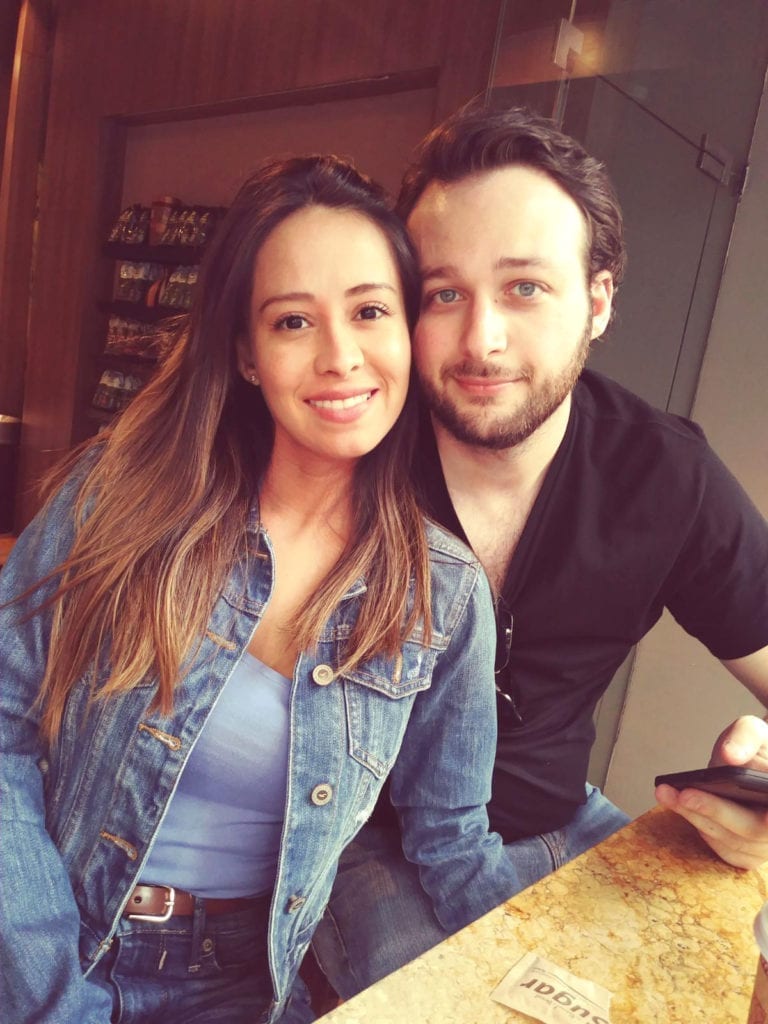 Around six months ago, I started really thinking about how I wanted to propose.  I wanted to get Laura something she would love without going completely broke by making the purchase. Blue Nile seemed to have the best pricing and selection of all of the larger online retailers. Previously I had bought Laura a string of pearls there as a gift, which she loved. Actually, she loved the second string of pearls.  The first one was too long, but the Blue Nile customer service was great and helped me get the ideal piece.

Shopping For The Ring

I also knew I wanted to pop the question on that same beach. But first I had to buy the ring. I spent a lot of time figuring out exactly what she wanted, and because I work at a website about wedding planning, I had the perfect excuse.  At first, Laura wanted something flashy, a rose gold halo with a round stone. Laura and I had even stopped by the Blue Nile store at the Roosevelt Field Mall, where after looking at about 10 other possibilities, she showed me a setting she loved. In the end, she came to the conclusion that she really preferred something simple and elegant: a six prong solitaire.

I worked with Blue Nile’s customer service on the phone to identify the exact setting. But I had one last piece to find: the diamond. I did a ton of research, educated myself on the 4C’s proportions, and the little attributes that make them each unique, and figured out exactly what I wanted. It was easier than was rumored, and I found a great stone. My selection for her was an Astor Ideal cut, which happens to be Blue Nile’s premium selection of diamonds.  After I made my selection, Blue Nile was able to deliver it in three business days, just in time for Labor Day Weekend. I couldn’t believe how much that thing sparkled when I got it delivered.

It All Comes Together

On the Friday before Labor Day, Laura and I both took off from work and headed out east of New York City to Long Island. I told her we were going to the aquarium in Riverhead, but I wanted to make a quick stop in Greenport to hit the beach and grab lunch.  We stopped by Orient Point, and–in the same place I realized she was the one–I asked her to marry me.

I think there are two keys to a great proposal: do it in a meaningful way and make sure that she’s totally surprised, even if she’s totally expecting you to propose soon. Laura definitely didn’t see it coming, and her response was a mix of surprise and excitement, exactly what I hoped for. Later, on the ride home, she said that the proposal was perfect, the ring was perfect and that she couldn’t have thought of a better place to say “yes.”

We review the online diamond and ring shop Blue Nile, focusing on selection, price, return policy and other criteria.

Here's our handy guide to why the "Cut" is the most important of all the 4Cs when it comes to choosing the perfect engagement ring for your beloved.

Consider this the ultimate cheatsheet for knowing the difference between diamond shapes and cuts when you're shopping for the perfect engagement ring.

Engagement Rings for Under $4,000: Buyer’s Guide

What kind of engagement ring can you get for $4,000? We show you the options, explain what to look for, and offer alternative styles.

Here's everything you need to know if you're interested in purchasing a marquise-cut diamond engagement ring for your beloved.

Here's everything you need to know if you're interested in purchasing a round shape diamond engagement ring for your beloved.