Should You Memorize Your Vows?

How to Write Vows

6 Things To Include In Your Groom Speech

The Best Man’s Speech is one of the highlights of the wedding, and it should be fun, funny, and heartfelt. But this is also one of the prime opportunities for the reception to go off the rails. Make sure you avoid the common danger zones.

Search YouTube for “Wedding Fail” videos, and most of them will be of best men bombing (also a lot of clips of: the groom’s pants falling down at the altar; a waiter dropping the cake; and the bridesmaids body-checking each other to catch the bouquet).

Why is this, when a wedding reception is one of the easiest audiences you’ll ever face? Usually it’s because guys think they have to do something outrageous, and they end up shooting themselves in the foot. In order to save yourself from this fate, there are a few things you must avoid. Six, to be precise.

As the best man, you have wide latitude to throw some zingers. But there is a third rail you cannot touch: insulting the bride. No one sets out to do this, but some idiots think they can get away with lightly teasing her. They forget that a woman loses all sense of irony on her wedding day. We don’t care if she’s sharper than Tina Fey in real life, or if she can dish out more savage burns than Sarah Silverman at an MTV celebrity roast: on this day, she doesn’t want to hear it. Don’t express amazement that she is actually wearing white, or say things like “Let me be the first to ask the question everyone is wondering—when is she due?” 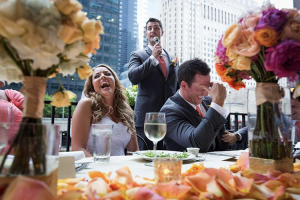 Are You Trying To Be Funny?

Of course, some good-natured ribbing is in order when it comes to the groom, but you are there to celebrate him, not perform a public takedown. So keep the teasing light-hearted and warm. Your best bet is to tell a funny anecdote or two that paints him as a lovable slob who has been vastly improved by meeting the bride.

As we’ve said elsewhere, there are a couple of things you should avoid when crafting this anecdote: anything that would offend his grandma, and anything that mentions past girlfriends. For instance: “I was surprised the happy couple decided to honeymoon in Maine. Billy hasn’t been there since he dated his old girlfriend Jill. I remember cause he told me he was going to Bangor for a week.”

Yeah, don’t do that.

People are living longer these days, so there will be some guests at the wedding who are old as dirt. They might be the bride’s grandparents, or they might just be cousins who never used sunblock—you can’t be sure. Treat them all with respect. Don’t say something like, “The bride’s grandparents flew here all the way from Arizona—just wanted to make sure nobody mistook them for raisins and dropped them in a champagne glass.”

4. Avoid Mentioning Sex with the Bridesmaids

As best man, there is a high likelihood that at some point during the wedding weekend, you either screwed one of the bridesmaids, or (more likely) fantasized about doing so. Remember that discretion is your friend here, and that bragging rights should be saved for a later time. No one is going to high five you if, during your speech, you say something like: “I hope the bride and groom have even half as much fun on their honeymoon as Becky and I had just now in the cloak room while you were enjoying the pineapple shrimp hors d’oeuvres.” 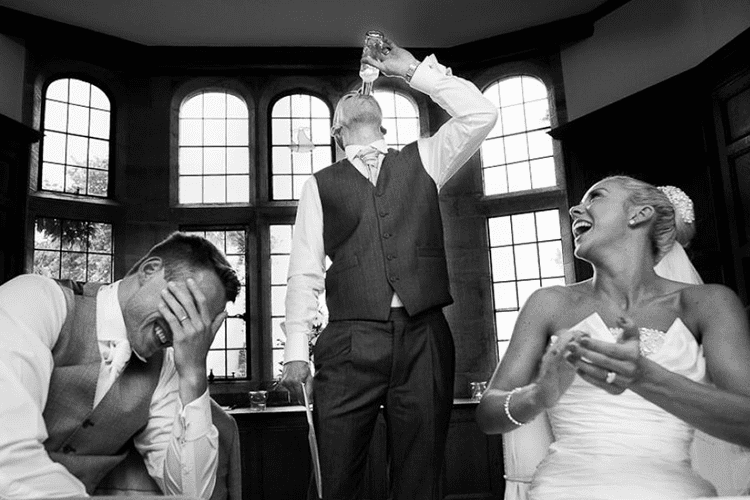 You may still feel the need to steel yourself with a drink (or two or five) before your speech. Pace yourself. Try to limit yourself to one drink per hour before your moment in the spotlight. No matter how great your speech, people will be able to tell if you’re stuck like chuck. Remember, you’re supposed to have the groom’s back: it reflects poorly on him if his best man turns out to be a dipsomaniac. 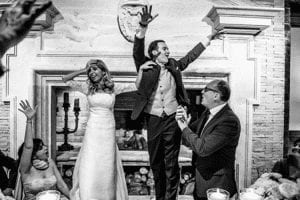 6. Avoid Proposing to the Bride

Maybe you’re one of those best men who’s secretly smitten with the bride. You know, like that guy with the flashcards in Love, Actually. After all, the bride is gorgeous and smart and you have been in love with her since the first time you saw her, 10 years ago. It was you who introduced the groom to the bride. You never imagined she was going to fall in love with that idiot. But fine. It’s all water under the bridge now. You must find a way to be the bigger man and fight back the urge to stand up and declare your undying love.

Your toast is one of your biggest responsibilities as best man, but you shouldn’t let that phase you. Just steer clear of these six common pitfalls and you’ll do fine.