Even when your friends insist, don’t let them pay for your destination bachelor party expenses. Not because paying your own way is the right thing to do (though it is), but because it’s the politically savvy thing to do.

OK, if your bachelor party is one night out, then it’s fine to let them pay for you. After all, what’s the price of a fancy dinner, several shots of Maker’s Mark, and maybe a lap dance or two between friends? But as soon as plane tickets and hotel suites start entering the conversation, it’s time to put your foot down and pony up.

Think of this as if you were a politician, and you’ll see there are plenty of reasons to pay your own way at your own bachelor party.

Money is the chief anxiety of any wedding, both for you and for your guests. Your groomsmen will already be putting on a brave face about all the cash your big event is costing them: why add to their anxiety? By relieving them of this extra financial burden, you’re showing generosity, responsibility and leadership.

At some point in the near future, the shoe will be on the other foot. You will be putting money towards the bachelor party of one of the guys about to throw yours. Basic etiquette demands reciprocity: if your groomsmen foot the bill for your entire bachelor-party experience, you’ll be expected to do the same for theirs.

That adds up, especially if you have a lot of friends who are throwing bachelor parties. But by establishing a precedent with your own bachelor party, you’ll insulate yourself from having to lay out a fortune every time one of them decides to get married. 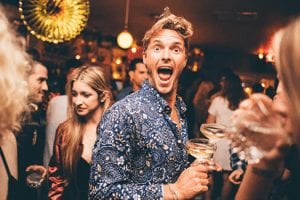 He who controls the purse controls the party. This fundamental law of politics applies to the bachelor party as much as it does the wedding.

When the groom is contributing his full share to the festivities, he essentially has veto power over any aspect of the event. If he’s along for the ride on someone else’s tab, he’s basically a glorified plus-one.

Don’t want to go parasailing in tuxedo-themed Speedos? Your “yeah…no” will have more sway if you’re one of the people paying for it.

Politics 404: You’re Executing The Duties OF Your Office

In only a matter of days or weeks, you’ll be a married man. Aside from having a child, getting married is the chief sign that you and your wife are now, undeniably, adults. Here’s one thing adults do that kids don’t: they pay their own way.

If your bachelor party involves plane fare, hotels, boat rentals or any other big ticket item, you need to pay your own way. You and your closest guy friends will have a better time if you do.