Arrive at Montreal-Pierre Eliiott Trudeau International Airport (named after the former prime minister and father of current prime minister, Justin Trudeau). Speaking French is cool, but if you can’t get past “bon jour,” don’t  worry: the city is bilingual. Montreal finally has Uber, so get a fancy UberSelect (roughly $55 to downtown), and arrive at Le Germaine Hotel in style. Service here is going to be stellar. The Apartment Suite spans two levels, like a duplex apartment, with all the amenities you could ask for (including washer /dryer, which will come in handy) as well as flexible check-out times. 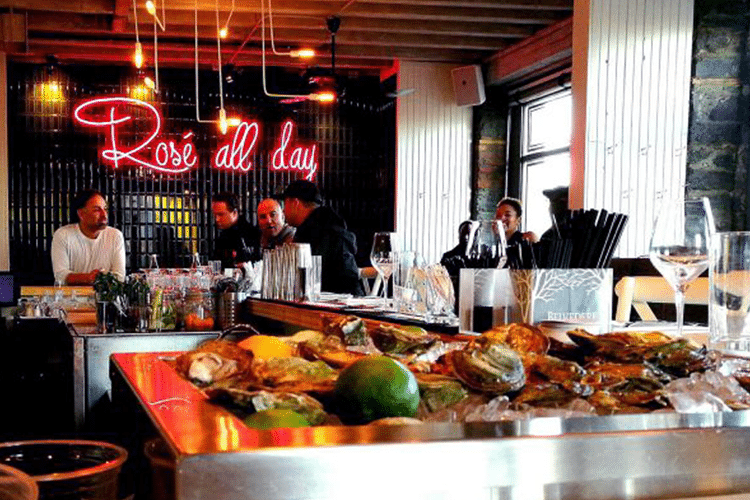 Montreal’s weather is beautiful over spring and summer, so grab a patio table at Seasalt & Ceviche Bar in Montreal’s old port. The cool breeze from the river will go nicely with the fresh lobster rolls and ceviche at this happening spot. 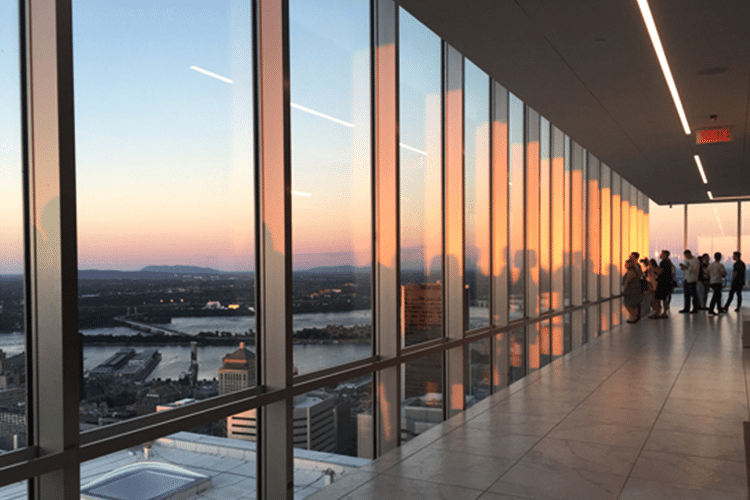 After lunch, take a leisurely stroll through Old Montreal, chock full of history and culture. Montreal celebrated its 375th anniversary in 2017, so you know you’ll see tons of centuries-old architecture, vintage attractions and old-school businesses. Make a beeline to Au Sommet Place Ville Marie. The observation deck has unparalleled views of Montreal, and it also doubles up as a gallery with 50 images from the city’s archives and 55 video portraits. While you’re here, grab a beer at Les Enfants Terrible, a restaurant and bar with predictably stunning views. http://ausommetpvm.com/ 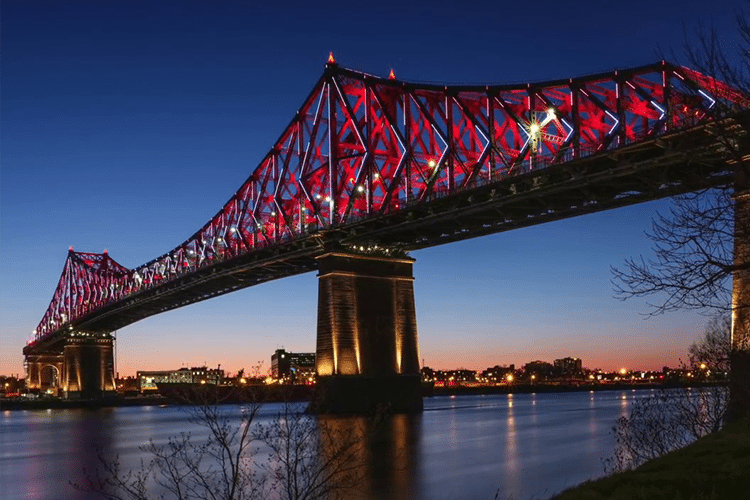 In celebration of the 375th anniversary, the city of Montreal enhanced this historic bridge with a new interactive digital lighting system, which is lit up in theme with the season. It’s one massive, visually stunning art installation expressed through light. If you want to get really up close and personal, hop aboard Montreal Historic Discoverers Cruise, which traverses the St Lawrence River. Sunsets, beers, good times: the whole package. 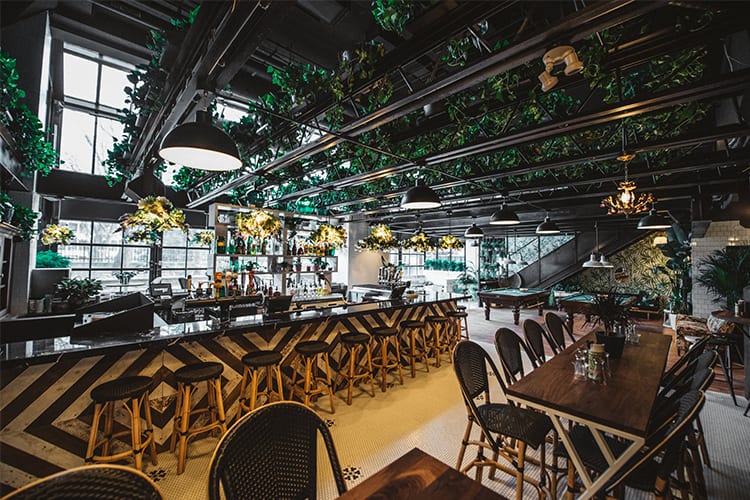 This new, Asian-inspired restaurant is actually a beer garden. It combines Japanese Zen touches (expect potted plants and ivy), with a Montreal grunge feel. It takes skill to make Zen and grunge work together, so you know you’re in good hands. While it’s a great spot by day, you’ll come here at night to chill out among the sofas, play a game of pool, order some ridiculously delicious Asian dishes and drink local brews.

That beer at Kampai wasn’t your last. You’re going to hit up all the best breweries in the city for the ultimate beer bar crawl. You’ll start at Brutopia, which is known as the city’s best douche bar. But it’s a fun, three-level microbrewery douche bar, where frat bros like to congregate and talk about world peace. Just kidding. They bro-out with bro talk and they do bro things like beer chugs. So prepare to party on. Next, head to Dieux du Ciel!, a 20-year old neighborhood pub that serves up a vast array of homegrown house brews as well as imports (with more than 165 brews to choose from), both in a packed brasseries and outdoor patio. You’ll also head to Le Saint Bock, a sports bar that gets packed to the rafters on weekends. The place is known for its “Beer Bible,” a selection of 800 (not a typo: 800) beers to choose from. You complete the circuit at Hurley’s Irish Pub, a laid-back pub where you’ll be downing Guinness with new a bunch of new faces you met because everyone’s so damn friendly here. Feel free to raise hell because this place gets boisterous. Cheers to beer bars. 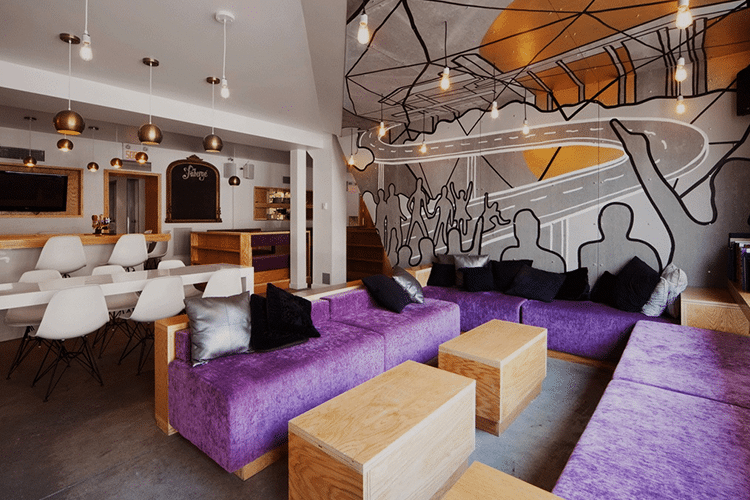 You don’t mind waiting in line to get blitzed at a cub, so you have no excuse to not wait in line for a delicious brunch. Since it opened in 2010, Faberge has become an essential Montreal brunch staple. You’ll find everyone here–from hungover hipsters sipping their coffee with a dazed expression to millennial parents toting kids and taking Instagram photos of their perfectly plated brunch dishes. It’s a simple and clean restaurant that gets ample morning sunlight from floor to ceiling windows. It has a great patio, too. Order a crepe, omelet (their specialty) or a sweet or savory waffle (like chicken waffle or S’mores waffle). There’s also every kind of juice imaginable for health nuts and, of course, excellent Bloody Mary’s. http://faberge514.com 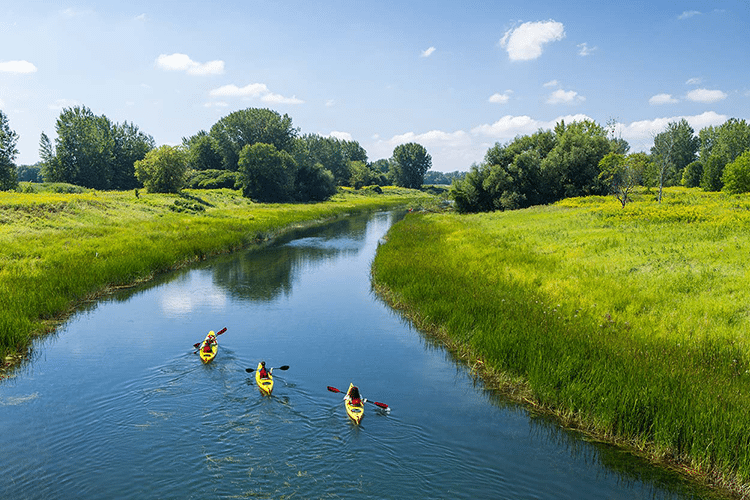 If the streets seem dead on this glorious afternoon, it’s because everyone is taking advantage of the weather and heading to the parks to work off their hangovers. Montreal is sprawling with parks, rivers, forests and beaches (yes, beaches), so put on your kicks for outdoor splendor. We’re sending you to Iles de Boucherville National Park, which is teeming with white-tailed deer, local birds and, the most exotic of all, French Canadians. Sign up for manly activities like canoeing, hiking or fishing. 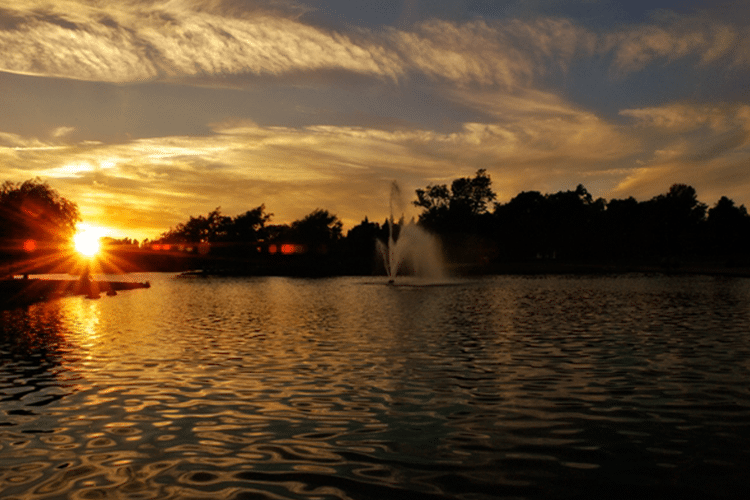 If you’re visiting Montreal in the warmer months, head to Cap-Saint-Jacques Nature Park, a thirty-minute Uber from downtown. It’s the only beach in the city–and because locals like to keep this gem to themselves, it’s virtually tourist free. The beach is tucked away within a forest, so expect plenty of biking and hiking trails in addition to a unique sliver of beach paradise on a lake. 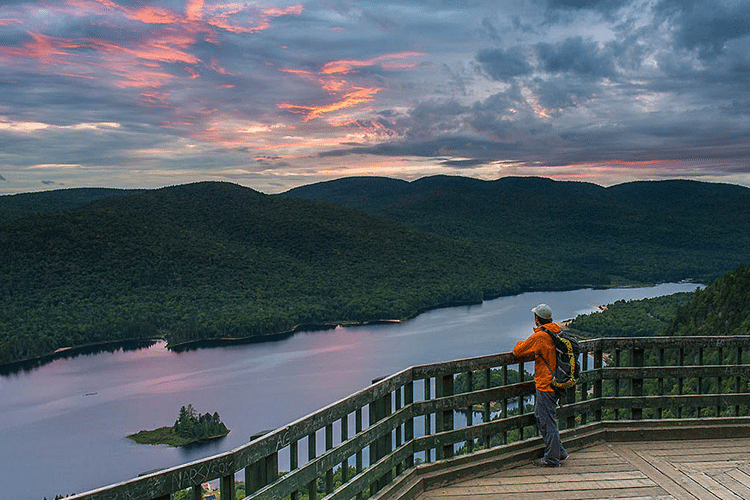 You can find shuttles that regularly leave for Mont Tremblant National Park, about a two-hour drive away. This is the jackpot of outdoor activities, which include hiking, via ferrata, skiing, canoeing and camping. The textbook setting, including some gorgeous woodlands, feels as perfect as a movie set. You may have flash backs to summer camp (of to one of the “Friday The 13th” movies, if your camp experience wasn’t so great.) Mont Tremblant is a longer excursion, but it’s worth the trek. The mountain views from 2,000-feet high summits are incredible, so think clearly before you decide to just sit it out for the afternoon. If you want views closer to home, head to Mont Royal Park, which is close to downtown (15 minute Uber ride), which offers hiking trails and great views of the city.

Go from caveman to George Clooney in a matter of hours. At Mann Spa, you can knock out kinks with deep tissue massages, get an age-erasing facial or package up for other essentials like teeth whitening, waxing, old-fashion shaves and modern haircuts. 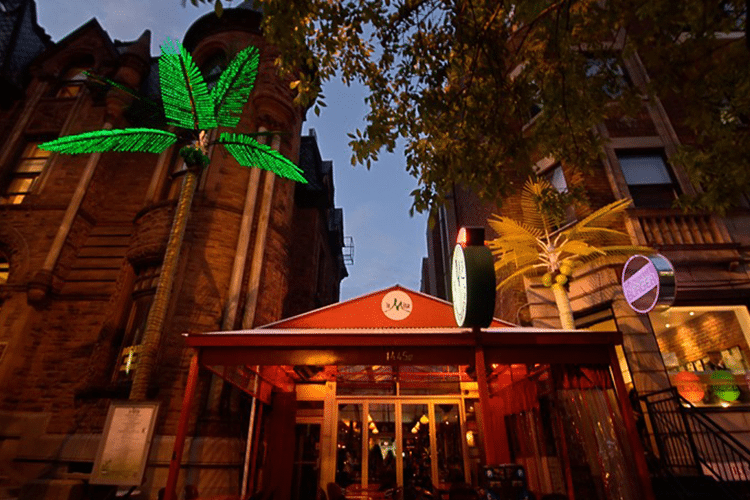 Head to Le Milsa on Crescent Street for essential bachelor-party dining (trust us: you won’t be the only bachelor party group). This churrasco Brazilian steakhouse is big on party vibes (dressed-up Brazilian dancers take to the floor for Carnival-style samba dancing) and the meat skewers are the best in town. Waiters bring slabs of meat (lamb, turkey, steak, chicken, roast beef, sausage) to your table and cut away to your desire. You’ll also find some of the best wines here, to wash it all down. While there are three locations, the Crescent Street is the most exciting. 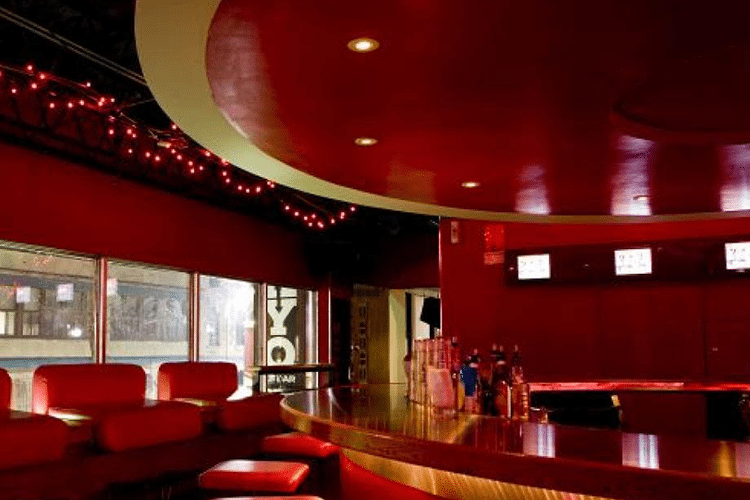 Start your bar crawl at Tokyo Bar, a high-energy hot spot with a dance floor and rooftop terrace. It’s cosmopolitan meets indie, far from a proper dive, and you’ll find all the downtown locals partying here. Live DJs pump out house music, pop and hip hop to set the vibe. While it’s chill in the earlier hours, it gets pretty nuts later on. 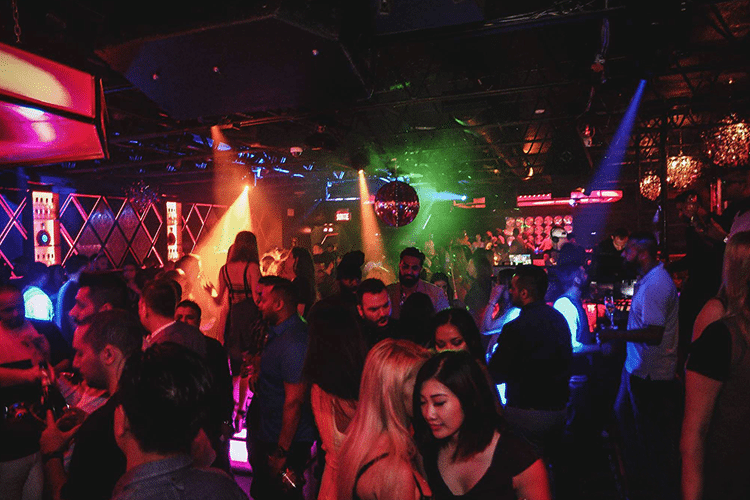 The ultimate Montreal nightclub, Muzique is all about the high-end experience. This is the place you’ll order bottle service and feel like a total gent. This is where you’ll wear a button-down shirt, slick back your hair and maybe even floss. Muzique is the club most celebrities (Vin Diesel, Tommy Lee) choose to party at when they’re in town, and you know they’re not waiting at the bar for a G&T like a chump. It’s a velvet-rope place, with corresponding prices, so leave some room on your AmEx. There’s a rooftop bar as well, in case you feel like indulging under a nighttime sky. 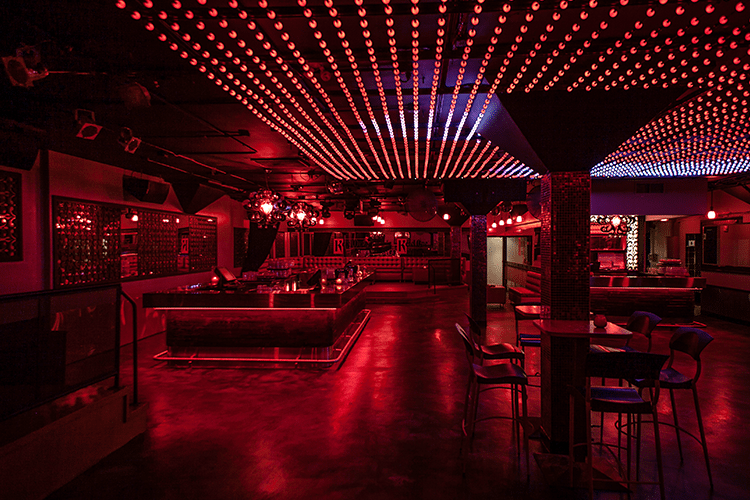 A notch less upscale than Muzique, and feeling a bit more clubby, Le Rouge offers let-your-guard-down, ego-free fun. It’s the type of place that’s proud to say they are not college-crowd friendly (so, of course, college kids try to sneak in here all the time.) There are two dance floors where you’ll hear everything from top 40, house, ’80s and pop delivered over the ridiculously good sound system. The crowd at Le Rouge is diverse, but at some point you’ll think you saw Kate Middleton. You didn’t–that’s just how the women look here. 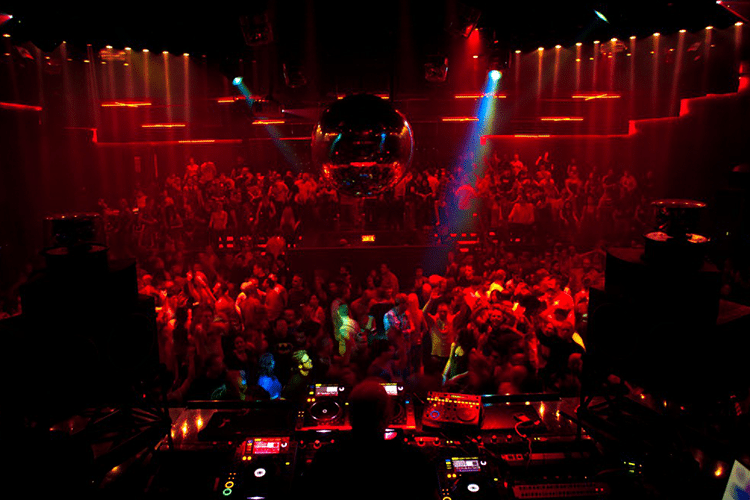 End the night at Stereo, where you’ll definitely knock back shots, pump fists and hang with your best bud, Molly. The crazy loud sound system and even crazier party vibes are extraordinary. You’ll be so hyped up that, at some point in the night, you’ll turn to your dude squad and actually say: “Can you feel the energy?!” You’ll be mortified by that the next day (assuming you can even remember the next day.) Live DJs take house and techno music seriously, so it’s likely you’ll make some raver friends and fill your pockets with party flyers by the end of the night. Stereo is that type of place where, after an hour or so, you’re so drunk you don’t remember your name. That’s a good thing.

When even the bouncers are wearing tuxedos, you know you’re in for a classy affair. Chez Paree is the ultimate strip club, where everything is a bit more… sophisticated (so they claim). The girls here are everything you’ve heard about Montreal strippers: dirty, uninhibited, sometimes irreverent, smoking hot. Expect girls of all races and sizes, some of the longest legs in Montreal and dudes who may or may not be wearing fedoras and bowties. It’s that sort of place. So, now’s a good time to start smoking cigars and using the phrase “Who’s your daddy?” (Please don’t do that last bit.) 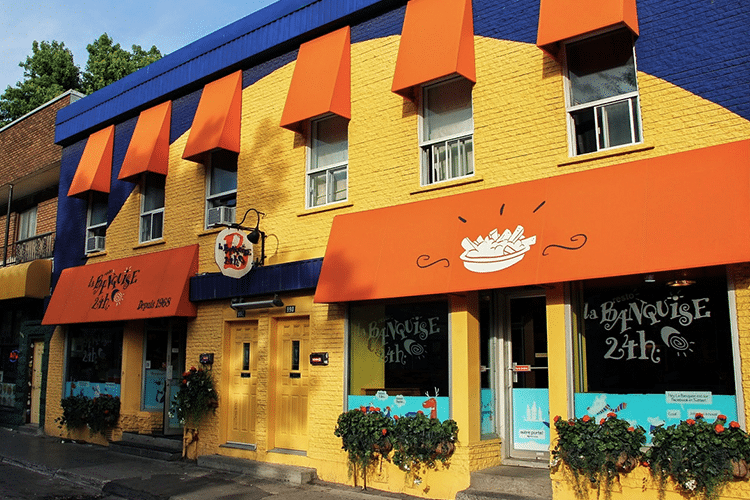 You’ve heard all about poutine. It’s the ultimate late-night food: essentially gravy and cheese curds over French fries. It’s more or less Montreal’s national dish, so you will try it at some point, but get a head start at La Banquise. The poutine here is among the best in the city… at 4 am. Which–though not at the level of a Michelin-starred meal–is still pretty good. Every clubber in the city goes to La Banquise after a night of debauchery, so it’s like the party never ended.

It’s time for another nature fix, this time without all the hard work. Head over to the Biodome, which exhibits four replicas of various ecosystems (like a rainforest and sub-Antarctic islands) under one ridiculously huge roof. It feels like something out of a 1970s sci-fi film. Either that or real life in Japan. The Biosphere is in its own geodesic dome, also dedicated to the environment, and super old school (it was built for the World Fair in 1967).

Burgundy Lion is a Montreal institution, a cozy pub with a  rooftop solarium and whiskey tasting room. The grub is better than most standard “bar food” (it’s also French Canadian: heavy on eggs and sausage). The action starts as early as 8 pm,. You’ll find a smatter of local hockey lovers (and players) just shooting the shit on the weekends, or accompanying their girls to the Lion’s famous High Tea (meh… skip it until you come back with your wife).

You love mescal. Mescal loves you loving it. Clandestino plays matchmaker. This “hidden” tequila and mezcal bar under Venice, in Old Montreal, is literally and figuratively underground. It’s surprisingly posh a cavernous, dimly lit space, and there are more than 100 tequila/mezcal varieties from which to choose. Salud! (But don’t overdo it: remember you have to fly home soon.)

Gather your best buds for some boss brews at these bitchin' bars.

The Best Day Trips Outside Of Montreal

Not all the action in Montreal takes place at night.

Do as the Québécois do: eat amazingly well at these incredible restaurants.

Some things, you just can't get in the USA.

Things are looking hot up north.

For a city that stays up late, these are some seriously nice digs.