Arrive at Denver International Airport. After you grab your luggage, you’ll hop onto the new Regional Transfer District direct rail, which connects the airport to downtown Denver (you could also dial up an Uber for $30-$40, if that’s how you roll). You are going to check into Four Seasons Denver, no questions asked. It’s one of the best Four Seasons hotels in any city, with extraordinarily thorough service, thoughtful amenities, and everything else you would expect from a luxury hotel (i.e., massive gym, outdoor pool, excellent restaurant, high-class speakeasy bar, and incredible spa). The Four Seasons is the tallest hotel in Denver, so you’ll be treated to sprawling views from the top floors, which is where your one-bedroom suite will be located. 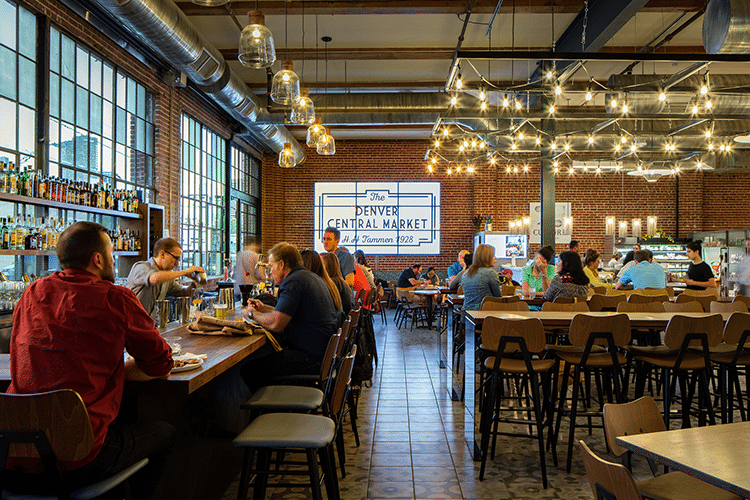 Central Market is Denver’s answer to Grand Central Market in Downtown LA or Chelsea Market in NYC. Opened September 2016, the market provides fresh produce, groceries, and fast-casual counter food from a handful of food vendors, all of whom use sustainable, organic ingredients. Don’t let that last point scare you, though: , the grub is great. We’d push you toward Silva’s Fish Market for the fresh oysters, and Izzio for insane sandwiches on fresh baked breads. There’s also chocolates, coffee and pizza.

While you’re here, check out the River North district, one of the fastest growing neighborhoods in America. RiNo is hipster, artsy, and progressive, and it brings a fresh new feel to Denver. It’s still a little gritty and rough around the edges, but it’s where all the action is these days. Breweries, bars, restaurants, and boutique shops mix it up with condos, parks, art galleries and warehouses. The entire neighborhood has tons of alleyway street art (not exactly Banksy, but you can see a cool piece or two) so there’s plenty to ponder, especially after you spark up a joint (bought legally here).

If the street art has put you in the mood, check out MOCA (http://mcadenver.org), founded in 1996 as the first dedicated home for contemporary art in Denver. Almost a decade ago, it opened a new wing, and hidden skylights fill the spaces with natural light. There are five galleries on two floors, with plenty of amazing artwork to keep you busy. We also recommend Denver Art Museum, open since 1893: you’ll want to check out the Native American collection, one of the biggest in the country.

Four Seasons Denver’s signature restaurant, Edge, is helmed by chef Simon Purvis, who has been with the hotel for more than 20 years. He knows what hungry dudes want, and he doesn’t hold back. Using local products and seasonal produce, Purvis serves innovative dishes, though you can also chow down on some good old Colorado-ranched beef, seared to perfection over a pecan wood-fired grill. We’re also not going to dissuade you from the lobster mac n cheese side, which is basically a meal in itself.

Red Rocks Amphitheater is one of a kind. The naturally formed concert venue/open-air amphitheater is the world’s only 10,000-seat venue made out of rock. Just imagine the acoustics. The amphitheater is impressive on it’s own, but when paired with the backdrop of Colorado’s night sky, it’s stunning. Red Rocks has hosted legendary show from The Grateful Dead, The Beatles, Rush, U2 and others), so you know they mean business.

If sports is more your thing, and you’ve planning your trip right, you can catch a game at the legendary Coors Field. When there’s a Colorado Rockies game going on, downtown is basically a ghost town anyway. You’ll want to be in the bleachers with everyone else. Let the entire city know you’re in town with some Jumbotron action. If you’re wearing some Rockies gear and none of your groomsmen look like they’re murderers, you’ve got a decent shot at getting yourselves up there. http://colorado.rockies.mlb.com/col/ballpark/tours

It’s never too early to drink in Denver, so start boozing up. Denver takes its adult beverages seriously: the city has almost 100 breweries and a smattering of distilleries. Start at Great Divide, the preferred stomping ground for pre-noon beer geeks. It recently opened a huge facility in the River North district, so you can take a tour of the facilities while sampling the brews. If you’re looking for a stronger kick in your coffee, head to Stranahan’s Colorado Whiskey for the necessary splash. Stranahan’s was the first modern micro-distillery to legally make whiskey in Colorado, and it’s known for an intense, 94-proof, small-batch product that has the power to make grown men cry. Make a toast to day drinking, and buy a few bottles to go while you’re at it.

If you had a little too much of the fun juice, sober up at Hop Alley, whose name refers to the original Chinatown. The hip Chinese-American joint serves Asian flavors (soy and garlic) with plenty of that necessary spicy kick to help level out your buzz. The fried chicken plate with dried chilis and sichuan peppers hits all the right spots and you might want to get another order to take back to the hotel. It’s that good.

45 hours (3 pm get geared up for outdoor adventures)

Now’s a good time to head to Boulder, which is basically the Woodstock Nation in 2017. The hippies here have plenty of granola, but in millennial style (as in: their clothes fit and they have $80 haircuts, but they also smell like patchouli). Bohemian athletes and adrenaline junkies alike get their hands dirty with rock climbing, which is a popular activity in this neck of the woods. Over in Lyons, mountain bikers are in heaven, and nearby Clear Creek is home to exhilarating whitewater rafting.

Get back to your hotel in time for one of the last available spa appointments of the day. A number of athletes book treatments here, so you can assume the deep-tissue massage you’re about to receive will be next level. But even before you get properly rubbed down after some muscle-pumping outdoor adventures, catch the last rays of sunlight at the outdoor pool, head to the steam room and indoor whirlpool, then kick back in the relaxation area.

Like Central Market, The Source is another historic building converted into a new, high-end complex, only it’s all about dinner here. The best restaurant is Acorn, one of the hottest restaurants in Denver (its sister restaurant, Oak on Fourteenth in Boulder–has also racked up a lot of accolades). Spanning two levels, Acorn serves small-bite, new American comfort food (you can order in group portions, too). Definitely get the agnolotti, which is made in-house, or the oak-grilled prime rib eye.

Buy some weed (it’s still legal here, at the time of writing), and hit up some of the coolest bars in Denver. Start at Green Russell, which is a prohibition-style speakeasy bar. Sure, the staff are notoriously “like, whatever” but the bar is quirky and exciting, especially for Denver. Think red vinyl booths, bartenders in neat uniforms, and really complicated (yet perfectly executed) craft cocktails. http://www.greenrussell.com

After you’ve had a cocktail that may or may not have had a live plant in it, head to Williams and Graham, another speakeasy bar in a hidden corner bookstore. It takes speakeasy to a way-too-serious level, but it is going to be great. All the cocktails are progressive takes on the classics and they feel like they came from a lab. They do not take reservations, and it’s a small space, so you’ll have to stand in line at peak hours. The cocktails change with the seasons, but a standard is the W&G Rock & Rye (Rittenhouse rye whiskey infused with lemon peel, orange peel, cinnamon, clove, horehound, and seasonal fruits).

Now, the mother of all speakeasies is at Four Seasons Denver. But you can’t just walk in, because…it doesn’t exist. What you do is call the hotel in advance, ask them about the speakeasy, and they set up a makeshift, 1920s-style, private speakeasy bar in a coat closet in the ballroom, equipped with bar, mixologist, the works. It’s a true “speakeasy” bar in that it only exists by word of mouth, and perfect to hang out in with the boys.

Gentlemen’s clubs are seemingly everywhere in Denver. OK, maybe not. Maybe it’s just that every bar looks seedy in that cowboy-on-the-prowl sorta way. Even still, make a beeline to La Boheme. It’s definitely the quirkiest strip club, and it’s so popular with the locals, everyone just calls it LaBo. It has a vintage theater, heavy on burlesque, and there’s plenty of local cowgirls on the five stages. It’s a big statement to say you’ll find the hottest girls in Denver here, but you’ll find the hottest girls in Denver here. It’s also perfectly located downtown, so no weird Uber or backroads at 4 am. http://labohemegc.com

Denver Diner is where you’re going to run into other bachelor party groups at 4 am. Stories to tell, stories to tell. Get a burger, breakfast, pasta, whatever floats your drunk boat, because you can’t go wrong at Denver Diner.

Sleep in, then start your last day with light-and-easy gourmet grub. One of Denver’s most happening spots (and relatively new on the brunch front), Scandinavian-inspired Call is a casual place in River North. Fresh cured salmon sandwiches, salads, fresh juices… you know, healthy stuff. It gets so much natural light, you may not even need that coffee fix. Cali is a tad hipster (think tiered-bench seating and bar stools with hanging tin can phones), but like we said it’s also casual, so feel free to show up in a Michael Jackson “Thriller” jacket, or a pair of sweatpants, or whatever you want. It’s all good here.

After you brunch up and chill out, make like a local and hit up some of the cool places outside Denver, where the Rocky Mountains can be your backdrop. Denver is extremely bike-friendly (about 85 miles of trails), but head to Lyon if you want heart-pumping mountain-biking action. If you prefer upper body workouts, take out a kayak at Confluence or Washington Park. Those back muscles don’t build themselves, and you’ll definitely meet other hungover bachelor party groups in the same boat (not literally).

Kill two birds with one stone at FnG. This swank, 1970s-inspired cocktail lounge and restaurant is helmed by local chef hero Troy Guard, who knows good food and booze. It’s Denver (laid back atmosphere, great grub, crafty cocktails, tattooed hippies in the kitchen) with a rock-and-roll twist (vinyl records on the walls and vinyl furnishings). Also: where else are you going to find steak meatballs and Colorado bison enchiladas on the same menu?? http://fngrestaurant.com

This is not a typo. Death & Company in New York City (the bar that basically invented the craft cocktail and moustached mixologist slinging it) is opening a second location about a decade after it originally premiered. It’s going to be swank, it’s going to be high-class, and it’s going to have the best cocktails in Denver. Look for it in the lobby of the new Ramble Hotel by spring 2018. For now, grab a nightcap at local hot spot Greenlight Lab, the latest speakeasy in Denver (it’s in the alley behind Central market). It’s seriously like a cocktail lab (think: cherry-wood smoked honey for tequila drinks and an involved, ten-step process to create cocktail ice). http://www.theramblehotel.com

Make some time for fun outside the city limits.

Here’s Where To Get (Legally) High In Denver

While you can't smoke a bong in front of City Hall just yet, Denver is definitely one of the most legal weed-friendly cities in America.

When staying in the Mile High CIty, you should go for the best suites the town has to offer.

Before you cross city limits, check out all the bachelor party-friendly outdoor activities that Denver itself has to offer.

Dining In Denver: The Hottest Restaurants

Because the wildest party of your life has to start with a really good meal.

These are the 'only-in-Denver" activities that you must take part in (or you'll always regret it.)