For sports lovers, Pittsburgh, Pennsylvania is a city steeped in championships and athletic reputation (well, except for maybe the Pirates), making it a great bachelor party destination. At any time of year, there’s almost always a game to tailgate at or attend (just bring your rain gear, because the Steel City almost gets as much downpour as Seattle). It’s also one of the most affordable cities in the United States, frequently topping the list for its livability.

But you’re not planning on spending more than three days (for now). With that in mind, let us tell you that Pittsburgh has become more renowned for its cuisine and breweries in recent years. There’s no bad time to have a bachelor party here, except maybe the winter when snow can keep everyone indoors. But given how fickle Western Pennsylvania weather can be, just give it a minute or you can take a look elsewhere.

If you’re throwing a Bachelor Party weekend in the ‘Burgh, here’s all of the fun your crew can cram into 72 action-packed hours.

From the Pittsburgh Airport, take an Uber XL to the Hyatt House in Pittsburgh’s South Side Works section of the South Side. While there are trendier places to stay (traipse with the hipsters at the Ace Hotel in East Liberty), this hotel is close to South Side bars and Downtown, making it the most convenient for nightlife and more affordable (free breakfast!). It also includes a terrace with a fire pit/gas grill and an H bar, with snacks and drinks, for pre-gaming. The hotel’s riverfront location and patio offers a picturesque view of the mighty Monongahela River.

For lunch, you don’t have to go far. The German beer hall Hofbrauhaus is just a few steps from the Hyatt House. Choose from four German lagers, as well as a monthly concoction (and if you buy a liter of any lager, you can keep the stein for $11, which makes for a great souvenir). The Hofbrauhaus also has special brews for events like Oktoberfest. Munch on potato pancakes, sausage, pretzels, and more, and if the weather is right, chill at the beer garden in the back, right along the river. 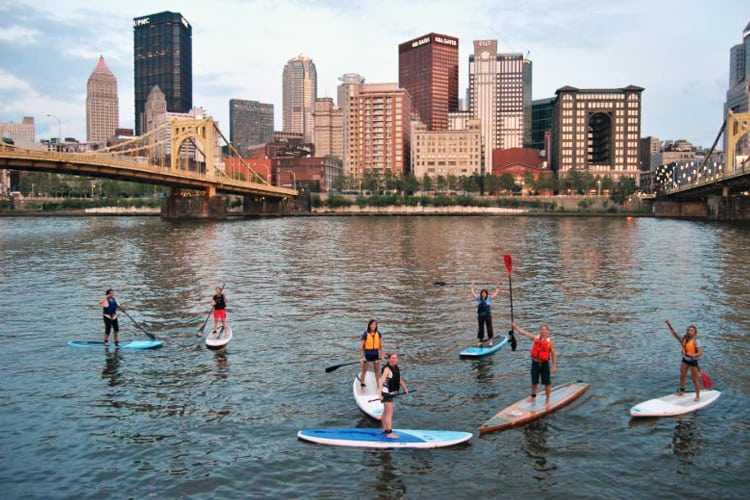 Since you’re close to the river, if it’s spring to early fall, it’s the perfect time to go stand-up paddleboarding. You’ll get to explore the city in the most awesome way possible—on the water, navigating your way under bridges, and past iconic displays like PNC Park. Contact SUP3Rivers to RSVP rentals. If the weather doesn’t cooperate, the REI located in the South Side Works serves as a fun indoor option, which includes the REI Pittsburgh Pinnacle, a 34’ replica of one of America’s “most classic climbs”: the Castleton Tower in Castle Valley, Utah. Also, just a tiny reminder to make sure you pack properly.

Take an Uber XL a mile down East Carson Street (or explore the South Side with a walk) to Nakama Japanese Steakhouse and Sushi Bar. Reserve a hibachi table for your party and get fired up for your night out as you watch chefs create delicious creations right in front of you. 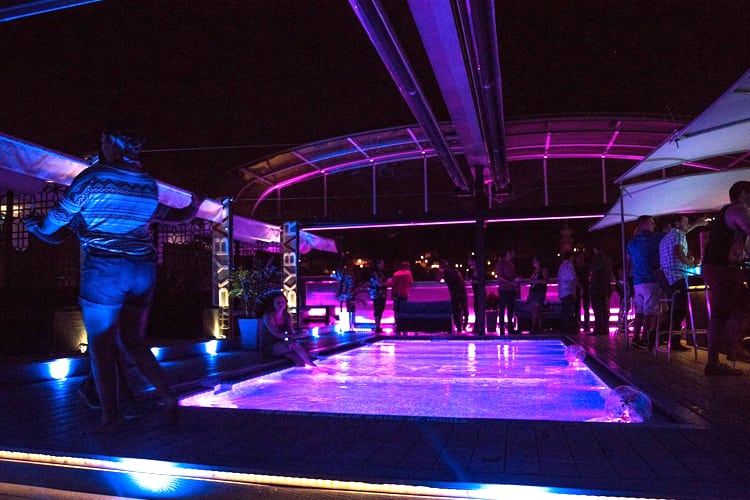 To kick the night off with “Cheers” on the roof, you have a couple of options. Just 70-feet from Nakama is Skybar atop the Diesel Club Lounge. This bar transports you from the blue-collar, Rust Belt vibe of the city to an L.A. nightclub, complete with a rooftop pool that opens during the summer. It also has one of the best views of the South Side. If your party isn’t feeling like Keepin’ Up with the Kardashians, just pop a few doors down to Local Bar + Kitchen, which has an eclectic selection of beer and an equally great rooftop view. They’ll probably be showing the game (any game) on TV, too.

The South Side is known for its bar crawl scene, and after you do rooftop drinks, you’ll want to hit any and all of these bars: Mario’s South Side Saloon, the Smiling Moose (which usually has live music), Carson City Saloon, Fathead’s Saloon, the Tiki Lounge, and Jekyl& Hyde (year-round Halloween-themed bar). 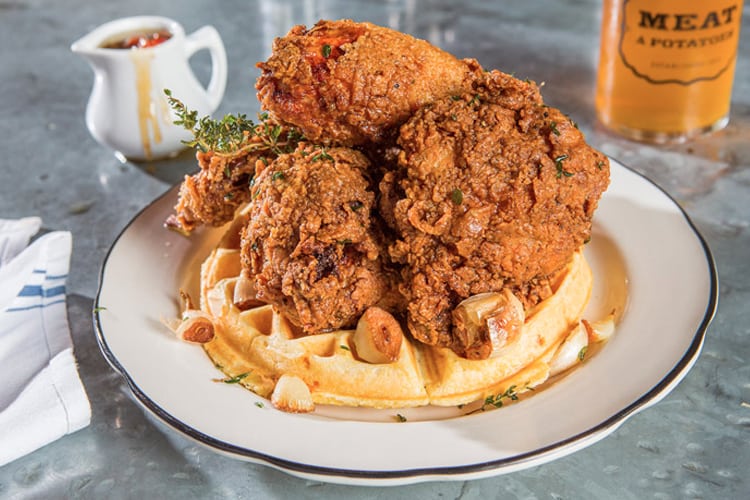 Up and at’em! If you want some bragging rights to take home with you, put Meat & Potatoes on your dining list. One of the most sought-after dining spots in the city you must make sure you get reservations at least a few weeks in advance (or maybe even before the groom even met his fiancé!). Chicken & Waffles, Stuffed French Toast, and Steak and Frites are just a few of the brunch menu items, and of course, there are libations and a Bloody Mary Bar. This is also the best place to spot any in-town celebrities (Rachel McAdams and Jake Gyllenhaal dined here, woo!) or Pittsburgh Penguins.

While you’re Downtown, add some class and sophistication to your weekend and head to the Blend Cigar Bar located on the first floor of the Koppers Building, just a six-minute walk from Meat & Potatoes. Marvel at the Art Deco lighting and historic interior as you enjoy manly drinks and puff on cigars. Plus, the large glass windows allow for ideal people-watching in the city (although they’ll probably be watching you, too, wishing they could join). This might be the pinnacle of manhood, fellas: Drinks that put some hair on your chest, smoking cigars, and making people wish they were you. It’s like you’re friggin’ Don Draper.

5 p.m. Dinner at The Commoner

On the bottom floor of the Hotel Monaco resides The Commoner restaurant (go left from the ceramic dog!). But despite the name, the food is not-so common, with appetizers like crispy cauliflower, sweet potato bisque, and Scottish salmon. For pickier eaters, there are also mainstays like burgers, ribeye, and chicken dishes. Get a drink with dinner (“signature” cocktails created by The Commoner team members—the menu includes their initials next to their drinks), but save room for a beer at the rooftop Biergarten, open in the warmer months.

7 p.m. Watch the Pirates, Penguins, or a Show 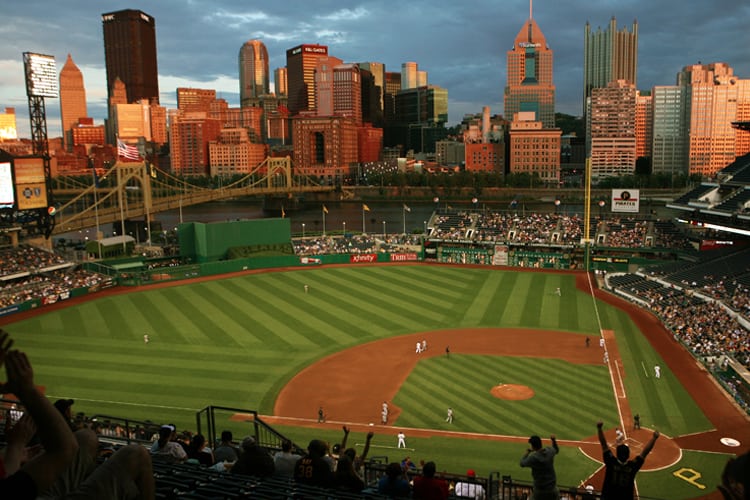 Depending on what your group wants to do, you have a lot of options. If it’s spring through late summer, you could catch a Pirate game at the iconic PNC Park (one of the best ballparks to see a Major League Baseball game—just not a playoff one). In the fall through winter, there might be a Pens game going on at PPG Paints Arena, but if there isn’t a game, there might be a concert or cool show. Across the Clemente Bridge to the North Shore, Stage AE generally has a lot of concerts, too, and right next to it is the Rivers Casino if you’re feeling lucky.

Uber it on over to the Strip District. Tourists and locals alike can’t resist the Strip District on the weekends, whether it’s for cheap produce, black-and-gold regalia, or amazing eats. Pamela’s in the Strip District is commonly known as a must-eat (former President Barack Obama reportedly said they had the best pancakes he’d ever eaten). However, go to an ATM beforehand, because it’s cash only. Also, be prepared to wait a little, as on the weekends the lines wrap outside the building.

While you’re in this neighborhood, you may as well check it out and walk around (maybe even get a few souvenirs). There’s so much to absorb here, from the Pittsburgh Macaroni Company to Grandpa Joe’s Candy Shop to Yinzers sports memorabilia. A trip to the Strip District is a true Pittsburgh experience. 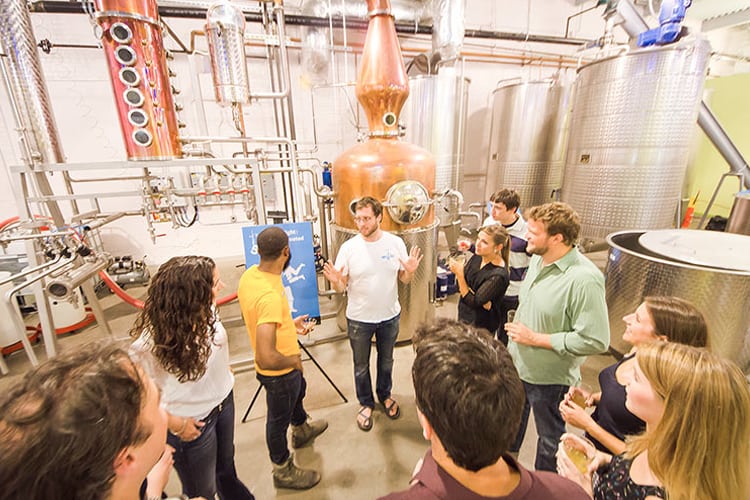 Wigle (pronounced “Wiggle”) Whiskey is just a street behind Penn Avenue on Smallman Street, so this is the perfect opportunity to do a whiskey tour of the distillery. Public tours are generally every Saturday, but if you’re interested in doing a private tour and have at least 12 people, you can contact them to set up a tour for you. At about an hour in length, the tour starts with a cocktail, takes you through the distillery process, and includes the history of the Whiskey Rebellion.

If you’re not a whiskey group, East End Brewing, also not far from the Strip District epicenter, includes brewery tours, pints and taster flights, and growlers. Tours are anywhere from 30 minutes to an hour, for every kind of beer drinker (from rookie to the seasoned brew fan). 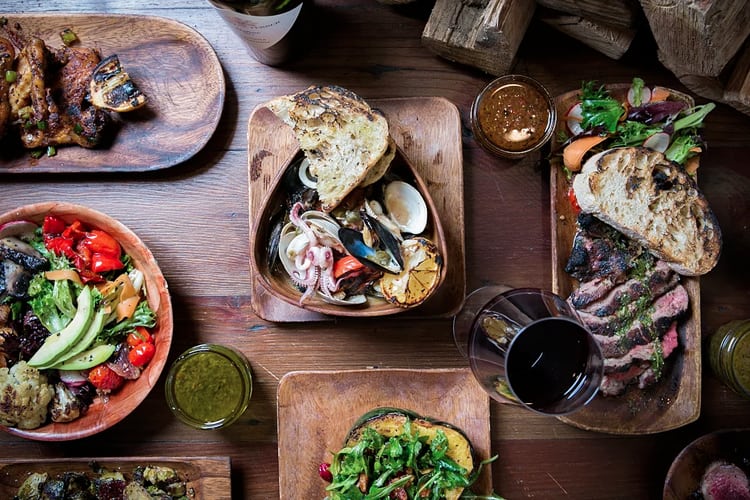 Gaucho is the No. 1 rated restaurant in Pittsburgh on Yelp, known for its Argentinian wood-fired meats and sandwiches. Just be prepared to stand in line. You’ll notice that there’s always a line for people wanting to get food in Pittsburgh, and this is because Pittsburghers are willing to wait for good food.

If you’re feeling thirsty and maybe a little sacrilegious (and sacrilicious), up the road on Liberty Avenue is the Church Brew Works, a church-turned-brewery/restaurant. The altar contains vats of beer for brewing, and it’s quite a sight to see (especially if you grew up going to Sunday mass). Beers include punny brews like Celestrial Gold, Pipe Organ Pale Ale, and Pious Monk Dunkel.

Head back down toward the Strip District (how aptly named) and end the night at Cheerleaderz Gentleman’s Club on Liberty Avenue, where you might catch your favorite AVN star (don’t pretend you don’t know what that means). If you went to a Pirate game or Pens game earlier in the day, keep your ticket stub for discounted admission. Or if you reserve your party ahead of time (minimum 10 people), you can get special privileges like an open bar for two hours (beer only). This strip club has been voted Best in Pittsburgh by the City Paper for four years in a row, so it’s ‘Burgh approved.

Pittsburgh Airport is a solid 20 miles/30 minutes from your hotel so leave just enough time to get out of Steel City and still get in some decent rack time. And if you guys need any further helping in planning this adventure, then take a look right here.

We’ve organized 50 epic bachelor party ideas into categories for quick browsing, including everything from inexpensive to splurge-worthy activities.

Thinking of heading south of the border for your bachelor party festivities? Here's our guide to the best places to party in Cabo San Lucas, Mexico.

Thinking of heading to Spain for an epic bachelor party? Here's our guide to the best places to eat, stay, play, and party in beautiful Barcelona.

Thinking of throwing the ultimate bachelor party abroad? Here's our guide to the best places to eat, drink, stay, play, and party in Costa Rica.

From the best places to stay and eat to the best clubs and bars in the city, here's your go-to guide to the ultimate bachelor party in Scottsdale, Arizona.